BLANK CULTURAL CANVAS TO WRITE UPON? 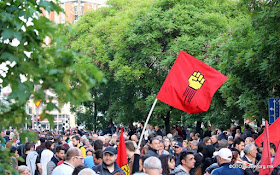 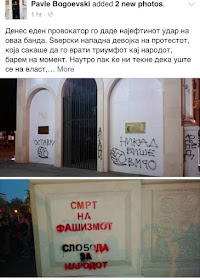 TEAM UZUNOV contacted the Serbian Foreign Ministry, and Canvas, as well as Canvas founder Srdja Popovic to comment. But as yet no responses have been forthcoming.

However, the Canadian Embassy in Belgrade, Serbia, which also covers Macedonia did release a statement to TEAM UZUNOV over the alleged involvement of Serbian activists from Canvas:

"Canada is closely monitoring developments in Macedonia, including the recent protests.

"We call on the Government of Macedonia to respect the rights to freedom of expression, association and assembly.

"We are aware of reports of vandalism, and urge all protestors to demonstrate peacefully."

Australian Embassy in Belgrade has sent two staff to Macedonia for the crisis.

The Australian Ambassador to Macedonia, Serbia, Montenegro, and stationed in Belgrade, Mrs Julia Feeney made this comment to TEAM UZUNOV:

"I have two staff in country at the moment monitoring the overall situation,” she said. "There are many issues [to deal with]." 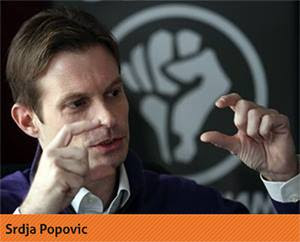 A Serbian “Internationalist” group, NGO, which in 2000 brought down the Slobodan Milosevic regime in Serbia. Milosevic pushed for a Greater Serbia, a concept that was anti Macedonian, Croat, Albanian, Bosnian.

Self-proclaimed "Romantic ultra Serb nationalist" Vojislav Kostunica linked up with OTPOR and the Serbian Orthodox Church (which doesn't recognise the Macedonian Church) to take down, quite correctly, Milosevic. Link: 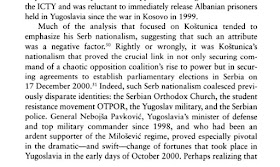 Otpor was founded by Srdja Popovic, a close confidante of politician Zoran Djindjic, later assassinated as payback for his role in bringing down Milosevic.

Djindjic, a political opportunist, went from Serb internationalist to nationalist, cynically became a one time supporter of Bosnian Serb war criminal Radovan Karadzic, and then back to being a non nationalist. Djindjic has been turned into pro West martyr though the truth might be that he was a cynical political operator. 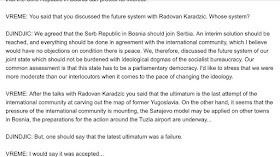 
Popovic and his Otpor - Canvas group teach people how to bring down governments by non-violent means. If the vandalism claims a true, then Canvas has changed its modus operandi in Macedonia by employing violence.

Furthermore, assuming the allegations are true--TEAM UZUNOV has not had any reponse from the Serbian Foreign Ministry nor Canvas to deny the charges--what are Serbian activists doing in Macedonia? Wouldn’t that constitute Serbian Cultural Hegemony? 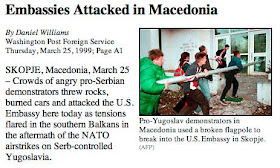 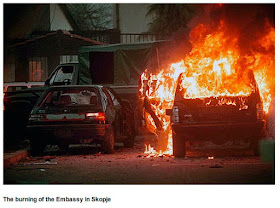 In 1999, Serb nationalists went on a rampage in Skopje, Macedonia burning down the US Embassy in protest of NATO’s war in the then Serbian province of Kosovo. If the vandalism charges against Canvas are true, then it remains a contradiction that the NGO which brought down tyrant Milosevic now indulges in Serbian cultural hegemony in Macedonia.

No Macedonian activist has been found to have vandalised Serb monuments in protest of the Serb government’s rehabilitation in May 2015 of ultra nationalist and controversial World War II leader Draza Mihailovic, who was anti-Macedonian.

Ironically, current Serb Prime Minister Alexander Vucic, a former ally of ultra nationalist Vojislav Seselj, has now presented himself as being pro West. The United States has gone out of its way to woo Serbia away from Russia’s orbit - with the release of Seselj from the Hague war crimes tribunal, much to the chagrin of Croatia.

Western media outlets have talked up Vucic’s regime, despite having one of the worst human rights records in the Balkans and a large number of journalists imprisoned. Oddly, Canvas have not tried to take him down, why?

Vucic is playing a clever balancing act between Washington and Moscow in the hope of getting a better deal.

It remains unknown where Canvas fits into the picture with Vucic, as it is an NGO not aligned with the Serbian government and eschews (opposes) Serbian nationalism but now that Vucic is being courted by the US, the constellation of stars may have changed. Canvas has been accused of being a pro-CIA front.

SERBIAN CULTURAL HEGEMONY IN MACEDONIA? - It remains a touchy subject. Team Uzunov has tried to open up an honest debate about the all the pervasive influence of Serbian culture in Macedonia. We have contacted Macedonian journalist, Sinisa Jakov Marusic of Balkan Insight website repeated times to discuss Serbian cultural hegemony in Macedonia but have not received any response. See link.

Other genuine factors could be at play in driving the demonstrations in Macedonia, popular discontent with the Nikola Gruevski VMRO-DPMNE - Ali Ahmeti DUI coalition government (2006-2016), corruption, nepotism, authoritarianism.

American Balkanologist, Chris Deliso begs to differ and sees sinister goings on, laying the blame on the West, bogeyman George Soros as well as Canvas in pushing the protests. see link to his story.

Both sides of Macedonia’s political establishment, VMRO-DPMNE and SDSM, have this naive acceptance of the superiority of Belgrade culture, so you get those who claim to be Macedonian patriots who are easily influenced by Serbian nationalist tabloids which whip up anti-Albanian hysteria and interestingly those Macedonians who claim to be “internationalists” in the vein of Vladimir Gligorov and theatre director Naum Panovski who ape ‘Serb internationalists.”

Gligorov and Panovski going to the extreme of adopting a Serbian identity via Yugoslavist ideology. One of the reasons for a falling out between Vladimir and his father Kiro Gligorov, the President of Macedonia (1991-99) was Vladimir’s conversion to a Serbian / Yugoslav identity. Vladimir Gligorov was one of the founders of the Democratic Party of Serbia (DS) in 1988-89, of which Srdja Popovic and Zoran Djindjic were members. 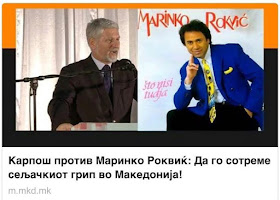 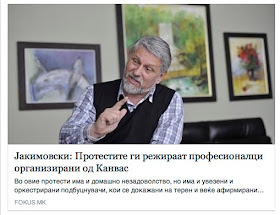 An opponent of Canvas and a political front man for resigned Prime Minister Nikola Gruevski, Stevce Jakimovski (above), Mayor of Skopje suburb of Karpos, as a Macedonian “patriot” has strongly laid into the Serbian NGO. What is interesting is Jakimovski, despite criticism from his local ratepayers, hired a Serbian turbo folk singer Marinko Rokvic, when local Macedonian artists remain unemployed. 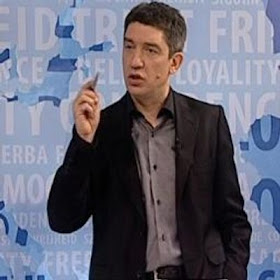 A critic of Gruevski, pundit Borjan Jovanovski (left), whitewashed the Vucic regime, in a twitter message declaring that concerns about Serbia were largely exaggerated, (see link) even though Vucic has an atrocious human rights record and recently came under fire even from the British government. see link

The irony being Vucic is a close political ally of Gruevski.

Jovanovski did not call for demonstrations over the rehabilitation of  Serbia’s Draza Mihailovic.

In terms of independent Macedonian culture, a Srdja Popovic of Canvas/Otpor, who is pro-West and not a Serbian nationalist, poses a dangerous threat as would a hardline Serb nationalist and anti-West Vojislav Seselj or Slobdodan Milosevic, who, ironically, Popovic toppled in 2000.

History has shown us that Macedonians who have adopted a distorted form internationalism via Belgrade urban or cafe culture, have pretty much converted to a Serbian identity, as did Vladimir Gligorov, the son of the late Kiro Gligorov, Macedonia’s President (1991-99).

Vladimir Gligorov is not a Serbian nationalist like say Seselj but in his naivety in trying to create a Yugoslavist utopia he adopted a Serbian identity anyway.

It’s no coincidence that Vladimir Gligorov established the Democratic Party of Serbia (DS) in 1988-89, of which Srdja Popovic became a member. 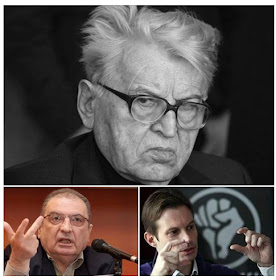 DOBRICA COSIC - working both sides of the street - internationalism and nationalism !

“...as shown by the identification with Yugoslavia as a formula of internationalism was the core of most Serbs’ national consciousness up until 1974. “

- Serb writer and intellectual Dobrica Cosic, “The Serbian People’s Great Illusion,” Politika, January 10, 1991.
-----
Meaning that the Yugoslavist version of “internationalism” was seen as another facet of Serbian identity together with hardcore Serbian nationalism. It also explains how some Macedonians ended up naively converting to a Serbian identity, such as Vladimir Glgorov, without having to be Serb nationalists.
In other words, a kind of Diet or Lite Serb cultural hegemony without the full strength version, but convertling to Serb culture nonetheless..

Dobrica Cosic started as a fanatical Titoist who later turned against his mentor Tito and embraced full on Serb nationalism. His premise was that Yugoslavism and Serbianism went hand in hand.