INTOLERANCE BY THE "TOLERANT" 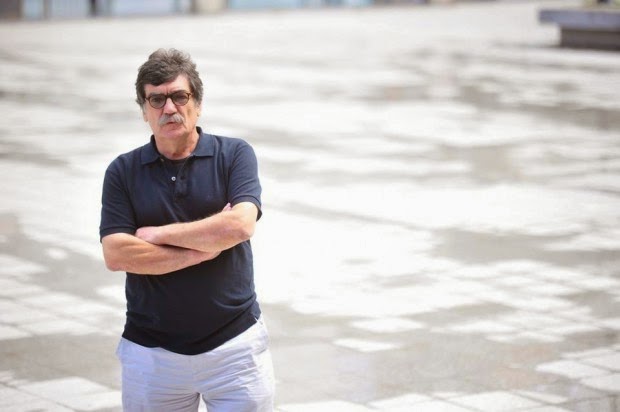 Naum Panovski: US based film maker and a "Charter member of Macedonia's City of Skopje Elite." source: Fokus

Panovski's record?
Aaah, let's see... who kept quiet before 1991 about Amnesty International complaining about Yugoslavia's political prisoners? Ahh, let's see who supported a system, Yugoslavism, which had become morally bankrupt by using informers such as pedophile priests such as Bishop Vasilije Kacavenda? In 1959 Tito's Yugoslavia criminalised homosexuality, punishable by imprisonment. It was only decriminalised in 1997 in the Republic of Macedonia; six years after independence from Yugoslavia. 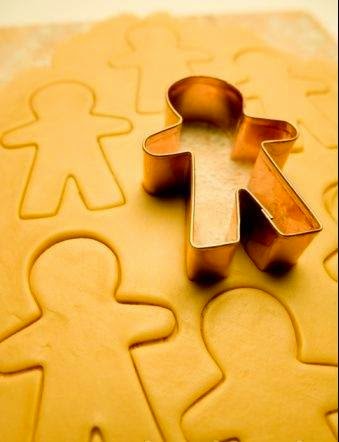 Members of Macedonia's City of Skopje elite or those who adopted a Yugoslavist Belgrade cafe intellectual pose: they criticse others for having a pack mentality, yet they all think, act and talk the same like a cookie-cutter. Where is the "diversity?"
It's ironic that this guy lives in the West... and can't stand people using their dialects but it's ok for this guy to use "official" standard Macedonian, hijacked by the elite and filled with City of Skopje terms.
Finally, we are now seeing these people really bare their teeth and remove the veneer of "culture" and reveal their true characters....
Notice how his views are intolerant....an interesting irony... He complains about American-Macedonians for having "anglicised" first names such as John and in doing so is playing the Macedonian nationalist card but is critical of others. It's called hypocrisy. Should atheists complain that his first name Naum is from the Hebrew biblical name of Nahum?
Notice the Scam if you don't view the world the way he does:
1. If you criticise the elite, you first get hit by humour and if that fails with insults, ie villagers (selani).
2. If that doesn't work, you get criticised for being a "Macedonian nationalist."
3. If that doesn't work, you get criticised for not being a "Macedonian patriot."
Can you not see how the system is designed for the elite to always win and the diaspora to lose?
We have witnessed the flipside of when Macedonians, in trying to be "cool" adopt an internationalist or in the old days, Yugoslavist position. They in effect embrace a de-facto Serb nationalist position. Take Australian soccer star Bobby Despotovski, for instance.
STRONG IDENTITY/SOFT IDENTITY: 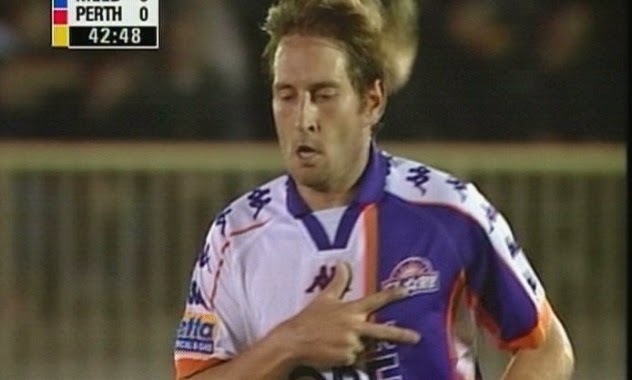 Bobby Despotovski's infamous three finger salute in 2001.
We track down the Australian Immigration records (National Archives of Australia):
SLOBODAN "BOBBY" DESPOTOVSKI - Macedonian father, Cvetko, and mother, Valentina, nee Saharov (her parents Martin & Margareta Saharov from Sevastopol, Crimea, Ukraine/Russia). Cvetko, born in Celopek, Macedonia and Valentina Saharov born in Kacarevo, Pancevo, Vojvodina province, Serbia, then Yugoslavia. They married in Vojvodina.
Bobby Despotovski was born in Perth in 1971 but went back to Pancevo as a baby, which despite being in Serbia has a very large Macedonian minority who moved there after World War II.
So the question is how did a guy born in Australia to a Macedonian father, a mother of Russian or Ukrainian ancestry, without a drop of Serbian blood and who moved to a part of Serbia, Vojvodina, which is ethnically mixed with a very large Hungarian population, ethnic Russians, Romanians, as well as Serbs end up embracing a Serb nationalist identity?
Bobby Despotovski (convert to ultra-Serb nationalism)...
An Aussie footballer, Perth Glory's Despotovski enraged fans of Melbourne Knights - formerly Melbourne Croatia - in 2001 by mimicking the three-finger salute Serb soldiers gave after brutalising Croats during the Yugoslav civil war. Despotovski was attacked as he ran for the team bus.
'At the end of the day it was politics,' he said. 'Serbs against Croats.'
Yes, but Bobby you're not Serb ! - see link

Perhaps, Naum Panovski should be asking why someone in "diverse" and "cosmopolitan" Vojvodina acted in such a manner rather than venting his spleen on the American-Macedonian diaspora and by extension Australia? 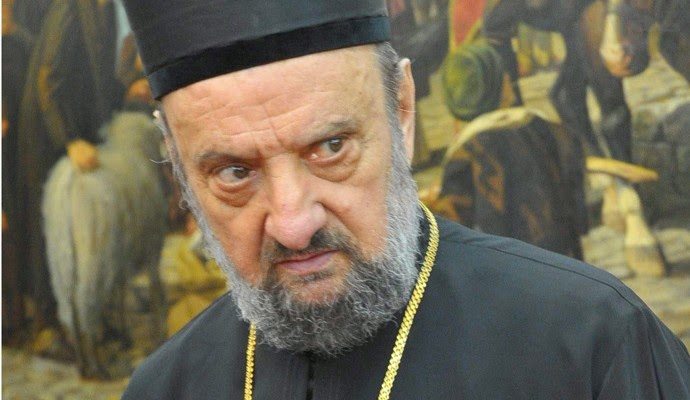 PANOVSKI'S ILLUSION - shattered by the ugly reality of Kacavenda.
Belgrade Cafe intellectuals such as Naum Panovski reveal their naivety or their own bias in defending a system, Tito's Yugoslavia, which had to use secret police informers such as pedophile priest Vasilije Kacavenda as well as criminals, bank robbers and gangsters such as Arkan as hitmen in the 1970s.

It tells you of a polticial system that was morally bankrupt and based on an illusion, funded in part with Western cash because of the Cold War.
This is the "utopia" that Panovski longs for and when the so called "Utopia" collapsed, he moved to the West...to greener pastures but now re-packages himself as a kind of "dissident" or "anti-nationalist" but ironically ends up as a "Yugoslav nationalist."
A lot of these guys and gals do...because it's their "identity" which they have chosen but no one else is permitted to determine their own identity. It has to be determined for them by the likes of Panovski, which is the behaviour of the authoritarian, the dictator.
But they can't see that, only the faults of others. But their own illusions or intellectual quicksand have now been revealed.
It's also disingenous and intellectually lazy to equate "Macedonian assertiveness" on par with say Serb ultra-nationalism of Slobodan Milosevic. No doubt he doesn't want to feel excluded from the Belgrade cafe intellectual millieu. If people want to identify as Macedonians that is their right to do so.
Funny there is no mention of Panovski in any Amnesty International documents in the 1980s, unless I've missed something. 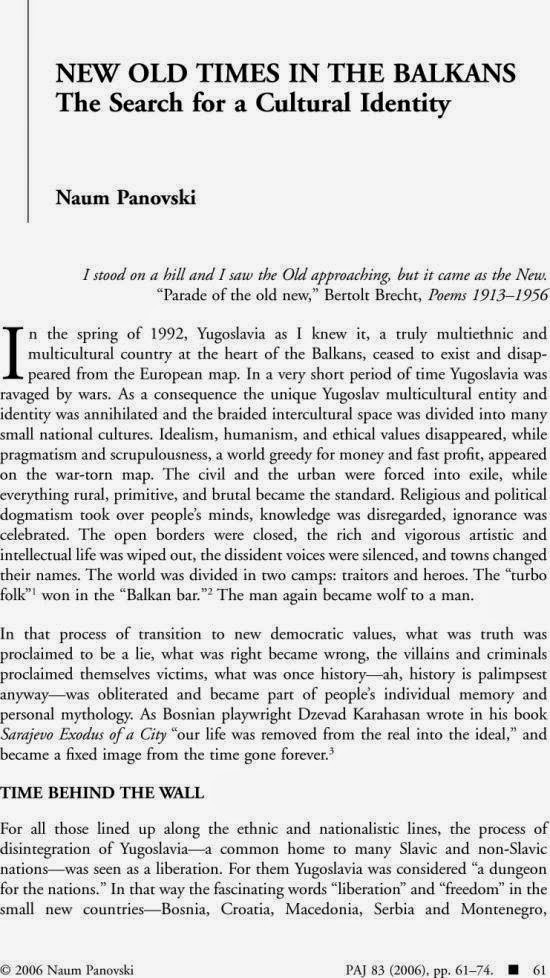 
It's a pose that these guys and gals from the Balkans strike in order to impress their Western counterparts... but when you examine their intellectual foundations it's kind of mush that doesn't hold upto any kind of scrutiny....people claiming to be "anti-nationalist" but in their doing so they end up being "nationalist" and longing for a system that was morally bankrupt. 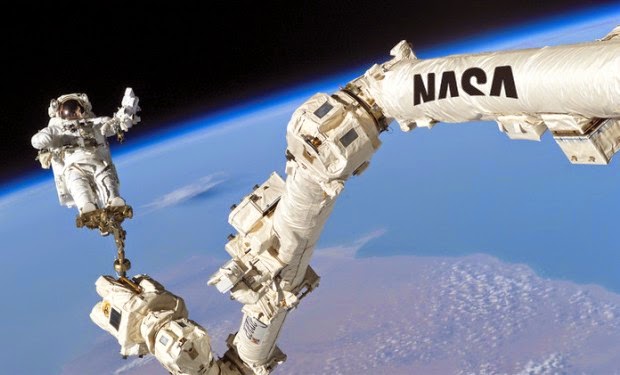 WHO IS THE "PRIMITIVE?"
George "Gjorgija" Atanasoski - American Macedonian businessman and an influential member of the diaspora. George's company sells components to NASA.
Naum Panovski or that matter a Member of the City of Skopje elite: Degree from Belgrade University.
Has the 'Elite' invented anything or involved in hi-tech? No. Despite their 'Belgrade cafe cool' have they invented say a mobile phone? No. A more efficient coffee machine so they can sit in the cafe and enjoy a hot brew? No. Ahaa..!
But somehow, according to Panovski, the diaspora is primitive...Panovski's assertions are those of a man suffering from an inferiority complex who needs to bellitle others to make himself feel superior.

BELGRADE IS HIS HOUSE? Naum Panovski told a Serbian newspaper that Belgrade is his "house," meaning his intellectual Jerusalem, even though he was born in Macedonia but now lives in the United States. link

In keeping with some of Macedonia's intellectuals who have been conditioned to confuse Serbian cultural hegemony, or more precisely Belgrade urban culture, with "internationalism." In indulging in this odd form of Internationalism, their attacks on Macedonian identity smacks of Serbian chauvinism.
We are repeatedly told that Macedonian assertiveness equates to extremism, even though in 2,000 years Macedonia has never invaded anyone; did not send in the tanks to crush Slovenia's independence in June 1991.
You're more likely to commit an act of political terrorism, violence, vandalism or start a war in Macedonia due to Serbian nationalism and Albanian separatism than you are if you're a Macedonian from New Jersey. 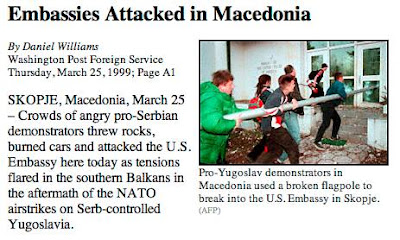 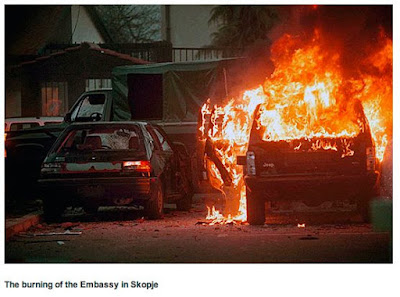 Kosovo Liberation Army (KLA) fighter. The extremist Albanian "army" which moved into Macedonia in 2001, trying to take a third of its territory in establishing a Greater Albania. 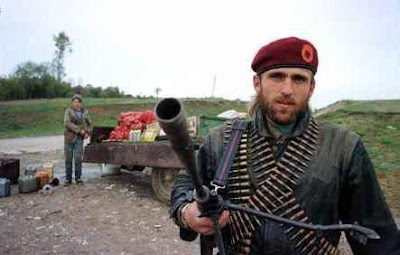 Posted by TEAM UZUNOV at 1:59 PM No comments: