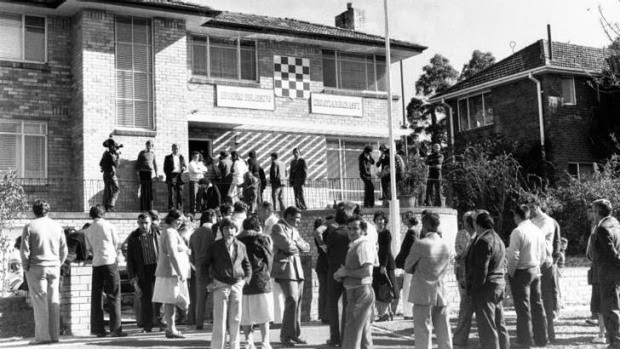 A leading member of the Australian Serbian community said yesterday he was convinced that Croatians in Australia were being given a bad name to appease the Yugoslav Government over genuine opposition to the Belgrade - regime.

The Serbian leader, who at first agreed to the use of his name, said later he had been advised he could be victimised if it were published.

A statue of the Yugoslav World War II Chetnik leader. General Mihailovic  outside the Serbian Church in Forrest was guarded during the visit this week of the Yugoslav Prime Minister. Mr Bijedic, because of fears that it might be attacked.

The statue was bombed about two years ago. The Yugoslav Embassy has complained of its presence in Canberra.

'"It was guarded because we feared that Yugoslav communist agents in Australia might bomb it and use this as an excuse to attack the Croats", the Serbian leader said.

"I fought with Mihailovic during the war against the Germans and the Italians who occupied our country and against their allies.

"I believe that incidents have been deliberately staged by the Yugoslav secret service in Australia in order to bring suspicion against the Croats.

"I have no time at all for Croat extremists but I believe that the Yugoslav communists have arranged many of the incidents for which they have been blamed.

"Once they have convinced the Australian Government to wipe out the Croat opposition to them they will start on the Serbs, the vast majority of whom also oppose Tito and his methods".

The Serbian said it appeared that many of the bombing incidents being blamed on Croats were the work of other parties. Large numbers of Croats working in construction and allied industries knew how to use explosives to get their full effect.

One particular explosion in Melbourne which had received great publicity he believed to have been "staged". The explosion had blown outward from its reputed target. Any skilled Croatian explosives expert would have known how to direct it inward, so as to destroy the property. 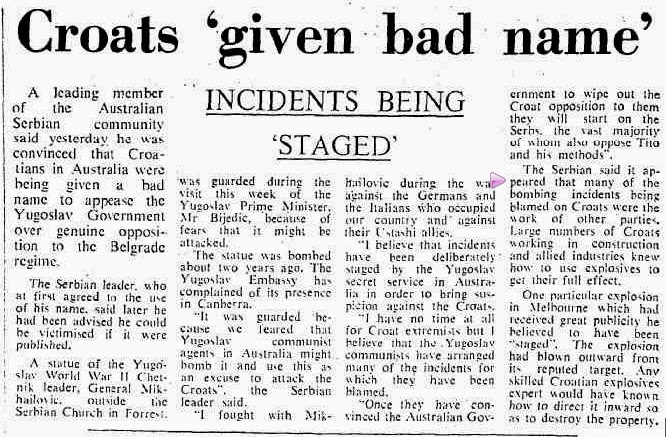 Posted by TEAM UZUNOV at 5:25 PM No comments: Links to this post