COMMANDOS SET UP BY TALIBAN 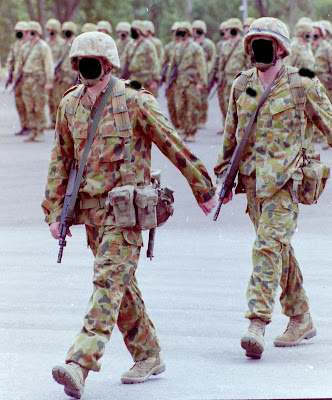 On the left is the Australian Army Major in charge of the Commando raid in February 2009 in Afghanistan. This photo was taken in 2001. Copyright Sasha Uzunov.

COMMANDOS RETURN MEDIA FIRE: “We were set up by Taliban”
By Sasha Uzunov

Sources close to The Australian Army’s elite reservist unit, 1 Commando Regiment have told TEAM UZUNOV that members from that unit on a patrol in Afghanistan last February were fired upon by the Taliban and in the ensuing battle five local children were killed by grenades thrown by the Australians.

“These guys were set up by the Taliban,” one of the sources said. “When they encountered enemy fire during a room clearance inside a home they reacted to their training. The Taliban used the locals as civilian shields.”

Serving Australian Defence Forces personnel are not permitted to comment to the media unless given permission by the Defence Department. Sources close to 1 Commando Regiment have revealed to TEAM UZUNOV the name of the overall mission commander responsible for the raid and other participants.

The commander holds the rank of Major and is an experienced and well respected Regular Army Special Forces operator. His name, for security reasons, cannot be revealed. TEAM UZUNOV during his service as a soldier met the Major, and can say that he was regarded as popular amongst the ordinary rank and file.

One of the patrol members is a Commando Reservist and a New South Wales Policeman in civilian life, who according to one of the sources is highly experienced with previous service in East Timor.

“What happened was unfortunate,” one of the sources said. “But our guys were simply tricked by the Taliban. I can’t understand why they’re being made a scapegoat. This nonsense of rivalry between Regular Army and Chockos (Reservist) is simply bullshit. The raid had people from both sides involved.”

SBS TV’s Dateline program reporter Sophie McNeill and Fairfax newspaper journalists Tom Hyland and Jonathan Pearlman have been following the story. Accusations have been made that the Defence Department has been involved in a cover up over the raid.

The host of the ABC TV’s Media Watch program--journalism watchdog—Jonathan Holmes has complained about a lack of media access in Afghanistan. (Media Access and Afghanistan, Episode 11, 19 April 2010, http://www.abc.net.au/mediawatch/transcripts/s2876988.htm).

Media Watch, after a tip off from an Afghani-Australian which could not be ignored, discovered Dateline had confused the identity of an Afghan man, Zahir Khan, with someone else over an interview concerning a botched raid by Australian Commandos which resulted in the death of 5 children in February 2009. Dateline sat on the mistake for a year. www.abc.net.au/mediawatch/transcripts/s2853029.htm

TEAM UZUNOV supports the fierce scrutiny of Australia’s Defence Forces but also believes there needs to be consistency when scrutiny is applied. The media should also fall under that spotlight.

McNeill in 2008 asked not to be contacted to discuss defence issues, including Afghanistan; Hyland is against non-Fairfax journalists scrutinising defence experts.

Peter Charley, the then Executive Producer of the ABC TV program Lateline and now with SBS’s Dateline, issued this warning over scrutiny on defence reporting: “It is neither wise nor clever to suggest that "little ol' Lateline” is "afraid" to have anyone on the program…” (Friday 13 January 2006, email).”

In an extraordinary outburst, Holmes does not believe that big name war reporter Paul McGeough should be asked tough questions, despite the fact he makes his living doing so of others:

“Paul McGeough, who you so snidely deride, has probably spent more time in the “Afghan war zone” – and in Iraq, for that matter – than any other Australian journalist – including you. The fact that he doesn’t have a military background is to my mind entirely irrelevant.”
http://teamuzunovmedia.blogspot.com/2009/10/abc-media-watch-responds.html

Scrutinising the media's scrutiny of defenceBy Sasha Uzunov - Tuesday, 30 March 2010
Posted by TEAM UZUNOV at 11:25 AM No comments:

TIMOR TOUR OF DUTY...now on DVD 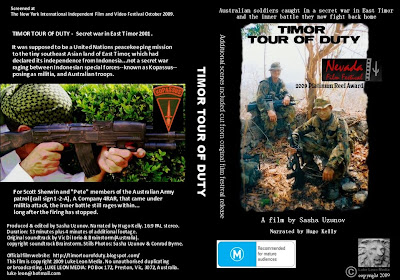 Timor Tour Of Duty, which looks at the Indonesian military's secret war against Australian and New Zealand troops and international peacekeepers in East Timor, received a special commendation Platinum Reel Award from the 2009 Nevada Film Festival.

The film made its US and international screen debut at the New York International Independent Film and Video Festival in October 2009.