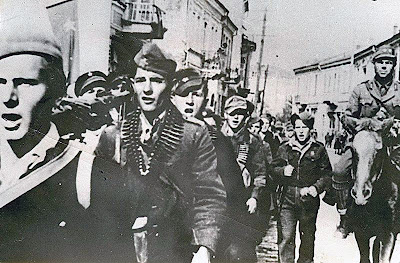 Unsung heroes: Macedonian Partizans who fought Nazi Germany, Fascist Italy and Bulgaria (1941-45) enter the southern Macedonian town of Bitola, after liberating it from the Germans during fierce battles in November 1944. 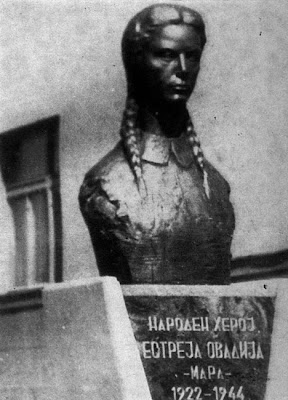 
On Remembrance Day - 11 November– Lest We Forget
BULGARIA'S HOLOCAUST DENIAL
by Sasha Uzunov
In a shameful episode, the European Union's newest member Bulgaria has kicked up a stink about an upcoming Macedonian film which deals with Bulgaria's extermination of Macedonian Jews during World War II.
Bulgarian Members of the European Parliament, who seemed to have forgotten their country's well documented Nazi collaboration, have in effect resorted to blackmailing the EU's Enlargement Commissioner Stefan Fule in putting pressure on The Republic of Macedonia, which has applied for EU membership.
The film, “The third half time,” is a Macedonian production with international funding about a soccer match in 1942 between two teams in the Bulgarian soccer league, Levski and Makedonia. Makedonia is made up of ethnic Macedonians living under Bulgarian wartime occupation and coached by a Jew, who in the film, is being targeted for death by Bulgarian fascists.
see links: www.euractiv.com/enlargement/macedonian-film-infuriates-bulgaria-news-508639
Macedonian film infuriates Bulgaria
http://macedoniaonline.eu/content/view/18997/45/
'Third Halftime' filming kicks off
In 1941 Bulgaria under Tsar (Emperor) Boris became an ally of Nazi Germany and his armies invaded Macedonia, which had been under Serbian and Greek occupation. Ethnic Macedonians looked upon the Bulgarian Army as occupiers. On 11 October 1941 a Macedonian Partizan resistance uprising took place in the town of Prilep.
As Bulgarian occupation became more brutal, more and more young Macedonians joined the resistance and took to the mountains and engaged in guerilla, hit and run, ambush style warfare. Macedonian Jews fared worst. In 1943, over 7,000 Jews were rounded up by the Bulgarian security forces and sent to Nazi death camps. Ninety-eight percent of Macedonia's Jewish population was wiped out, even though Bulgaria managed to save its own Jews.
For decades Bulgaria had been boasting of its humanitarian record during World War II over its treatment of Jews. But the genocide in Macedonia has put a huge stain on that record.
In September 1944, with Nazi Germany losing the war, a communist coup led to Bulgaria, conveniently, changing sides and joining the Allies.
Macedonia later became a constituent republic within Marshal Tito's Federal Communist Yugoslavia in 1945 until 1991, when it became an independent state during the break up of Yugoslavia. Bulgaria, ironically enough, recognised the new state but not the ethnicity or language of Macedonians. Bulgarian nationalists, both on the left and right, deny the existence of a separate Macedonian identity, as does Greece, as do some Serbian nationalists.
Macedonians maintain they are a separate people, and who during World War II began a resistance movement against Bulgarian, Italian and Nazi German occupation of their homeland.
By the end of the war, over 80,000 Macedonians, including a small group of surviving Jews, were in the People's Liberation Army of Macedonia (NOV na M), which later was forcibly merged with Tito's Yugoslav Liberation Army (NOVJ).
Ethnic Macedonians in Greece established an anti-Nazi resistance movment known as NOF, which Greek writers refer to as SNOF (Slavo-Macedonian National Liberation Front). NOF linked up with NOV na M in operations against the Germans.
The Macedonian Partizans in an uneasy alliance consisted of communist and non-communists. One of the leaders of the resistance was Metodija Andonov-Cento, a non-communist who later was imprisoned on trumped up charges by Marshal Tito in 1946.
Estreja Ovadja-Mara, a young Macedonian Jewish Partizan was proclaimed a national hero and has a statue in her honour in her home town of Bitola (Monastir).
According to the Yad Vashem website:
www1.yadvashem.org/yv/en/exhibitions/communities/monastir/partisans.asp
"In March 1943, on the eve of the deportation of the Jews from the town, Ovadja and some of her friends went underground, and a short while later joined the ‘Goce Delchev’ partisan unit, where she became the company's political commissar. Despite her non-combat role, she joined her unit for the majority of their battles, claiming her right to fight.
“With the establishment of the Seventh Macedonian Brigade, Ovadja was appointed regiment political commissar. In the early hours of the 26 August 1944, she was killed in a battle near the Greek border while attacking, as head of her unit, the last German fortresses in the Kaymakchalan Mountains.”

Considering Macedonia's tiny population, over 25,000 soldiers from the NOV na M were sent to assist the NOVJ at the Syrmian Front (Sremski Front) in North-Eastern Serbia in early 1945, one of the last major battles in the Balkans as the German Army were order to fight to the bitter end. This was to allow the retreat from the Eastern Front by other German forces back to Greater Germany and stop the Soviet Union entering German territory.