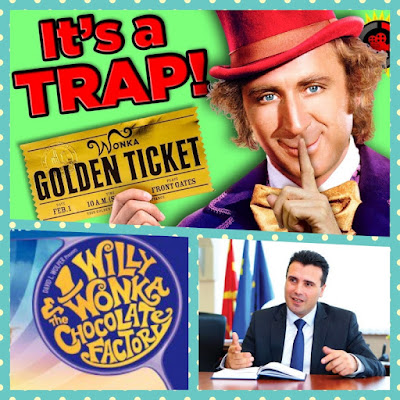 Zoran Zaev, Clown-Prince of Telecommunications, Can’t Live Down Russian Pranking Episode
By Sasha Uzunov
Not a week has passed since Macedonia PM Zoran Zaev became the latest victim of two nefarious Russian phone pranksters, and the farce is only compounding on itself- making Zaev, and by extension ‘North’ Macedonia the laughingstock of the diplomatic world. The government is stumbling to contain the damage as Zaev continues to contradict himself while being forced to apologise to leaders around the region he had gossiped about over the ‘hot’ line. 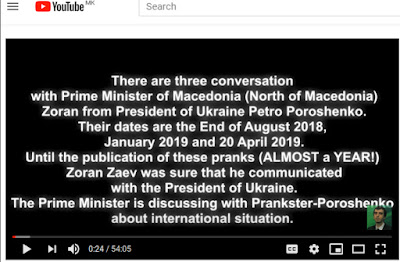 The conversations, which were posted on Youtube, start out with an explanatory text in English and Russian. The rest of the video consists entirely of Zaev speaking in English with subtitles in Russian.

The audio comprises almost an hour of cringe-inducing admissions of Zaev’s personal opinions on burning international issues, plus a faint whiff of Zaev considering corrupt practices- not to mention him giving out the private phone numbers of US diplomat A. Wess Mitchell.
Quite predictably, the opposition VMRO-DPMNE has enjoyed having a go at Zaev all week as more details emerge of the premier was willingly duped into thinking he was talking with NATO head honcho and former Ukrainian president Petro Poroshenko by infamous impersonators ‘Leksus’ and Vovan,’ who have also pranked the likes of Macron, Boris Johnson and others.
A WESTERN PUPPET, PAR EXCELLENCE
The phrase ‘Western puppet’ is arguably overused, but the case of Zoran Zaev’s conversations with the faux Poroshenko and Stoltenberg reveal that Zaev has passed his course in this regard with flying colours. When he was just an opposition figurehead cursing the Gruevski government, the man could barely put a coherent sentence together. But just listen to him now!
After some special training under the tutelage of ex-US Embassy hand David Stephenson and especially the former gunslinging American ambassador, Jess ‘Wild West’ Baily, Zaev seems to sound like a credible diplomat. As the tapes reveal, Zaev’s actually heard of Abkhazia – and might even be able to find it on the map – and can also express concern over complicated international issues, like relations between Serbia and Kosovo, Turkey, Greece and Cyprus, and of course, the ‘Russian threat’ lurking around every corner.
Ironically, it’s this unusual mastery of detail that’s gotten Zaev into hot water all week. After blaming ‘foreign networks hostile to NATO’ as being behind the pranking in his Monday press conference, and accusing former President Ivanov of being Pro-Russian, Zaev suddenly made an about-face in the most ironic of places: a new Lukoil patrol station. He appeared together with Russian ambassador Sergey Bazdnikin and tried to distance himself from his antI-Russian rhetoric. As Sloboden Pecat reported, Zaev reassured the public that the pranksters did not represent the Russian Federation, but were merely acting on their own. The Russian Ambassador took mercy on Zaev and agreed that bilateral relationship will continue normally. link here 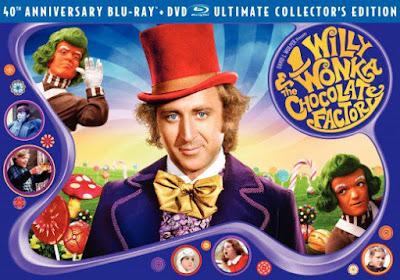 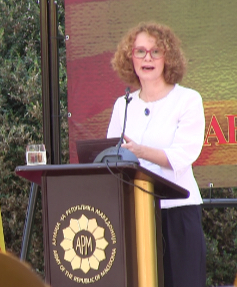 Radmila Sekerinska-the ruthless career politician who prefers to wield power behind the scenes in SDSM while being the West’s most trusted local puppet will surely see her stock rise as a result of Zaev’s idiocy. Who knows? In the SDSM’s current race to the bottom, she might even become prime minister by appointment, since she is too polarising to ever win at the ballot box.
Kyriakos Mitsitakis-Greece’s new prime minister, whose New Democracy was elected to replace Zaev’s pal Alexis Tsipras and his left-wing Syriza government just a day before Macedonians were shocked by the Zaev conversations, has got to be loving Zaev’s own-goal, as it paints Zaev and Tsipras in a conspiratorial light negative for Greek interests.
Anyone else vying for the Nobel Peace Prize-Indeed, while the aforementioned Greek and Macedonian leaders have been nominated for the Nobel Peace Prize for ending the name issue dispute with the Prespa Agreement, the Nordic nominating committee will have to be thinking twice about Zaev’s fitness for the prize.
---------------- 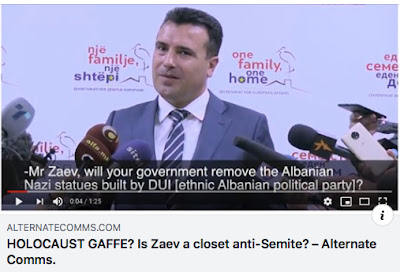 
CROOKS AND RACISTS?
To add to the craziness of Macedonia PM Zaev being caught by Russian prank calls was his own earlier Holocaust gaffe, without provocation from outside forces.
To top that off, Zaev's SDSM Party General Secretary Dragi Rashkovski recent racist attack on Roma (Gypsies) and Italians now throws new light on Zaev's Holocaust gaffe. Does Zaev hate Jews?
Rashkovski was allegedly caught trying to shakedown a foreign company for a kickback in doing "business" with the Macedonian government. He was recorded as making racist comments - see link here

If the allegations of corruption are true, then the Zaev government is a seething hotbed of crooks, racists, haters, greedy malcontents supported by the West.
----------------
YOU CAN FUND TEAM UZUNOV BLOG via this link here
Posted by TEAM UZUNOV at 1:15 PM