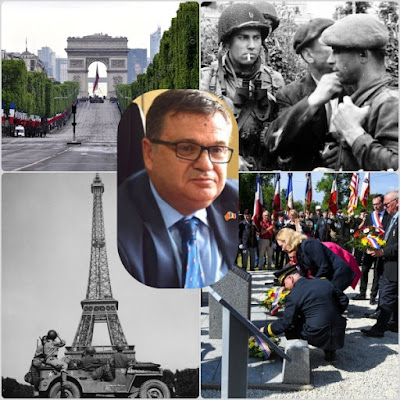 Every year France commemorates the Victory in Europe Day (May 8), the defeat of Nazi Germany, and the D-Day landings at Normandy, June 6, but the country’s Ambassador to Macedonia, Monsieur Christian Thimonier has declined to condemn let alone comment on World War II Albanian Nazi collaborator statues in Macedonia that have been built in recent times by the Albanian political bloc, a key western ally. 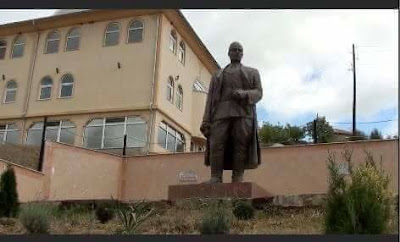 One of the WWII Albanian Nazi statues in Macedonia. The figure is Xhem Hasa, a leader of the quisling militia, the Balli Kombetar. see links here and here

The Ambassador also declined to comment on other issues such as name change of Macedonia - at the behest of Greece - the concerning behaviour of Macedonia’s Defence Minister Radmila Sekerinska, the poor treatment of ethnic Macedonians in Greece and Bulgaria, bilingualism - elevating Albanian into the second official language of Macedonia, and security issues. The questions are published below in full:

The questions were put to the Mr Thimonier over 6 weeks ago and a response was delivered on April 25, from a media spokesman, Mr Vlado Ralpovski:

"We would like to inform you that we have taken due note of your questions, however we cannot answer them for now. We will get back to you at a more appropriate time. Thank you for your understanding.” 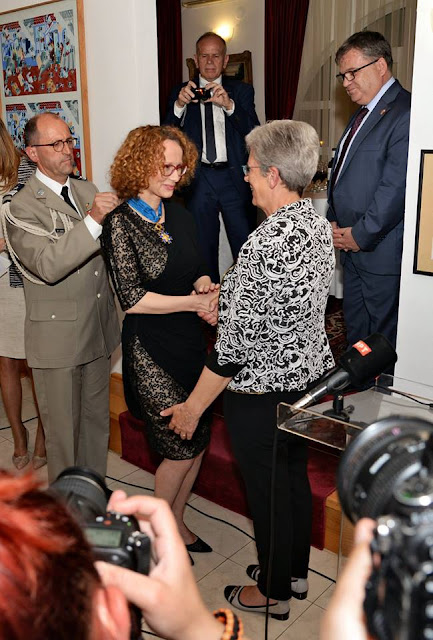 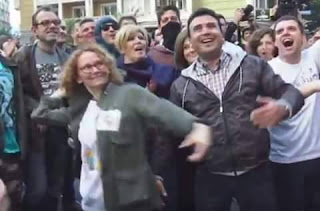 In 2016 Sekerinska was pictured throwing a paintball at a Macedonian statue during the Colour Revolution. - see link here about the Colour Revolution and Canvas. She supports changing Macedonia’s name and identity in order to unfreeze Greek blocking of Macedonia’s application to join NATO and the European Union. However, she has never protested against Serbian nationalism outside the Serb Embassy in Macedonia, including the infamous 1999 attack on the US Embassy in downtown Skopje, the Macedonian capital, by extremists linked to the then Milosevic regime of Serbia. This inconsistent behaviour has angered ethnic Macedonians, who say they are being deliberately targeted under the pretext of “anti nationalism” to satisfy Greek interests. 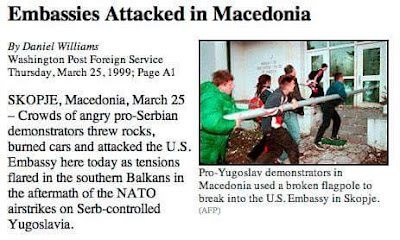 This has raised concerns amongst Macedonians of deliberate chauvinism, favouritism by the above named individuals who are alleged to be hiding their true motives behind “anti nationalism.”

Mr Jovanovski stubbornly and angrily refuses to protest outside the Serb embassy in Skopje, Macedonia.

Mr Bogoevski, has admitted, that he too, doesn’t protest against Serb nationalism.

Mr Bogdanovic has invoked Serb nationalist icon Gavrilo Princip and has began to demolish Macedonian monuments in Skopje, the capital.

Question 1: Ambassador, will you monitor closely events in Macedonia and give an assurance to native ethnic Macedonians in the Republic of Macedonia that they will be given equal treatment?

Question 2: Are you concerned with the rise of neo Albanian fascism and extremism in Macedonia? Albanian politicians have over the past decade or so built a number of controversial statues to Albanian World War II Nazi collaborators in Macedonia. The issue has been brought to the attention of the German Deputy Ambassador to Macedonia, Mr Marco Acquatacci, who has given a statement. However, the US remains silent on the issue.

Question 3: Is it fair for Greece and Bulgaria to blackmail Macedonia to give up its identity as a "trade off" to join the European Union? Is it too big a price?

Question 4: The EU has largely not pressured Greece or Bulgaria to give basic human rights to ethnic Macedonians in those EU member states but has pressured Macedonia over ethnic Albanian rights which in reality surpass local Balkan and international standards. What are your thoughts on this blatant contradiction?

Question 5: In 2008 the US Embassy in Macedonia warned about introducing formal bi-lingualism in the country implying it would lead to the disintegration of Macedonia. France has a large Arab minority but French still remains the sole official language of France. What are your thoughts on the issue of bilingualism in Macedonia?

Question 6: does France assist the Macedonian police and military with any kind of training? For example counter-terrorism?