A man who claims he was an Australian soldier on the East Timor-Indonesia border and viewed through binoculars but was powerless to stop the brutal murder of 3 United Nations aid workers in Atambua in 2000 has had an application for a disability pension rejected by Australia’s Department of Veterans Affairs DVA).

The man, who wishes to remain anonymous for fear of retribution, is being represented by Mr Brian O'Neill, advocate and pension officer with the Returned Services League, Australia’s veteran peak body.

Mr O’Neill contacted Sasha Uzunov, the Director/Producer of documentary film Timor Tour of Duty, to tell of the man’s plight.

“He witnessed through his binoculars from the border, the mutilation and killing of the three UN workers on 6 September 2000 near Atambua in Indonesian West Timor,” Mr O’Neill said.

In the official 6RAR tour of East Timor journal (2000) on page 34, the Officer Commanding of Bravo Company, 6RAR, Major John McCaffery wrote:"...after the events of the 6th of September 00 in Atambua and the frustration and anger at the inability to affect the situation as it unfolded..."

The man was an experienced soldier with Bravo Company, 6RAR, the Brisbane based infantry battalion. As a member of a patrol he was following up a blood trail left behind by militia and a day later on 6 September 2000 ended up at Patrol Base Sparrow, southwest of Balibo. PB Barrow is close to the Indonesian border and about 12 km from Atambua township and used as an observation post by Australian soldiers.

“It was here that he saw smoke billowing from the area near Atambua and went up a hill to get a better sight. It was here that he saw through binoculars many of the Militia moving around the UN building with machetes. He observed the armed men entering and leaving the building and observed three people dragged out of the building. They were covered with blood and had been hacked and beaten to death,” Mr O’Neill said.

“He was very frustrated with what he called the stupidity of the Rules of Engagement and that they could not do anything about it. He briefed his chain of command by radio."

Under the Rules of Engagement, Australian soldiers were forbidden to encroach upon or fire into Indonesian territory regardless of the situation. Indonesian Special Forces, known as Kopassus, and militia groups regularly crossed the border in a secret war against Australian and New Zealand soldiers and international peacekeepers as payback for East Timor’s independence from Indonesia.

The man’s claim for psychological trauma was rejected by DVA on the grounds that it was physically impossible for the killings to have been viewed through army binoculars, which might have a standard magnification of x6 or x10 or x20, from 10 or so kilometres away. DVA, for reasons unknown, never called the Bravo Company Commander, Major McCaffery, to give evidence but relied upon a report compiled by Writeway, a private research company.

However, 6RAR's then Commanding Officer, Lieutenant Colonel Mick Moon revealed to Writeway: "On a good (and very clear) day you can just see Atambua in the distance from a Patrol Base called Sparrow."

The Writeway report concluded: "It is most likely that the veteran...was at...Sparrow where the veteran may have been able to see Atambua from a distance and see the smoke from fires in the UN compound. He would not have been able to make out individual figures. This could hardly be classified as 'witnessing the killings.' "

"I don’t know all the facts to this story,” Uzunov said. “I’m hoping people with information will come forward to help this man confirm his story. Anyone who can help should contact Mr O’Neill.”

Legendary infantry Battalion 6RAR took part in the famous Battle of Long Tan in 1966 during the Vietnam War, which pitted over a hundred Australian soldiers against 2,000 or more Vietnamese Communist troops. In the last 20 years 6RAR had been reduced because of massive defence budget cuts. In 1999 the unit was strengthened with army reservist.

The militia believed that 6RAR would be an easy target when it arrived in East Timor in early 2000. However, in 1998 the far-sightedness of Lieutenant General Frank Hickling, the Chief of Australia's Army, ensured that all troops, both regular and reserve, were combat ready and kept causalities to a minimum.

Nevertheless, 6RAR came under ferocious militia attack. In one infamous case, on 2 August 2000, 1 Platoon Alpha Company was engaged in a shootout and with two militiamen being killed.

"The bodies of the two dead Militia told a big story. Clothed completely with TNI [Indonesian Army] issue DPM uniforms and wearing basic webbing, the KIA [killed in action] Militia were clean- and shorthaired. Underneath their DPM they wore civilian clothes. They carried plenty of ammunition and grenades and had local fruit in their pockets. Weird talismans of silver coins and weird stringy bits of dark frayed organic material were worn in little crocheted bags around their necks along with quantities of a red pharmaceutical drug in thin clear sealed sachets. While not clinically tested it was suspected that the liquid was Ba – a new super speed which is sweeping Asia - which would go a long way in explaining KIA Two’s 200 metre final. "

A former US Army officer and a southeast Asia specialist has confirmed that one of the militia killed was an Indonesian Army intelligence officer who was "on leave and freelancing for the militia."

"I've seen the photos of the dead man in uniform," he said. "What I find surprising is that this was an incredible intelligence find for the Aussies but none of the squad leaders (corporals) in the patrol received any medals or recognition. If they had been Americans they would have been awarded Silver Star medals for gallantry."

The film made its international debut in New York in late October 2009 and was the subject of controversy on Indonesian websites and blogs with one pundit claiming that it "re-opened old wounds" between Indonesia and Australia over East Timor."

"There is a prevailing view that Australia's military intervention in East Timor ten years ago was an untroubled affair - it was a successful operation without casualties. The reality, however, was that while casualties were limited, there were many tense moments, and exchanges of fire with Indonesian Special Forces, along the challenging and at times confronting border areas patrolled by Australian soldiers.

"Sasha Uzunov's documentary 'Timor Tour of Duty” graphically captures some of these exchanges and the very real impact that it had on the lives of the soldiers involved. 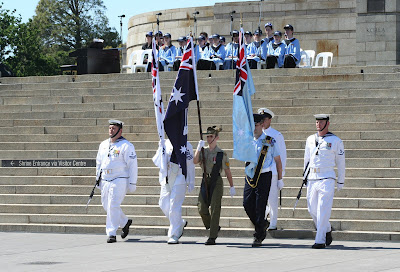 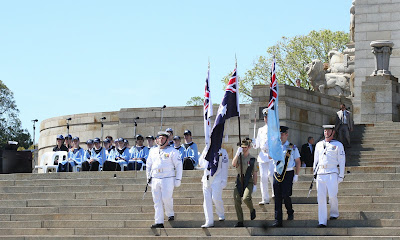 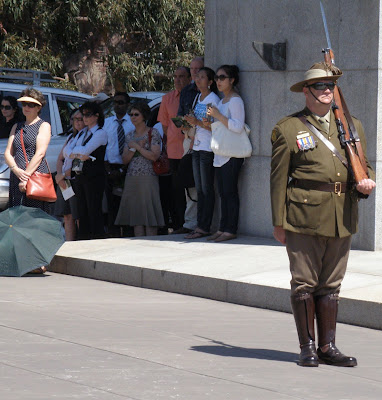 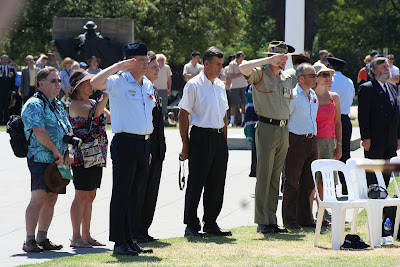 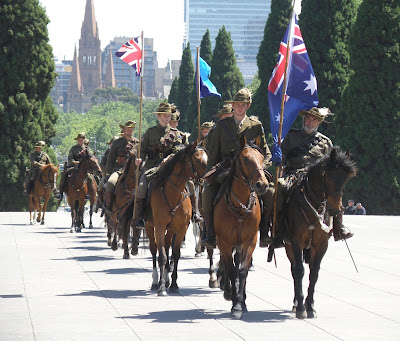 A re-enactment of the legendary Australian Light Horse of World War One fame. 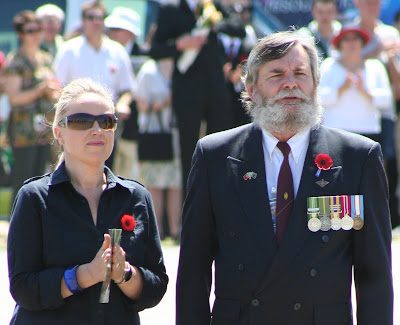 An East Timor veteran from the UNTAET mission reflects on this sombre occasion. 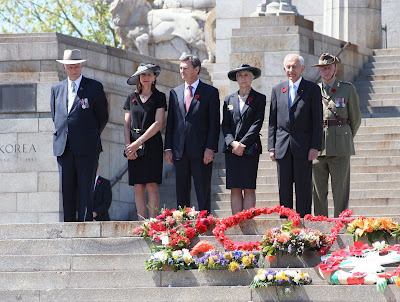 The official party. Victorian State Premier John Brumby and his wife Ms Rosemary McKenzie together with the Governor of Victoria and his wife. 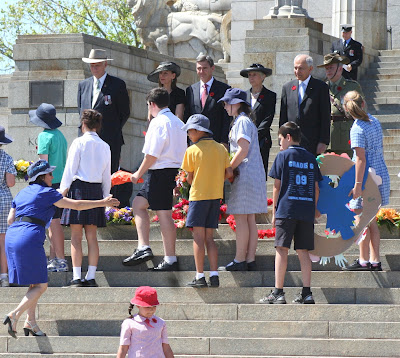 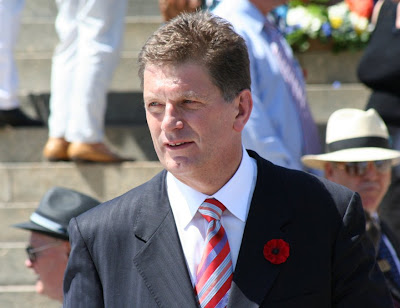 The Leader of the Victorian State Opposition Ted Ballieu. 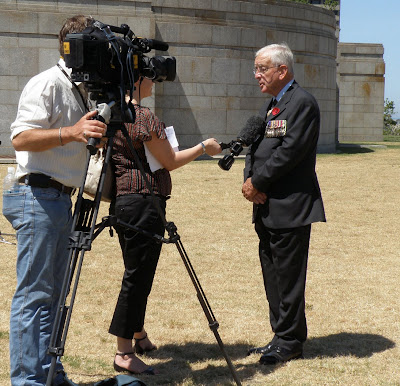 YOU WILL NEVER WALK ALONE

After the ceremony is over...

On this bright and very hot sunny day, an elderly gentleman on a walking sticking nursing a foot injury makes the climb up the Shrine steps on a personal pilgrimage. 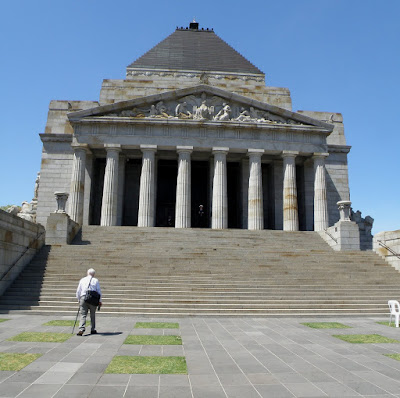 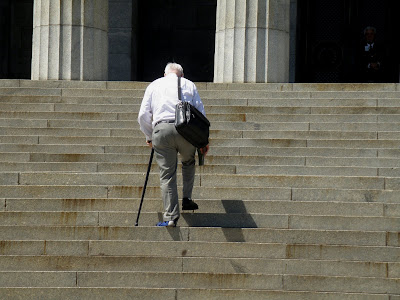 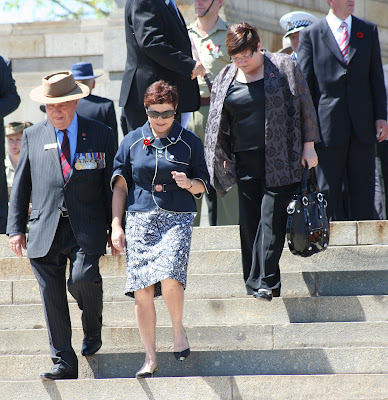 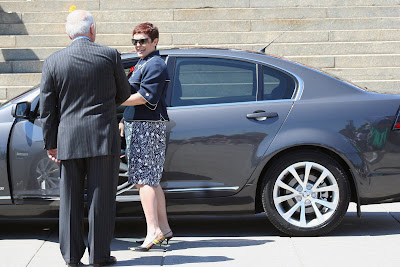 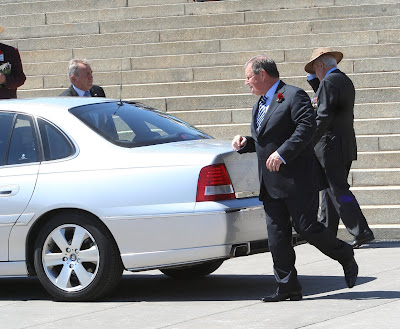 The Lord Mayor Robert Doyle also makes a dash for his limousine. Melbourne Town Hall is a 15 minute walk from the Shrine. 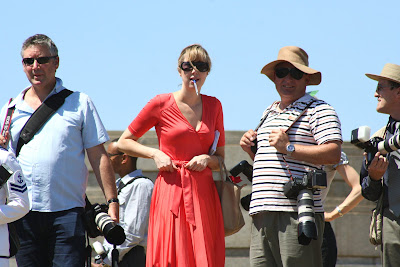 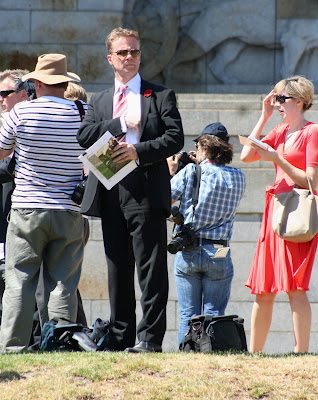 Posted by TEAM UZUNOV at 3:09 PM No comments: Links to this post