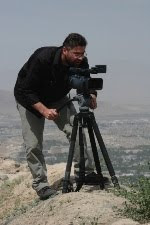 Why is Australia's top war reporter John Martinkus not being used to cover the war in Afghanistan?

No doubt many who have been watching the 2010 Soccer World Cup from South Africa have been puzzled by some of the tactics used by a number of coaches, namely Australian boss Pim Verbeek. Equally puzzling is one Australian media boss’s stubborn refusal to change his tired game plan. 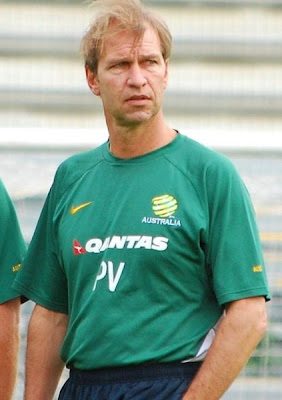 Verbeek came up with a strange plan to counter the powerful Germans in Australia’s opening World Cup match , which resulted in a 4-0 drubbing. He kept his powerful strikers on the bench and used superstar Tim Cahill out of position. By the time Australia was allowed to play its natural game against Ghana and Serbia it was too late, Australia was out of the World Cup and rueing what could have been. 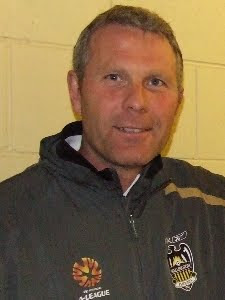 In contrast, New Zealand national soccer coach Ricky Herbert (pictured above) had his players fighting like unchained wild lions against Slovakia, Italy and Paraguay and remained undefeated. The irony is that Shaun Brown, the head of SBS TV, is a Kiwi. We can only hope he draws strength and inspiration from his fellow countryman Herbert and encourages his Aussie subordinate Peter Charley!

“Team Dateline” has become a parody of its former hard-hitting best with Charley not using top “strike” reporter, John Martinkus, in covering the war in Afghanistan but instead opting for a predictable plan. Dateline had a huge gaff in one story when the identity of an Afghan man was confused relating to a botched Australian Army Commando raid last year which resulted in the deaths of civilians. Under previous ‘Team Dateline coach’ Iron Mike Carey, ironically a mate of Charley’s, this would never have happened.

Verbeek used Cahill in the role of lone striker up forward but anyone knows that the player is better suited to playing deep and then attacking from out of the blue. Likewise, Martinkus, one of Australia’s most respected and fearless war reporters who has worked for “Team Dateline” in the past, is not being used to cover the war in Afghanistan. He has taken up an academic job in Tasmania, Australia’s deep south state.

Martinkus’ style is similar to Cahill’s, in that he plays deep and then strikes. In media terms this means that the news story takes precedence, not Martinkus’ face on camera wearing a flak jacket and helmet in a contrived tough guy pose.

Instead, we have Dateline reporter Mark Davis, former lawyer turned war reporter, who carries his own camera into a combat zone but the camera is fixed on himself at all times, except for toilet breaks! This is ripe material for a sit-com. Why no one has satirised Davis and his “style” beats me? It is absolutely hilarious---though unintentional--and it detracts from the story being covered.

Then there is Charley’s obsession with the “media tough guy/gal” play so popular in the 1970s and 80s under American-Australian media guru Gerald Stone, who took a group of Aussie reporters and made them national heroes by sending them into warzones and playing tough for the camera. In reinventingthis game plan, Charley has reporter Sophie McNeill as the 21st century media tough gal. But this has encountered some problems, namely over the Afghan story mentioned above.

“Pick, arguably, the most dangerous region in the world today and that’s where you'll find Sophie McNeill.”

But not according to the Media Watch program on Australia’s other public broadcaster ABC TV, www.abc.net.au/mediawatch/transcripts/s2853029.htm

“Sophie McNeill was in Australia when the story broke, and she stayed there. She couldn't have travelled safely to the remote village in Oruzgan (Afghanistan) where the killings took place.”

SBS TV is based in Sydney, Australia; to be fair to McNeill we can regard some of the suburbs in that city as warzones!

To top that off, we have the Sydney Morning Herald newspaper’s self appointed defence expert the Irish-Australian Paul McGeough turning up on “Team Dateline” in cameo roles, complete with flak jacket and helmet in Afghanistan. It has overtones of media mates chewing the fat on camera.

Martinkus is well known for going where angels fear to tread. He spent years covering the conflict in East Timor; was kidnapped in Iraq and has been to Afghanistan. In other words, the man is a heavy hitter but with a low key and soft spoken stage persona. There are no cheap theatrics for the camera.

Australian taxpayers who pay Charley’s wages at the public broadcaster SBS have a right to know why the best man for the job in reporting what is actually going in Afghanistan is not being used. Charley should be catching a flight down to Tasmania and getting Martinkus back into the team!