1977 JAT Travel Agency bombing in Melbourne may have been a dress rehearsal?
Muslim Bosnian activists being spied upon

WAS BEGOVIC THE MISSING LINK?
by Sasha Uzunov 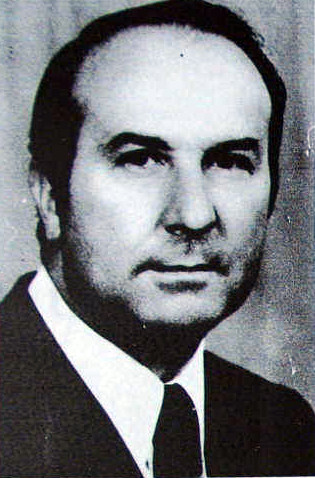 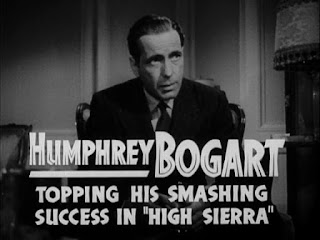 Enver Begovic (aka Jason Enver Ablon aka Frank Abalone), a controversial Melbourne private detective whose incredible life was straight out of a Humphrey Bogart film. For many years he ran the successful Inge Detective Agency. Photo credits. Above: ASIO file. Right: Herald and Weekly Times 1968. 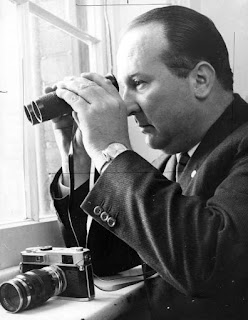 A controversial Melbourne Private Detective may have been the link between a Yugoslav diplomat master spy, and a low level operative involved in the 1979 set up of six Australian Croats on false charges of terrorism.

The larger than life Enver Begovic, who spoke excellent English, arrived in Australia as a refugee in 1957 and within a year was running a successful private investigative agency.

Begovic, according to a file by the Australian Security Intelligence Organisation (ASIO), called himself a Muslim Croat from Bosnia-Herzegovina, then a part of communist Yugoslavia. He died a few years ago.

In the late 1960s he became a powerful figure within the Australian Croatian community: known for throwing his wealth and influence around. At one stage he was President of Melbourne Croatia Soccer Club. But he later changed political allegiances and began referring to himself as a Yugoslav Muslim. ASIO files, which include transcripts of bugged telephone conversations, have Begovic passing on intelligence on dissident Croats and Bosnians to the Yugoslav Consul General in Melbourne, Dr Georgi Trajkovski in 1978-79

The private eye, born in 1924 or 1925, told ASIO officers of his fanciful past: claiming he was  conscripted into the German Secret Police (meaning the dreaded Gestapo or SS) during the Nazi occupation of his homeland during World War II; at the end of the war he claimed he was thrown into a Soviet Prisoner of War (POW) camp before escaping to Austria, where he later met his Austrian wife, Ingeborg. After his release he alleged that both he and his wife had worked for United States intelligence against communist agents.

A check by Australian authorities revealed he had served prison time in Allied occupied Austria and Germany for embezzlement and fraud, involving stealing a large sum of money.

According to a prominent US academic and former Naval Intelligence Officer, Dr John Schindler, Begovic fits the profile of an intelligence operative for the dreaded Communist Yugoslav Secret Police (UDBa), which began a campaign to discredit emigre Croats, Macedonians and other groups through false flag terrorist action. But what is puzzling is how  did a newly arrived migrant such as Begovic learn to speak excellent English before arriving in Australia and where did he pick up the skills and knowledge to run a detective agency? 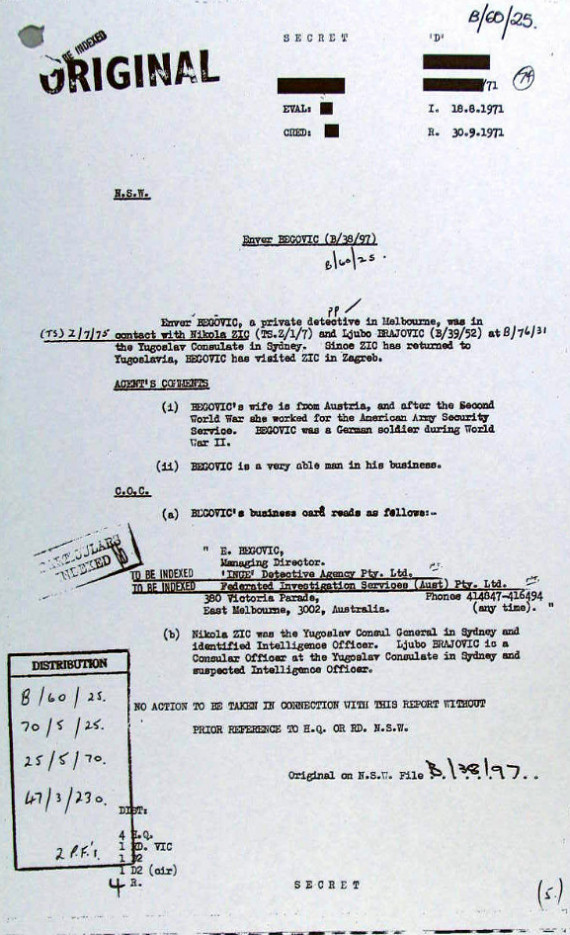 Another infamous UDBa operative during the 1970s was Zeljko Raznjatovic-Arkan, an armed bank robber in Western Europe and freelance assassin who after the collapse of Communist Yugoslavia became a Serbian nationalist warlord. Arkan later fell foul of his patron, Serbian strongman Slobodan Milosevic, and was murdered in a Belgrade hotel in 2000.

Virkez, a Bosnian Serb posing as a Bosnian Croat, born in 1951 arrived in Melbourne, Australia in 1970, married a Croatian woman but later abandoned her and their child and moved to Sydney, eventually settling in NSW country town of Lithgow .

He moved in the same political circles as Begovic, a fellow Bosnian, as well as another Muslim Croat from Bosnia Ragib Avdic, a genuine anti-Yugoslav communist dissident.


According to Trajkovski's ASIO file, in 1978 the Australian government refused Avdic a passport in Sydney. Looking for help, he had naively asked Begovic, as a private eye with connections to powerful people, to pull some strings--all the while Begovic was feeding Trajkovski with intelligence.


THE CROAT 6 SET UP- the Melbourne test run !

There is strong circumstantial evidence to suggest that the Croat 6 set up was orchestrated from Melbourne, and in fact a test run was conducted in 1977-78 with a bombing of a Yugoslav travel agency office in Melbourne. When Yugoslav intelligence could not manipulate the Victoria Police Special Branch into blaming Croat terrorists the focus then moved to New South Wales where the Police Special Branch was more susceptible to accepting the existence of a terrorist conspiracy. 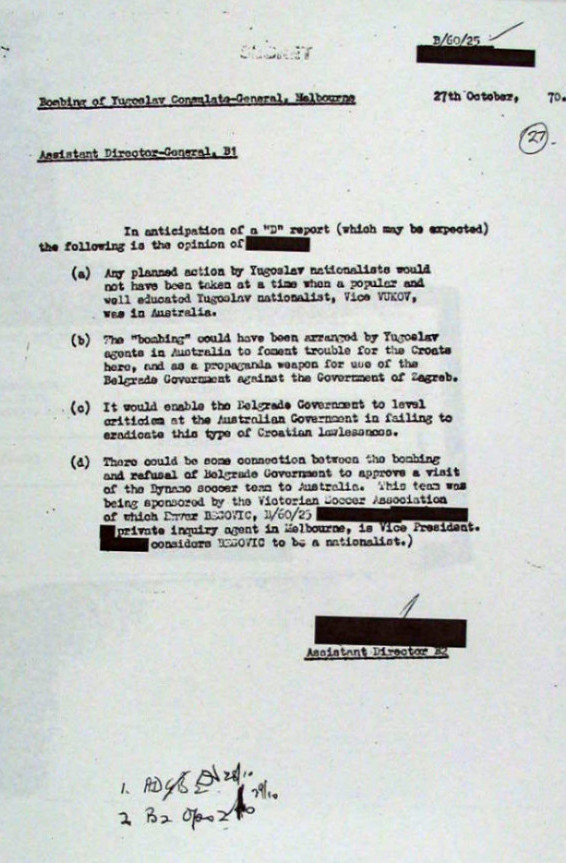 (above): A 1970 ASIO report in Begovic's file suggesting the bombing of the Yugoslav Consulate in Melbourne may have been the work of Yugoslav "agents" to portray Croats as terrorists.

On Saturday 3 December 1977 at 3.16am in the morning, a bomb went off in the JAT (Yugoslav Airlines) office in Exhibition Street, Melbourne, causing enormous damage but no casualties. Victoria Police Special Branch were called in to investigate but the Yugoslav Ambassador Aleksandar Sokorac complained that the authorities were ignoring "subversive" groups.

Before and after the bombing, there were false reports of planted bombs. According to an ASIO file on Trajkovski, on 25 August 1978, Victoria Police Special Branch Detective Geoff Gardiner investigated a break in at the JAT office but had found the lock to the office door had been broken from the inside !

In early September 1978, according to a report in the Sydney Morning Herald newspaper, 19 Croats were arrested at an alleged military training camp near the southern NSW coastal town of Bega. Begovic was supplying information to the Yugoslav Consul General in Melbourne, Trajkovski. The question is why would a Melbourne based private eye be passing on information to a diplomat in Melbourne, when the incident happened in NSW and under the scrutiny of the Yugoslav consulate in Sydney?

Trajkovski's ASIO file - details a wiretapped phone conversation he had with Begovic over the Bega arrests. 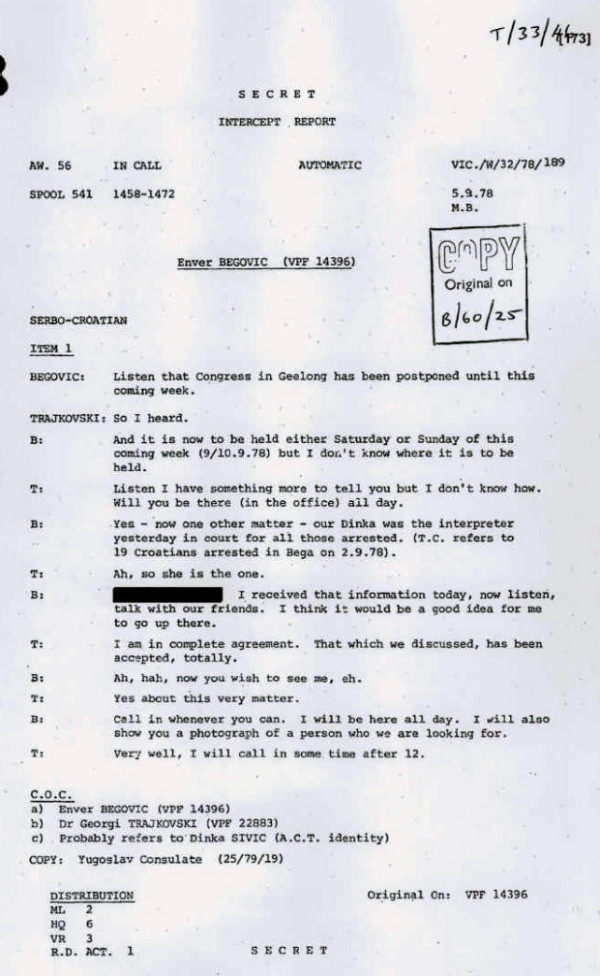 In another instance, Trajkovski asked Begovic to write down the registration numbers of vehicles parked at a Croatian demonstration and identify their owners.

Begovic infiltrated an umbrella Croatian nationalist group known as HNV and attended on 30 September 1978 its inaugural national conference in Wodonga, Victoria, a town close to the New South Wales border. ASIO noted he was feeding information back to Trajkovski, especially about the unsuspecting Ragib Advic. (from Trajkovski's ASIO file). 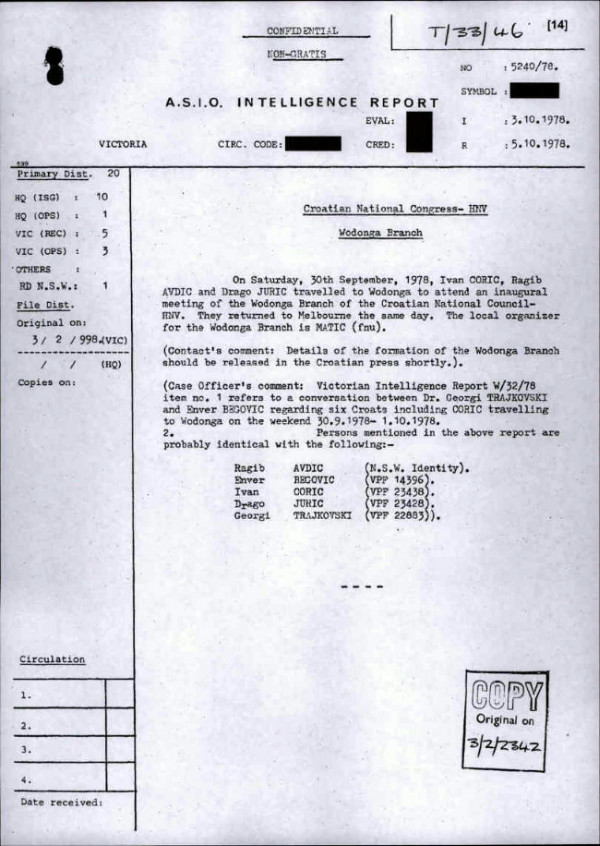 On 8 February 1979 Vico Virkez went to Lithgow Police station in News South Wales and informed on the Croat 6, including Ante Zvirotic who had known Avdic.

On 10 February 1979 Trajkovski was in a frantic manner and tried to call the Yugoslav Ambassador Sokorac on the phone but the Ambassador was suspicious that his phone was not working at a time "when all sorts of things were going on."

On 14 February 1979 Jovo Juric from the Yugoslav Embassy in Canberra flew down to Melbourne to talk to Trajkovski over urgent matters.

On the same day, ASIO had noted that a mysterious character, probably a low level operative Todor Jovicic, codenamed Nikola, had flown out of Australia for good. He had been in Australia since 1969, a year before Virkez had arrived.


BEGOVIC AND TRAJKOVSKI GANG UP ON AVDIC - Lombardic in Sarajevo

In August 1978, Avdic was denied an Australian passport and had turned to Begovic for help.  From an ASIO phone wiretap, Trajkovski and Begovic were cracking jokes at his expense:

Begovic: "It appears that they (Australian government) are refusing him a passport. That is good...Yes, he called me last night seeking assistance (laughs). I told him to ring back in around a week."

Trajkovski: "Yes - you tell him you will do everything within your power. (laughs)"

In the same file, deputy Yugoslav Consul Petar "Pero" Lombardic was in Sarajevo, the capital of Bosnia-Herzegovina, the then Yugoslav republic from where Begovic, Avdic and Virkez had come from. There is cryptic talk between Trajkovski and Begovic about things progressing well after Trajkovski had sent them things (not specified) to Sarajevo.

There is speculation that the whole Croatian 6 set up was hatched by Trajkovski in Melbourne via UDBa in Sarajevo. 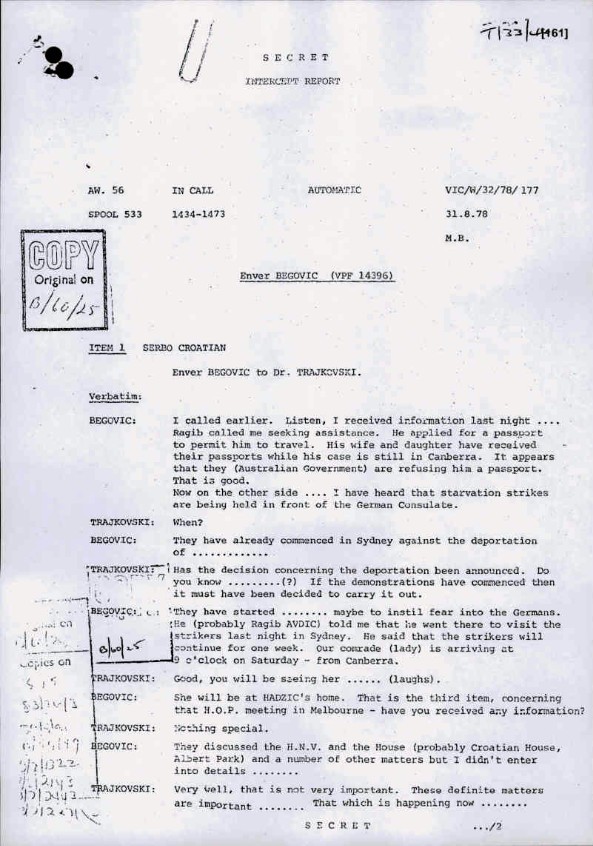 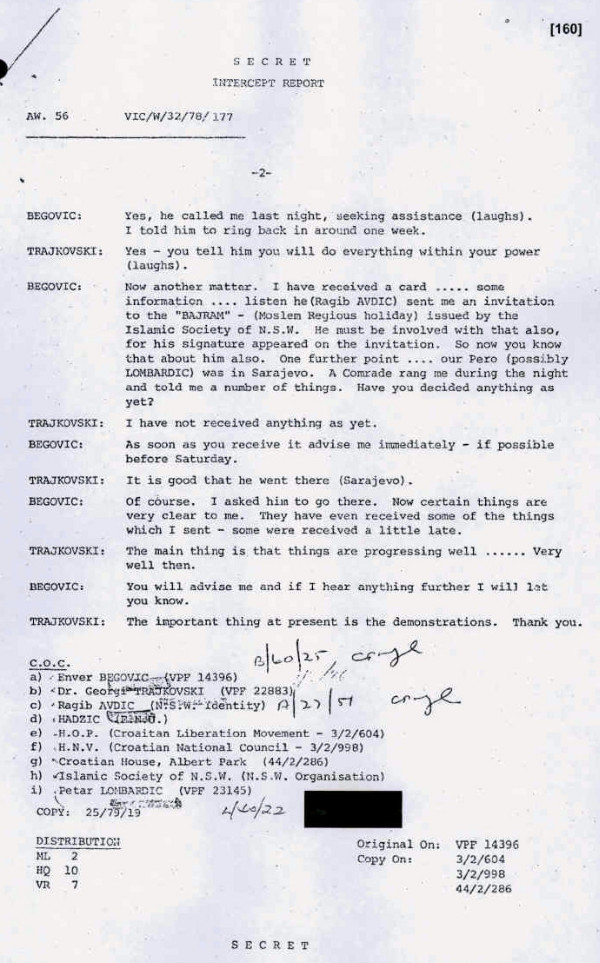 "Where are the explosive detonators?" - Asks Yugoslav diplomat

On 3 March 1978, a person within Victoria's Muslim Bosnian community called Atanas "Aco" Stojanovski, from the Yugoslav Consulate in Melbourne.

Person: "There is something - and I believe it has political connections. A man, who put detonators in Sydney - and I do not know where - was put on bail..."

Stojanovski: " Do you know where he put the detonators? 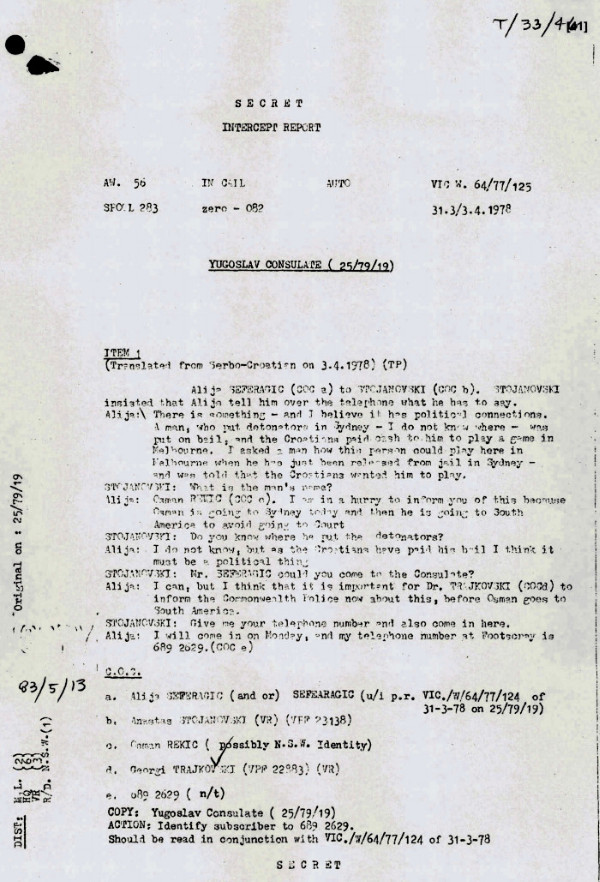 Stojanovski, in an earlier ASIO report on Trajkovski was named as the intelligence specialist who handled Croat informers. In 1978 he finished his stint at the Yugoslav consulate and eventually married a local Macedonian woman, Liilana Simonova-Stojanovska, now a prominent academic at Victoria University. They live in Melbourne. He may have the answers to the Croatian 6 case but no one in the media has ever contacted him for comment, except TEAM UZUNOV which sent an email to his wife on 10 December 2012 but had not received a response. 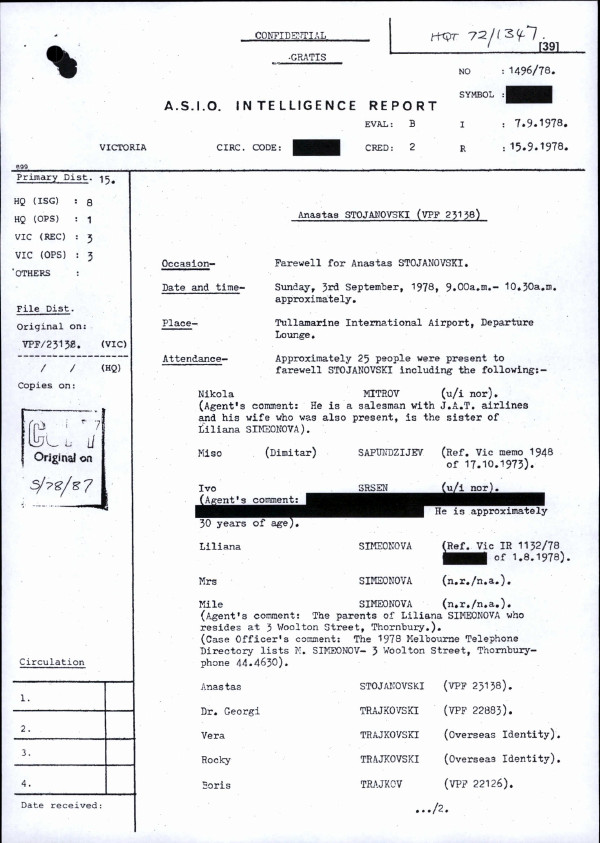 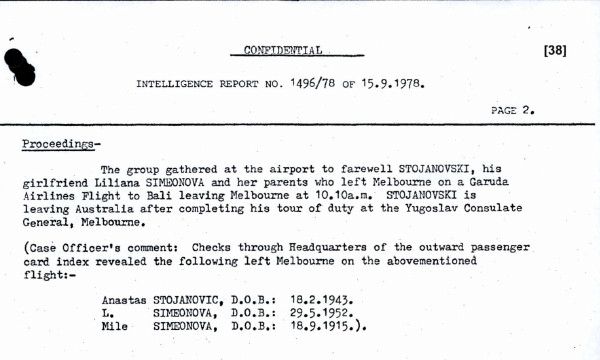 Posted by TEAM UZUNOV at 12:30 PM 2 comments: Links to this post