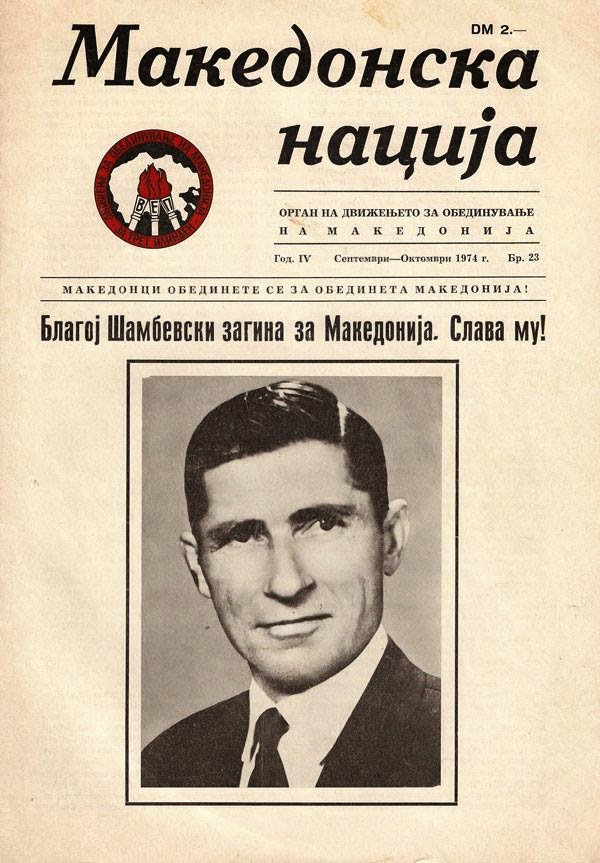 BLAGOJE SAMBEVSKI - A year before death banned from entering Australia

In 1974 a Macedonian anti-Communist dissident Blagoja Sambevski, an opponent of Tito's Yugoslavia and Secretary of the emigre organisation DOOM (Movement for the Liberation and Unification of Macedonia), was found dead at the hotel he was working at as a night porter in Munich, West Germany. A year before his death he had been rejected by Australia's security services from entering the country on a tourist visa to visit a relative by marriage.

Sambevski had been granted political asylum in Germany.

It is believed pressure from Yugoslavia on the Australian government led to denial of visa...

A Commonwealth Police Force (the forerunner of the Australian Federal Police) report, reveals that Blagoje Sambevski had applied for a visa to visit Melbourne, Australia.

The Commonwealth Police took notice of Sambevski in 1972 when he was elected Vice-President of the OKM - Osloboditelen Komitet Na Makedonija - Committe for the Liberation of Macedonia.

At a World Congress of Macedonian nationalists held in April 1972 in Munich, a split occured within OKM, a right wing became DOOM or DOM (Dvizenje za Osloboduvanje i Obedinuvanje na Makedonija) of which Sambevski had become Vice-President.

A left wing made up of Macedonian activists who had lived in the Soviet Union and Eastern Europe took over OKM and set up headquarters in Brussels, Belgium.

OKM, according to the Commonwealth Police, had a falling out with a Croatian nationalist group which was willing to allegedly sacrifice Macedonia to communist Bulgaria [under Soviet control] for supporting Croatian independence....

DOOM in Australia saw itself as countering pro-Yugoslav propaganda. 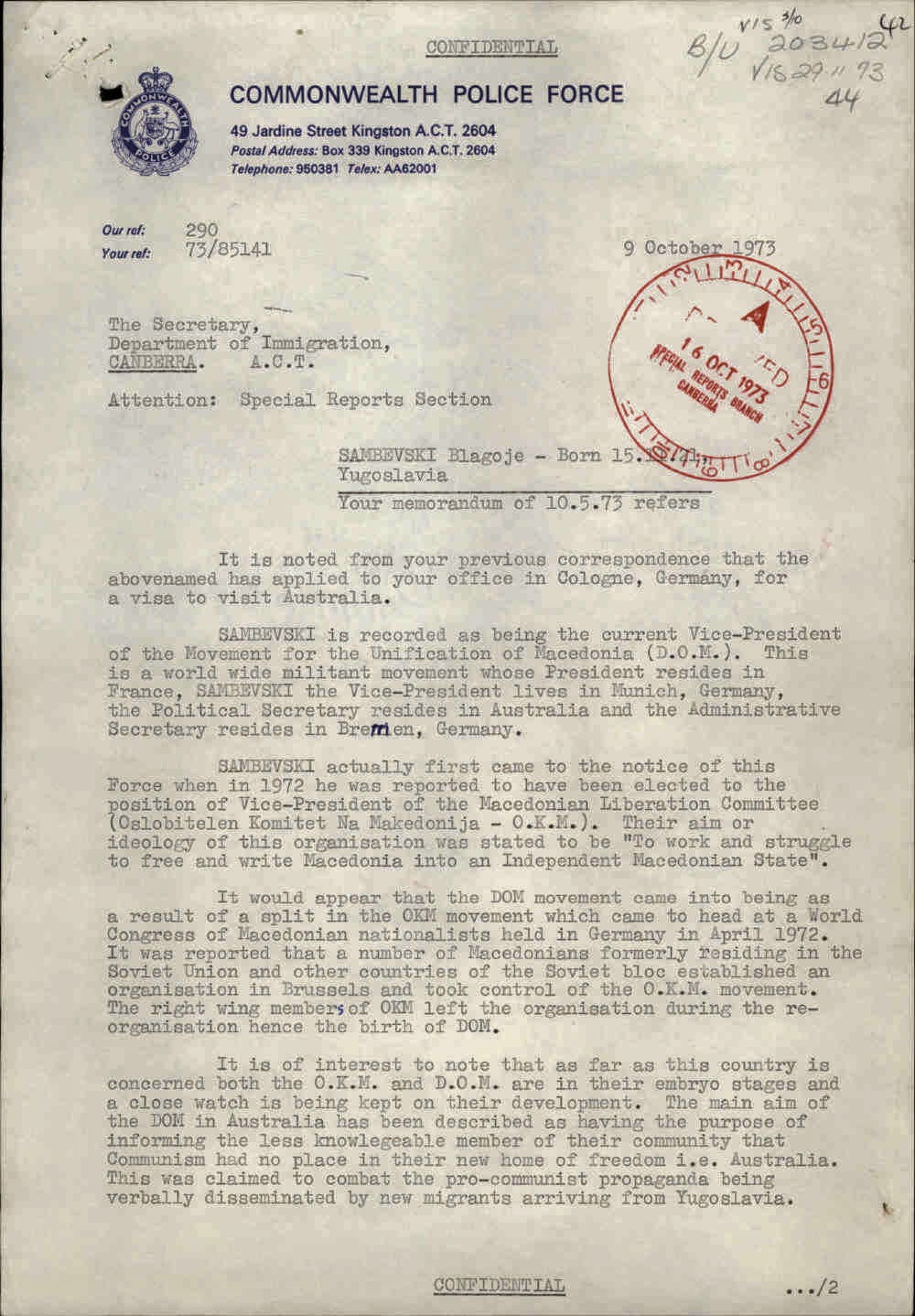 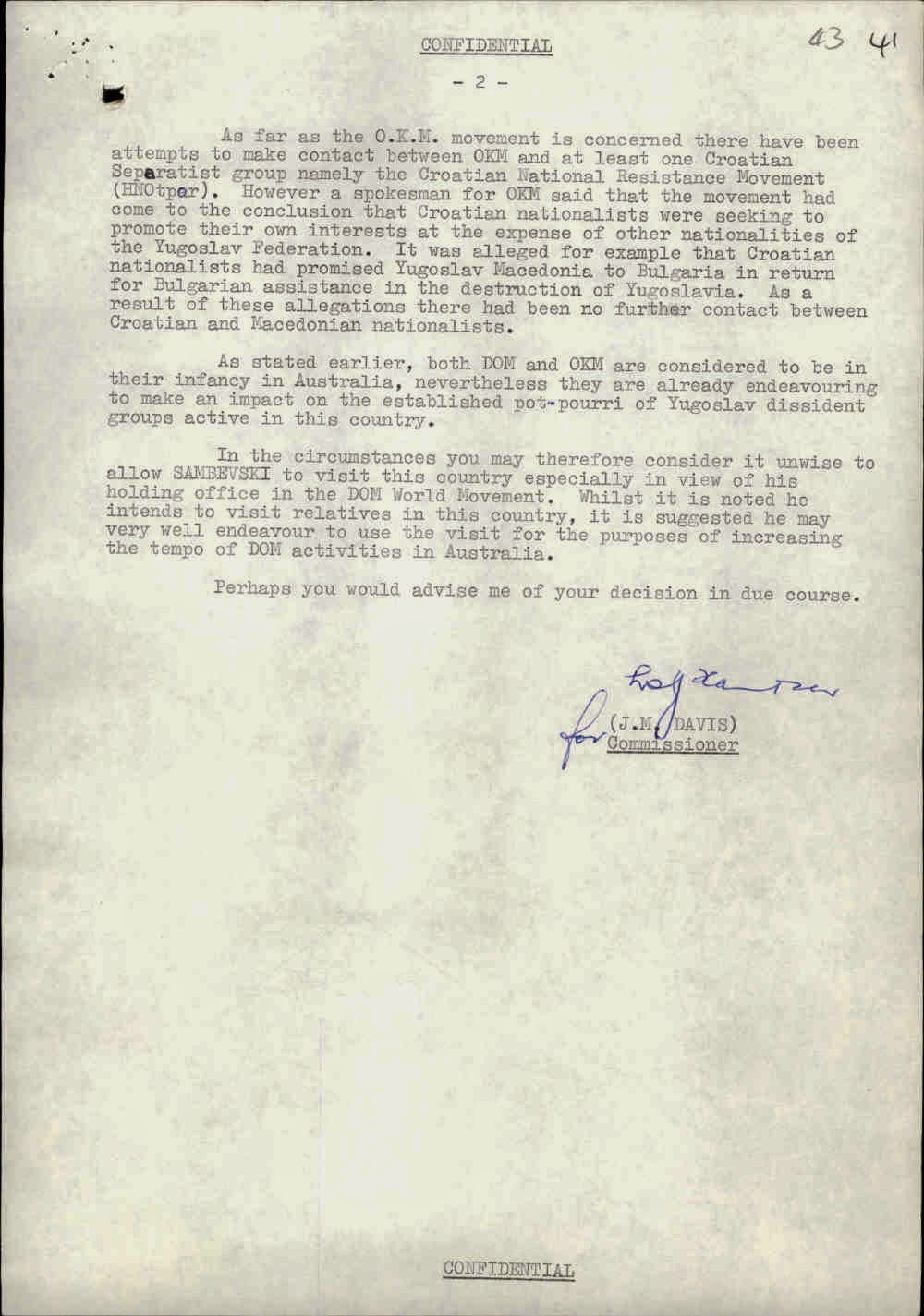 SAMBEVSKI -  Back from the dead?
ASIO blunder? This is puzzling.
A Macedonian political dissident living in West Germany, Blagoje Šambevski, was denied an entry visa by Australian authorities in 1973.

A year later he dies mysteriously at work in a Munich hotel room as a porter.

In 1981 ASIO have put him on the alert list of individuals they don't want to enter Australia.

A number of explanations:

2. Šambevski did die & ASIO never updated it's files and assumed he was still alive? 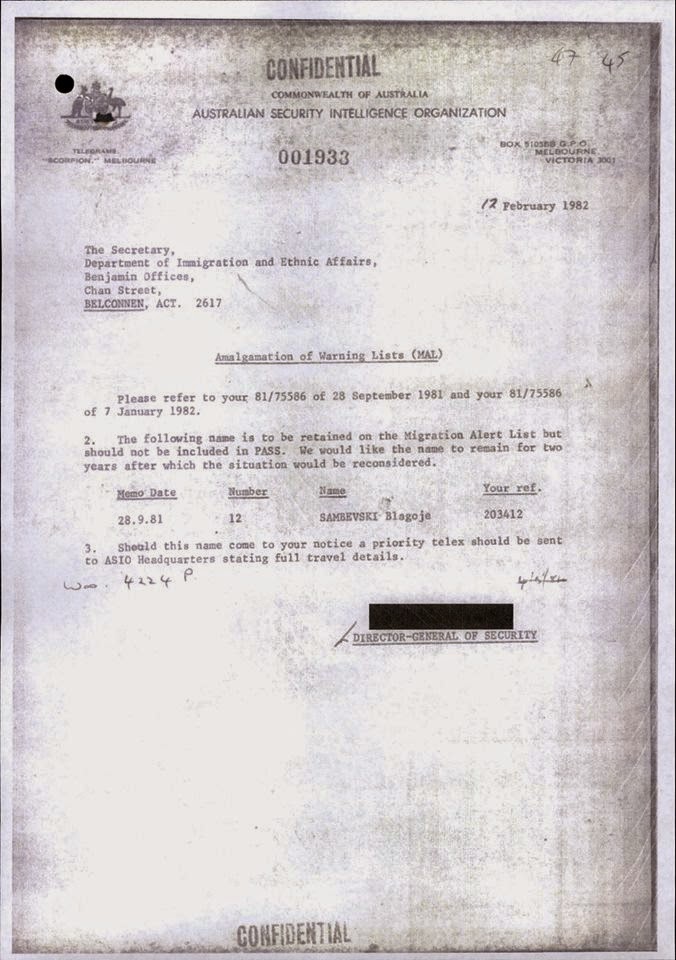 Posted by TEAM UZUNOV at 3:11 AM No comments:

SERBIA'S COVERT USE OF RELIGION 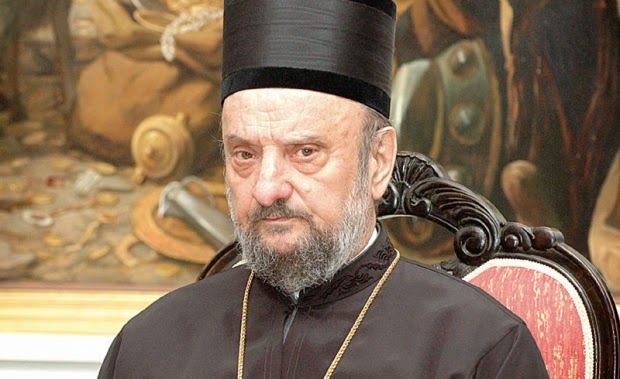 Serbian Orthodox Bishop Kacavenda, caught in a sex scandal, and blackmailed by the then Yugoslav Communist intelligence service, UDBa, to spy on fellow priests during the 1970s and 80s. The use of religion as a covert manner for espionage in the Balkans is one of the oldest tricks in the book.

It is one of the oldest tricks in the book, especially in the Balkans, the use of religion by the state to conduct covert intelligence operations.

The Serbian State funds the Serbian Orthodox Church, which is waging a campaign against the Macedonian Orthodox Church by sponsoring a "rebel" Bishop John (Jovan) - real name is Zoran Vraniskovski... but it's way of destabilising Macedonia by hauling it to various human rights commissions over "free of worship" etc.

Officially the Republic of Serbia recognises Macedonia and a Macedonian nationality but still wants to keep its hand in the diplomatic poker game over Macedonia, especially with Bulgarian influence growing and so uses religion as a way of blackmailing Macedonia.

Recently, Serbia's former President Boris Tadic said that he regretted in not officially apologising for Serbia's historical injustices committed against Macedonia but would not elaborate. see link

Using a religious dispute is deliberately aimed at Macedonia's Cafe intellectual elite, many who are not interested in religion and so can't see the real danger the "church dispute" poses to Macedonia. The real issue is not about religion but about power.

It's very very clever and shameful, when you consider Macedonia, a tiny impoverished nation, gave humanitarian aid to Serbia when it was hit by floods. see link:

In the past the Yugoslav communists blackmailed a Serb Bishop Kacavenda, a pedophile, into spying for UDBa, the intelligence service, during the 1970s and 80s.

It's a bad public relations exercise for the Serb nationalist cause: on the one hand it plays the victim card over Kosovo but is now waging an aggressive campaign, in the guise of religion, against Macedonia.

It's not the behaviour of a "victim" but a "predator.

---------
1971 BRATSVO I EDINSTVO (Brotherhood and Unity) ? Both Serb clergy and secularists reflect the same view1971 Australian Foreign Affairs document - Australian Ambassador to SFR Yugoslavia pays a visit to SR Macedonia.Ambassador R.H. Robertson: "En route to Skopje we visited the Serbian Orthodox monastery at Studenica and had some conversation with the Deputy Abbott (Igumen). I had the opportuntity of asking...a casual question about the Macedonian Orthodox Patriachate: He looked extremely dour and replied the "Patriachate is a political creation upon which I shall not comment." The reply reflected, on the church level, the tendency of many Serbians still to claim that the present [Socialist] Republic of Macedonia was in fact more accurately described under its pre-war title "South Serbia."--------------TEAM UZUNOV note: we are not aware of the Serbian clergy being arrested by UDBa for making those disparaging remarks. And we are surprised that Canadian-Serb film maker Boris Malagurski doesn't mention this chauvinism in his conspiracy laden film, The Weight of Chains." 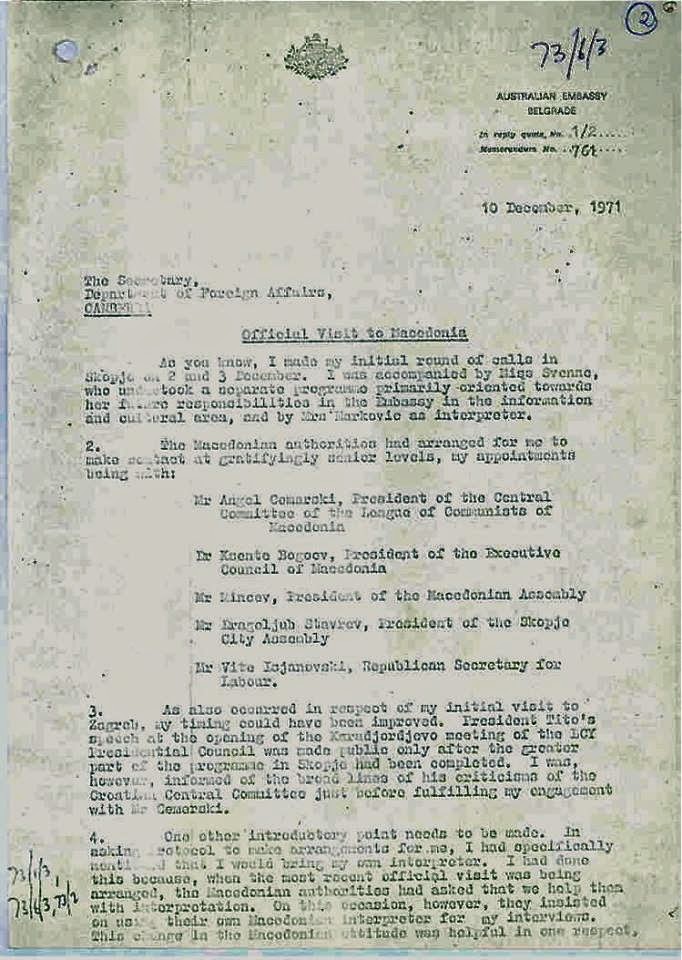 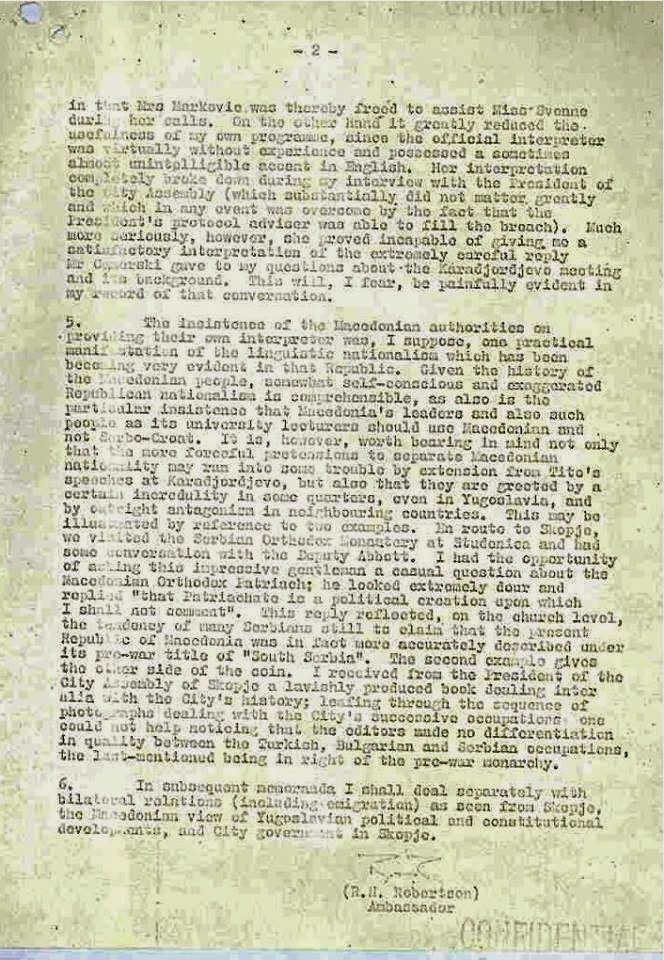 The bias against the Macedonian Church was recored by a US Diplomatic cable, published on wiikleaks:

Serbian Orthodox Church removes one of its own Bishops for being sympathetic to Macedonian Church's claim to autocephaly...

With Amfilohije's appointment, the Holy Synod (the the SOC
governing body) removed Pavle's previous assistant, Metropolitan
Jovan of Zagreb, Ljubljana, and Italy, replacing the oldest bishop
with the longest-serving. The SOC press release said the choice of
Amfilohije was not a hint about the choice of the next Patriarch.

The press release did not explain the decision to replace Jovan.
Professor of religion and SOC insider Mirko Djordjevic told us the
Synod probably chose to remove Jovan because the SOC perceived as too sympathetic toward the Macedonian Orthodox Church's claims for
autocephaly. Makojevic told DCM the change was "routine."

link:
Posted by TEAM UZUNOV at 9:31 AM No comments: