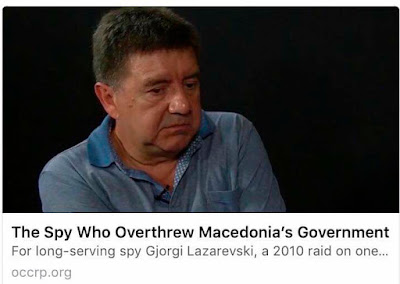 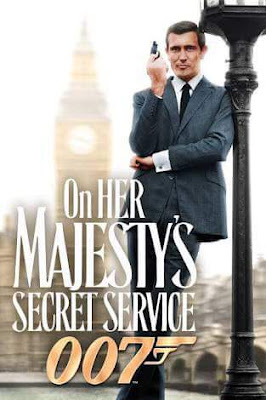 Former Macedonian intelligence officer George Lazarevski says he was one of the spies who leaked the secret recordings which brought down the Macedonian government of Prime Minister Nikola Gruevski, implying that he was acting on his own rather on the orders of a foreign intelligence service, according to a USAID funded news website, OCCRP.

USAID is the official US government run international aid agency. see link here for its recent operations in Macedonia…

The leaked wiretaps were later used by Macedonian Opposition leader Zoran Zaev to bring down the Gruevski government in 2016 and eventually take-over as Prime Minister during what became know as the Colour Revolution movement, largely funded by the West.

"Lazarevski was one of the three Macedonian intelligence agents who helped topple the allegedly corrupt and authoritarian regime of the then-Prime Minister Nikola Gruevski by leaking hundreds of thousands of audio files. The recordings had been made by regime loyalists from his agency while illegally wiretapping thousands of Macedonians over three years.

"Lazarevski had known about the massive interception of conversations -- which took place without court orders -- since 2008. But when he saw special forces raiding A1 TV, a station that had been critical of the government, he finally had enough.

"“It was a shock for us,” Lazarevski remembered.

““I did not expect to experience such a thing in Macedonia,” he told OCCRP.”

Surprisingly, in all the claims of corruption against Gruevski, probably true in some or most cases, his coalition partner from the Albanian nationalist party DUI, Ali Ahmeti, ended up smelling like a bouquet of roses. It beggars belief that somehow Ahmeti, a former terrorist who started the 2001 war in Macedonia, wasn’t involved in any of the action or taking a piece of the pie. It has been a very selective look at corruption, bypassing Ahmeti, the other Albanian parties as well as SDSM, the Social Democrats of Macedonia, Zaev’s party. Ahmeti has a powerful patron in the United States. That’s his trump card.

The author of the OCCRP article is Borjan Jovanovski, a prominent Macedonian journalist of Serb background, who was part of Serb-Macedonian “collective team” involving Serb journalist Stevan Dojcinovic of KRIK, an affiliate of OCCRP based in Belgrade which “broke” a Serbian spy scandal story alleging Russian-Serb interference in Macedonia, allegedly inciting the 27 April 2017 attack in the Macedonian Parliament on Zaev and his deputy Radmila Sekerinska., who was violently assaulted by having her hair yanked. The culprit has since been quite rightly jailed (see photo below): 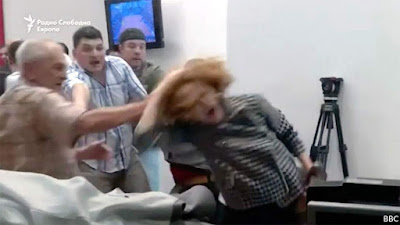 But the whole story smelled right from the start. Team Uzunov acting on a tip from a British source that something was being cooked in Macedonia, contacted Jovanovski about two weeks before the parliamentary attack asking if he was aware of possible Russian-Serb interference in Macedonia. He aggressively denied such a scenario. See link here

Jovanovski is also known for his aggressive anti Macedonian and pro Serb-Yugoslavist views, which the US Embassy in Skopje, the Macedonian capital, has not denied. see link here and here

A fortnight passed then all hell broke loose and Jovanovski was claiming Serb-Russian interference in Macedonia. How and why did he change his view so quickly? How was it possible to put together the story so quickly if only weeks before he was denying such a possibility?

However, he refuses to back up his claims by holding or calling for a protest outside the Serb Embassy in Skopje, Macedonia, even though he has called for protests against all Hungarian Embassies in Europe over Hungarian Prime Minister Viktor Orban’s tough stance on illegal migrants. 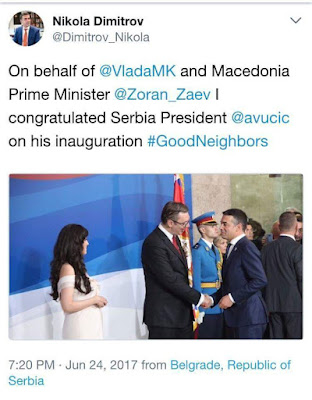 But the story gets more interesting… the Zaev government has endorsed the man allegedly at the centre of the parliamentary attack, Serb President Alexander Vucic, whose embassy and whose intelligence officer are implicated. This remains very strange, almost sounds like collusion.

It’s no coincidence that this fear of “Russian interference” in Macedonia via Serbia was used as a pretext by incoming Macedonian Foreign Minister Nikola Dimtrov to get into NATO as quickly as possible, even if it meant changing Macedonia’s name to appease Greek nationalist demands; give in to the Albanian nationalist bloc in Macedonia over bilingualism which would mean federalisation and eventually partition; and giving up its ethnic minorities in neighbouring countries such Bulgaria with a so called but one-sided “Good Neighbourly Agreement.”

If the whole basis for the Serb Spy story is dodgy then it places a large question mark over the credibility of Lazarevski and his claims; that he hasn’t been put up to it by a foreign intelligence service to cover its tracks. Consider this: who would be the most likely candidate as the foreign intelligence service behind Lazarevski and the whole wiretapping scandal in Macedonia? 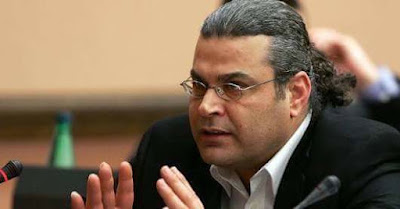 Macedonia is firmly in the Western camp. You might recall the Khaled El Masri rendition / torture scandal from 2003.

The innocent German Lebanese man arrested in Macedonia at the behest of the United States and handed over to the CIA. El Masri was taken to Afghanistan and “rendered" on the mistaken belief he was an Islamic terrorist.

The European Court of Human Rights later awarded El Masri compensation when he sued the Republic of Macedonia and was scathing in its judgment of El Masri’s mistreatment. link here

UBK is Macedonian intelligence and it regularly consults on counter-terrorism with the United States, namely the Central Intelligence Agency (CIA). 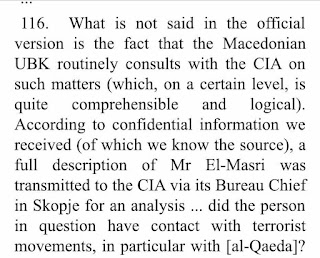 Posted by TEAM UZUNOV at 6:07 PM No comments:

ZAEV & ORBAN - can they get along? 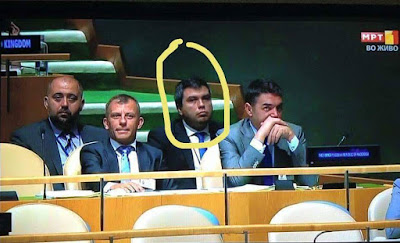 Hungary’s Prime Minister Viktor Orban is the politician you either love or hate. It’s no secret that he has been very close to ex Macedonian PM Nikola Gruevski and in response reviled by supporters of the current Macedonian PM Zoran Zaev. The question is can Hungary and Macedonia still work together in light of Macedonia wanting to join the EU and NATO, both of which Hungary is a member?

Joining the invective against the combative Orban has been very influential Macedonian journalist of Serb background Borjan Jovanovski. Jovanovski demanded that protests should be held outside every Hungarian embassy in Europe over Orban’s tough stance on illegal immigration. 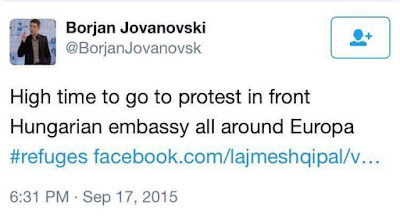 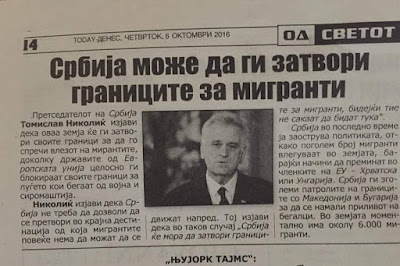 Orban also stands accused of conducting espionage against Macedonia. A former Macedonian intelligence officer Alexander Dinevski has levelled charges against him. Dinevski was convicted of espionage in 2014 and went to prison. He claimed he was a victim of then PM Gruevski. Oddly, the current Zaev government hasn’t overturned Dinevski’s conviction. background to Dinevski story here

The level of intense animosity aimed at Orban has been remarkably high in comparison to say Serbian politicians. For instance when Serb President Tomislav Nikolic called for exactly the same tough approach to illegal immigrants, there were no calls for protest outside all Serb Embassies in Europe by Jovanovski. In fact Jovanovski stubbornly refuses to call for any protest outside the Serb Embassy in Skopje, Macedonia, despite claiming to be an internationalist. Likewise Maricic. (see below for more details).

In another example of inconsistency a protest was held in Skopje, Macedonia against Croatian MEP Marijana Petir for endorsing Nikola Gruevski last year. When Serb President Nikolic, who has been a strong supporter of Gruevski, arrived in Macedonia in the same year, no protests were held against him. see story here

TEAM UZUNOV blog contacted Zoltan Kovacs, Orban’s spokesman, for a response over the appointment of Maricic as PM Zaev’s advisor. Kovacs has instead passed it on to the Hungarian Foreign Affairs Ministry for comment. As yet no response has been forthcoming.

The question remains can PM Zaev have any working relationship with Orban, a critical NATO ally in Eastern Europe, if his supporters and advisors hold an animosity towards the Hungarian PM not displayed towards other politicians in the region who stand accused of similar if not worse transgressions?

Alexander Vucic, Serbian Prime Minister now elected as President, has locked up over 80 political opponents and journalists as part of a campaign to clamp down on dissent over his rule. see link to story here

Kosovo strongman Hashim Thaci presides over massive crime and corruption involving the vile trafficking of human organs (see link here), something which Orban is not known to have been involved in.
-------
TEAM UZUNOV blog contacted Bojan Maricic 2016 and received a response but he wouldn’t answer the questions we posed to him:

Bojan Maricic: Thank you for your message and I am sorry for the delayed answer. The questions you ask demand extensive elaboration, so please give me few more days to clean-up my schedule and write you back. By then, I need to tell you that you have very interesting approach analyzing the phenomenon of cultural hegemony in Macedonia. With some of your statements I agree while some I see as reductionist but let me elaborate on this in my answers.

Question 1: I have noticed you haven't said much about the Serbian nationalist antics of Serbian President Tomislav Nikolic and his Prime Minister Alexander Vucic. Any reason why?

Question 2: You haven't for instance called for demonstrations outside the Serbian Embassy in Skopje over the 14 May 2015 rehabilitation of ultra nationalist Chetnik leader Draza Mihailovic who was anti Macedonian, Croat and Albanian, nor the provocative comments from Serb foreign minister Ivica Dacic over Macedonia's support for Kosovo's UNESCO application. Could you explain why?

Question 3: It would appear both major parties in Macedonia, VMRO-DPMNE and SDSM still view BELGRADE as a powerful influence in Macedonia. You have a controversial US-Serb businessmen by the name of Veselin Jevrosimovic who owns a large chunk of the Macedonian media (newspapers and one tv station) and is pro PM Gruevski and you had SDSM recently use on "trial" a controversial Belgrade PR company called Ruskin & Hunt, whose managing director Miljan Skecic was connected to indicted war criminal Vojislav Seselj.

Are you concerned that the Serbian tabloids which spin such virulent anti west sentiment have enormous influence in Macedonia and Macedonian politics? In your opinion what can be done to counter the hostile propaganda from BELGRADE?

Question 4: On New Years Eve 2016 all four commercial TV stations in Macedonia played hour after hour after hour of Serbian turbo folk music and I have received many complaints from Macedonian artists who say the Macedonian entertainment industry is being deliberately strangled by the government who have a vested interested in importing the likes of Ceca etc. Your thoughts on this "re-Belgradisation of Macedonian culture?"

Question 5: It's very rare in any modern democratic state for the President or the Prime Minister to appoint a sibling (brother / sister) or a cousin as the Chief of Intelligence. Isn't it outrageous for PM Gruevski to have had his first cousin Saso Mijalkov as Intelligence boss? Your thoughts on the so called "putsch?"

Question 6: Nothing from you on Greek governing party Syriza trying to block Croatian MEP Marijana Petir from establishing a Euro Parliamentary group, Friends of Macedonia. Any Reason? Croatia and the Croatian communities abroad took an active role in lobbying for diplomatic recognition of Macedonia in 1991-92 whilst SERBIA opposed it.
------------

Posted by TEAM UZUNOV at 7:29 AM No comments: