It has taken major Melbourne newspaper The Sunday Herald Sun 7 months to realise there is a parking problem at Melbourne Airport.! 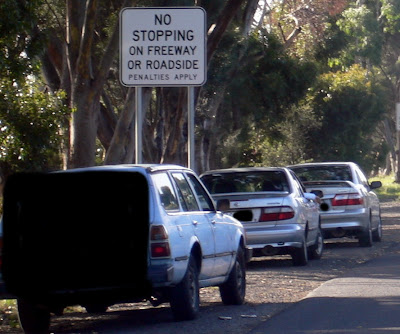 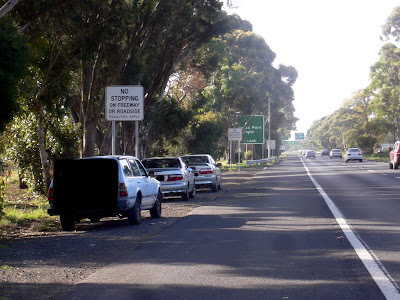 In light of the recent terror attack on Moscow Airport, Russia, you would think that Melbourne Airport authorities would enforce their own security measures...But over the past couple of months, motorists, to avoid expensive parking at Melbourne Airport, (Victoria state, Australia) or to simply watch aeroplanes fly over, have been parking in the emergency stopping lane or roadside on the Tullamarine Freeway, about 1 to 2 kilometres from the Airport entrance.

By law this is forbidden, as the above photograph demonstrates. Photograph taken on Monday evening, 24 January 2011.

Drivers may not necessarily pose a direct security threat or even be members of Al Qaeda !

Heaven forbid should any attack happen but should an incident arise then the potential is there for clogging the freeway or simply creating an obstacle for emergency response teams.

No regular security or police patrols have been observed in keeping the emergency stopping lanes clear on the Tullamarine Freeway. Perhaps, Melbourne Airport officials should lower the expensive parking fees to get motorists off the freeway. NEW moves to fortress off the roadside on the approach to Melbourne Airport have been blamed for creating fast-food parking havoc.

Staff at the McDonald's airport outlet have complained that parking fee dodgers are clogging the restaurant carpark as they wait for flights to arrive.

One said the problem had grown worse since VicRoads began installing permanent fencing along the Tullamarine Freeway as part of a $4.5 million "safety upgrade" this year.

"The carpark is always full and customers and sometimes even staff can't get a park," the staff member said.

Angry motorists, including Ferntree Gully's Robyn Key, complained the works were about forcing people to pay $12 an hour for short-term parking.

"They are just trying to force people into their ridiculously priced parking," Ms Key said while waiting at McDonald's for her daughter to fly in from Tasmania. "It's totally a money grab."

But Melbourne Airport spokeswoman Anna Gillett said the practice was a traffic hazard.

"(The fencing) is to stop people from parking on the side of the road when they are waiting for a plane to arrive," Ms Gillett said.

"That's actually really dangerous, so as part of a safety initiative they are erecting safety barriers along there."

In the 2009-10 financial year, Melbourne Airport reaped close to $90 million from its carparks.

An Australian Competition and Consumer Commission report released this year was scathing about the airport's parking.

Former ACCC chairman Graeme Samuel, who retired last month, accused the airport of price gouging by not allowing any alternative to its own carparks.

"By reducing the ability of alternatives to compete, Melbourne Airport can increase demand for its own car parking services, charge higher prices to consumers and, therefore, earn monopoly profits," Mr Samuel said.

The Sunday Herald Sun last week saw several cars pulled up on the freeway reserve, despite signs warning of $73 fines.

"The road safety project is not related to parking issues," he said.