Newly de-classified Australian Security Intelligence Organisation (ASIO) documents reveal that an Australian man, Lewis Kent, later to become a Federal Member of Parliament had a direct link to Alexander Rankovic,  the infamous Chief of Yugoslav Intelligence (UDBa / SDB) and deputy to Marshal Tito, in 1964 and was certainly working as a spy for communist Yugoslavia in Australia. 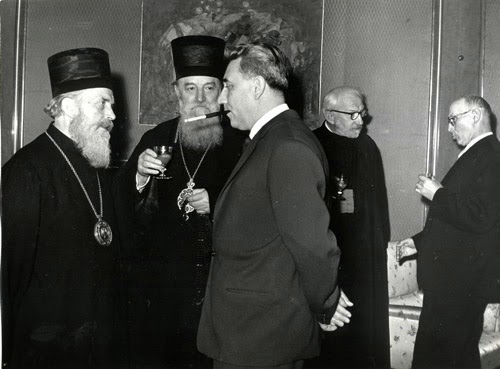 The National Archives of Australia has just released the second ASIO volume on Lewis Kent (Volume 1)... It released Volume 2 first.

In a 1965 a Commonwealth Police report to ASIO, a bunch of letters were intercepted which reveal that Lewis Kent and his sidekick Marjan Jurjevic (an associate of Australian leftist politicians Jim Cairns and Bill Hartley) were instructed by the very Chief of UDBa, the infamous Alexander Rankovic, who later fell in 1966 after being discovered tapping Tito's phones, to provide intelligence for Yugoslavia under the cover of a group called the Yugoslav Settlers Association (YSA) in Australia 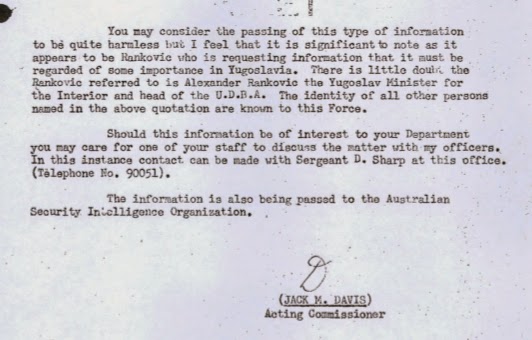 The equivalent would be Yuri Andropov, the Chairman of the KGB, directly running an US Congressman as a spy... This is an incredible find...

The document also reveals that prominent people in Skopje, The Socialist Republic of Macedonia, then a part of the Yugoslav federation wanted to be included in the loop. 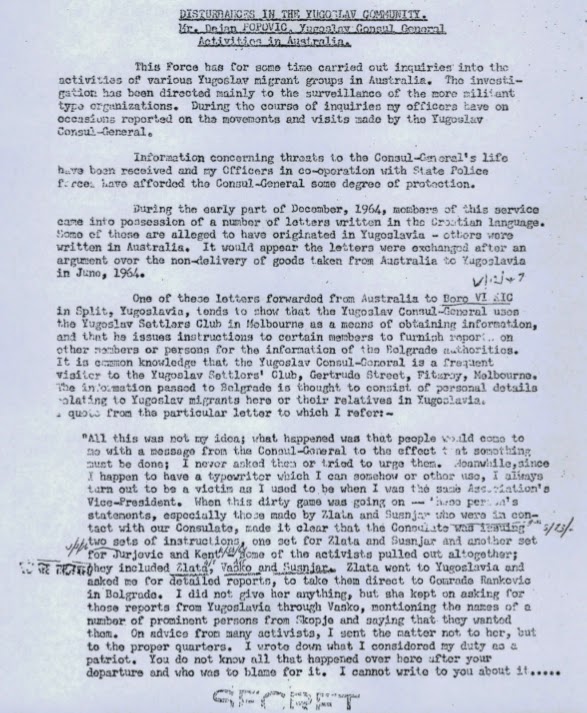 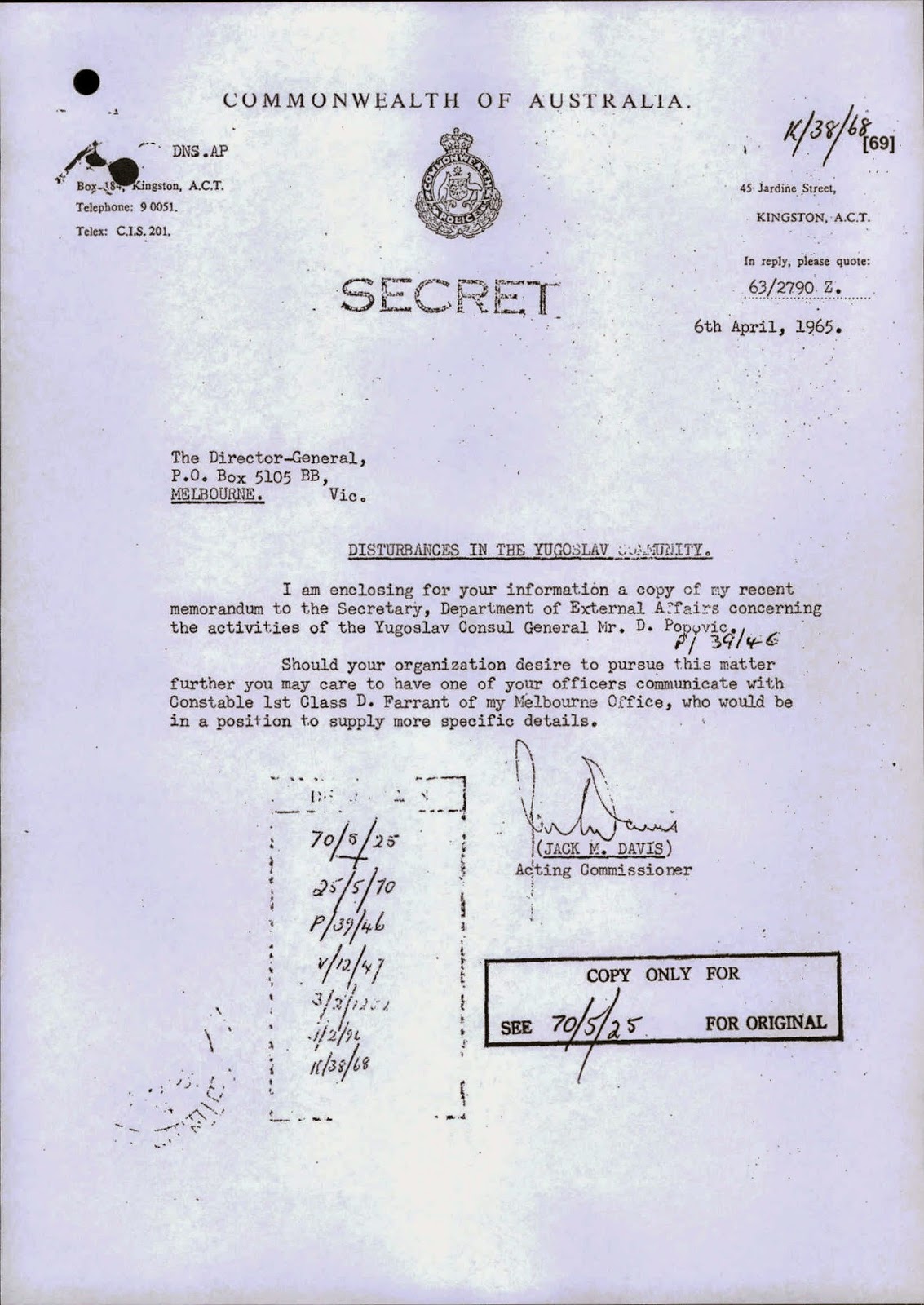 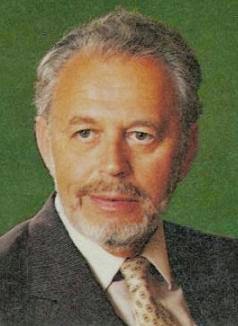 In a 1982 ASIO report on Federal MP, Lewis Kent, his "activities" were listed:

7-1-1964: "Kent suggested that they set fire to the home of Srecko Rover [controversial Croat leader in Melbourne, Australia] and that other known fascists would be given attention (either by fire, bombing or by kidnapping)

on 13-2-1964 Kent said: "we will have to burn ROVER's home, then the church, everything."
In 1964 Kent had dinner with the Yugoslav Consul General, Dejan Popovic, on a visit to Melbourne.

In the same year Popovic telephoned Kent twice during a visit to Melbourne and visited his home.


In 1976 Kent invited Dr Georgi Trajkovski, Yugoslav Consul General in Melbourne and believed to be the Croatian Six set up mastermind, to dinner.

Kent was chairman of the controversial Australian Yugoslav Welfare Society, set up by Trajkovski, and which was accused of spying upon members of the Croat, Macedonian communities in Melbourne.

source: ASIO file available in the National Archives of Australia.www.naa.gov.au 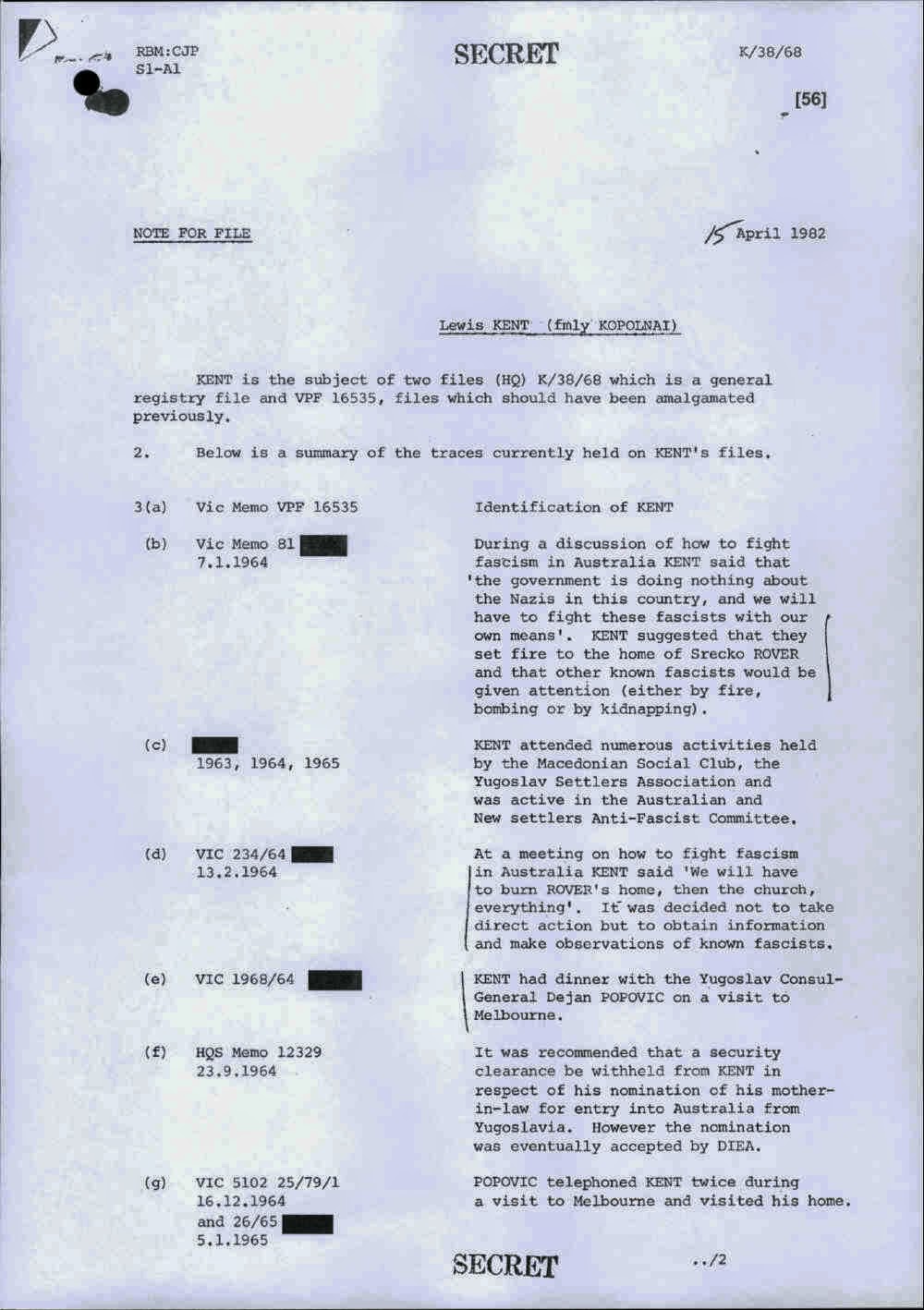 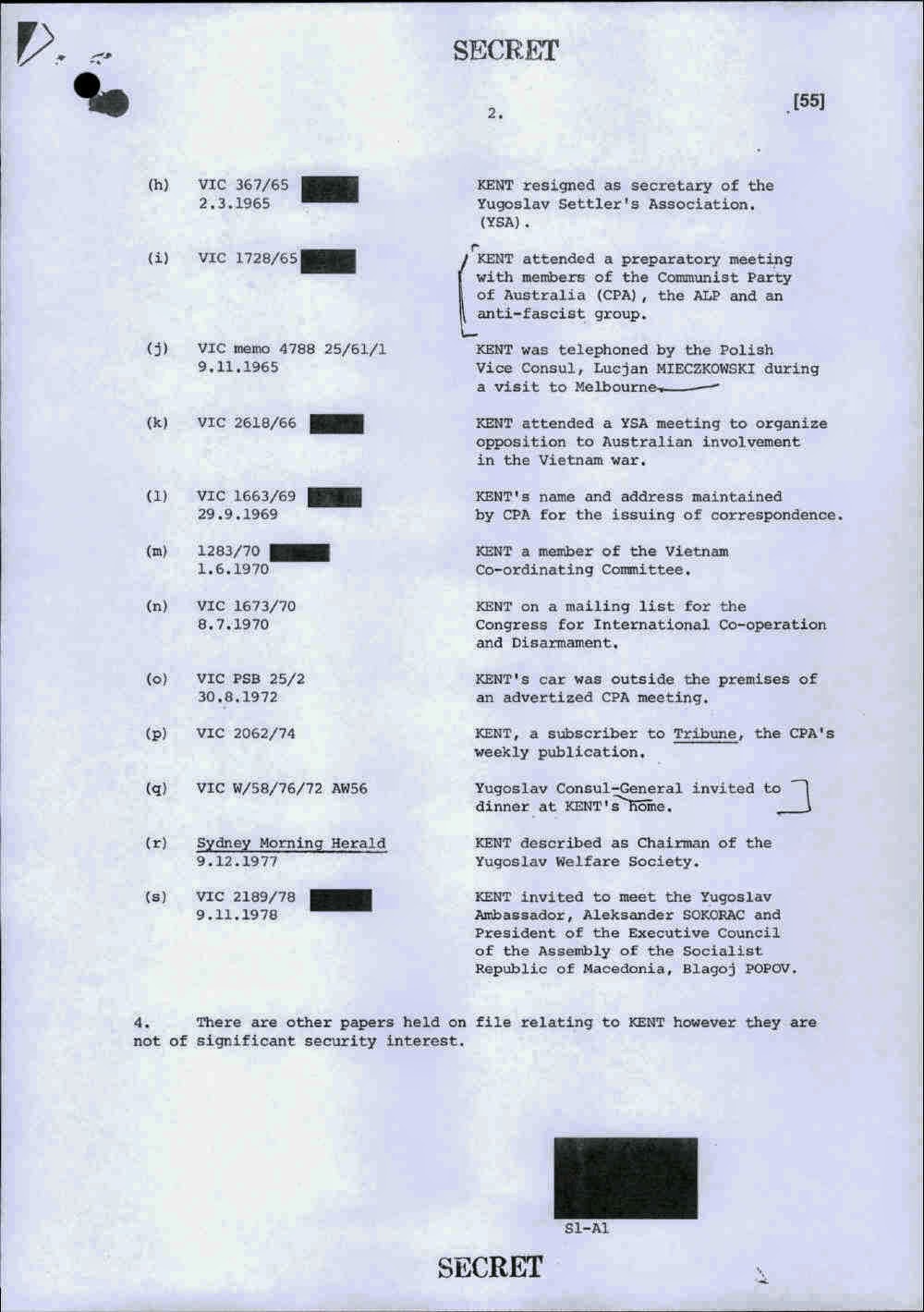 In fact Detective Snr Sergeant Arnold spoke to the man at a Yugoslav consulate cocktail reception for Aco Petrovic, from the Serbian Matica, visiting Australia in November 1983.

This is an AFP report handed to ASIO and inside Lewis Kent's ASIO file.www.naa.gov.au

In another report from 1983, Kent got in contact with Anton Buneta, identified as a Yugoslav intelligence officer by ASIO. 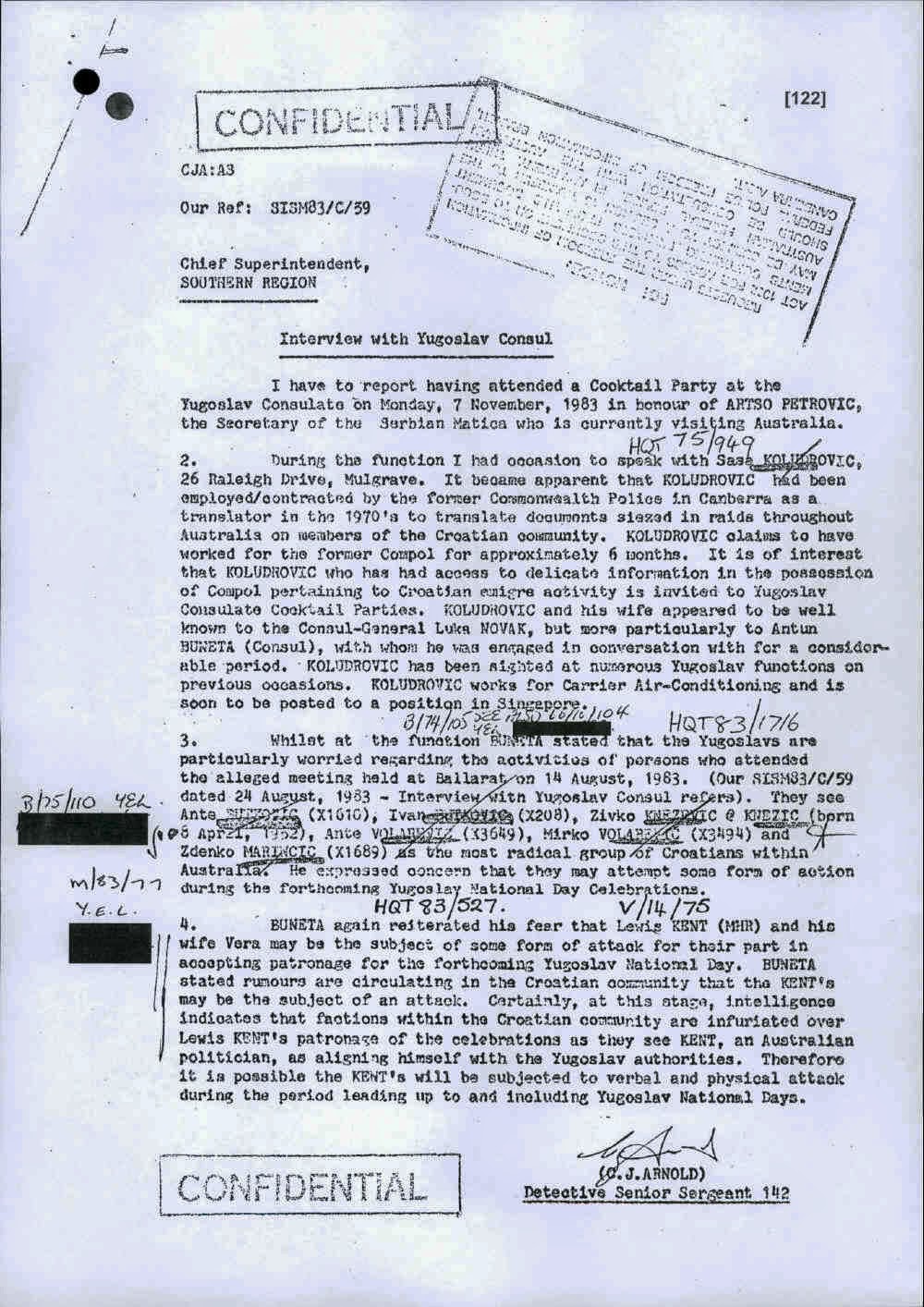 LEFT ON LEFT & "Radical Croat Chic" - In the 1980s a splinter group, HDP, from the mainstream Croatian nationalist movement emerged, moving to the left and aligning itself with "progressive forces" such as the Australian Trotskist group, the Socialist Workers Party... but also agitating for Croatian independence from Socialist Yugoslavia.

In the ASIO file of ex Federal MP Lewis "Bata" Kent, Kent, a hardcore leftist himself and supporter of Tito's Yugoislavia, was determined to destroy this group...HDP and its links with the Australian Left.

It also undermines the stereotype of all "Croatian nationalists" being labelled as right wing Ustashas, as was being pushed by Socialist Yugoslavia at the time.

In 1982, the HDP organised a dinner-dance in Melbourne, Australia and invited a representative from the Palestinian Liberation Organisation (PLO), Anton Shaer, and the Irish Republican Movement, Barry Hughes to give a talk. Also present was the ALP MP for the state seat of Keilor, Australian-Croat, George Seitz.

The event was reported in the local Croatian newspaper, Hrvatski Tjednik and a copy sent to PLO Heaquarters in Damascus, Syria. On finding out, Yugoslavia, a long time supporter of the PLO, protested.

The money shot quote: "PLO will choose its friends." 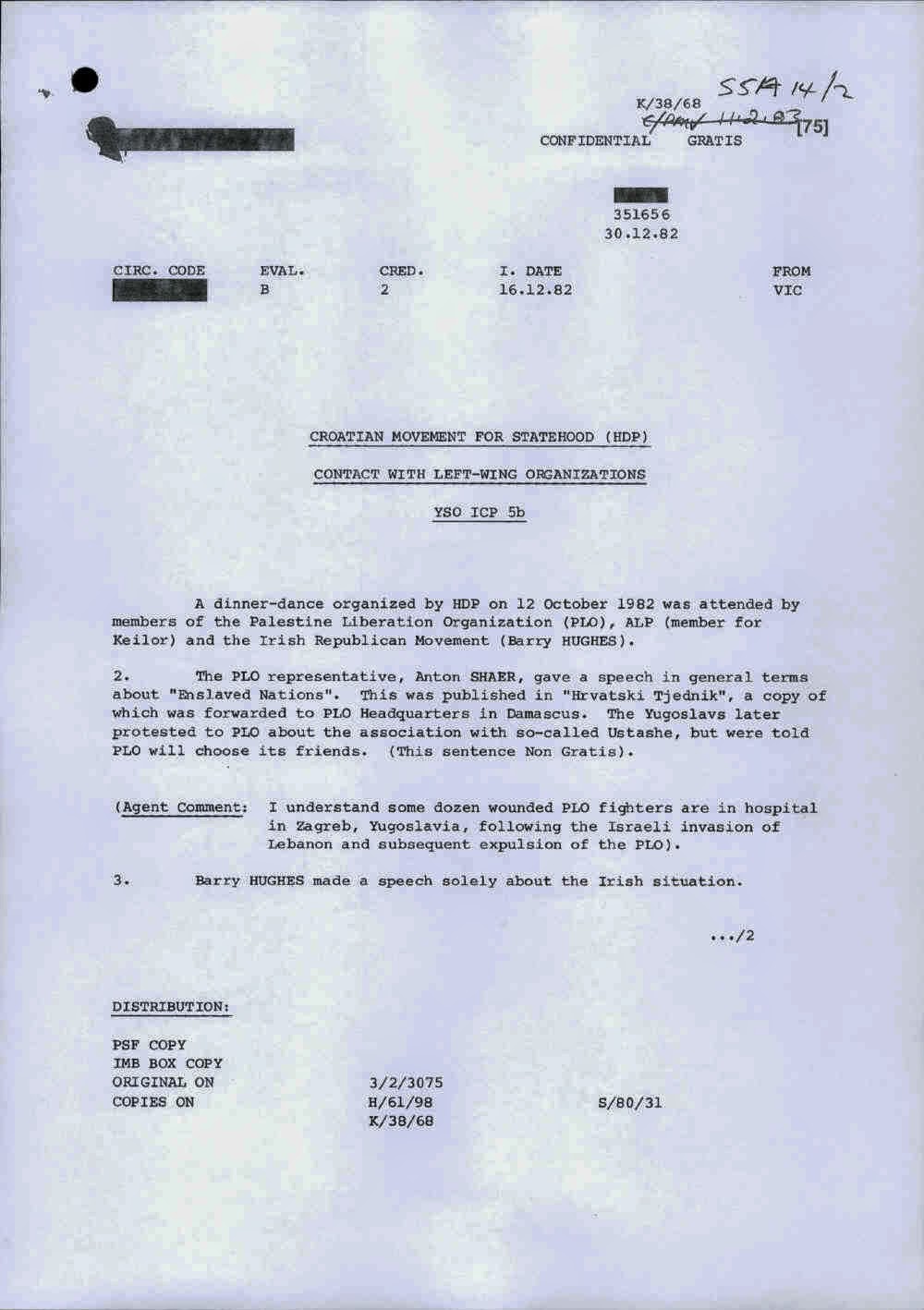 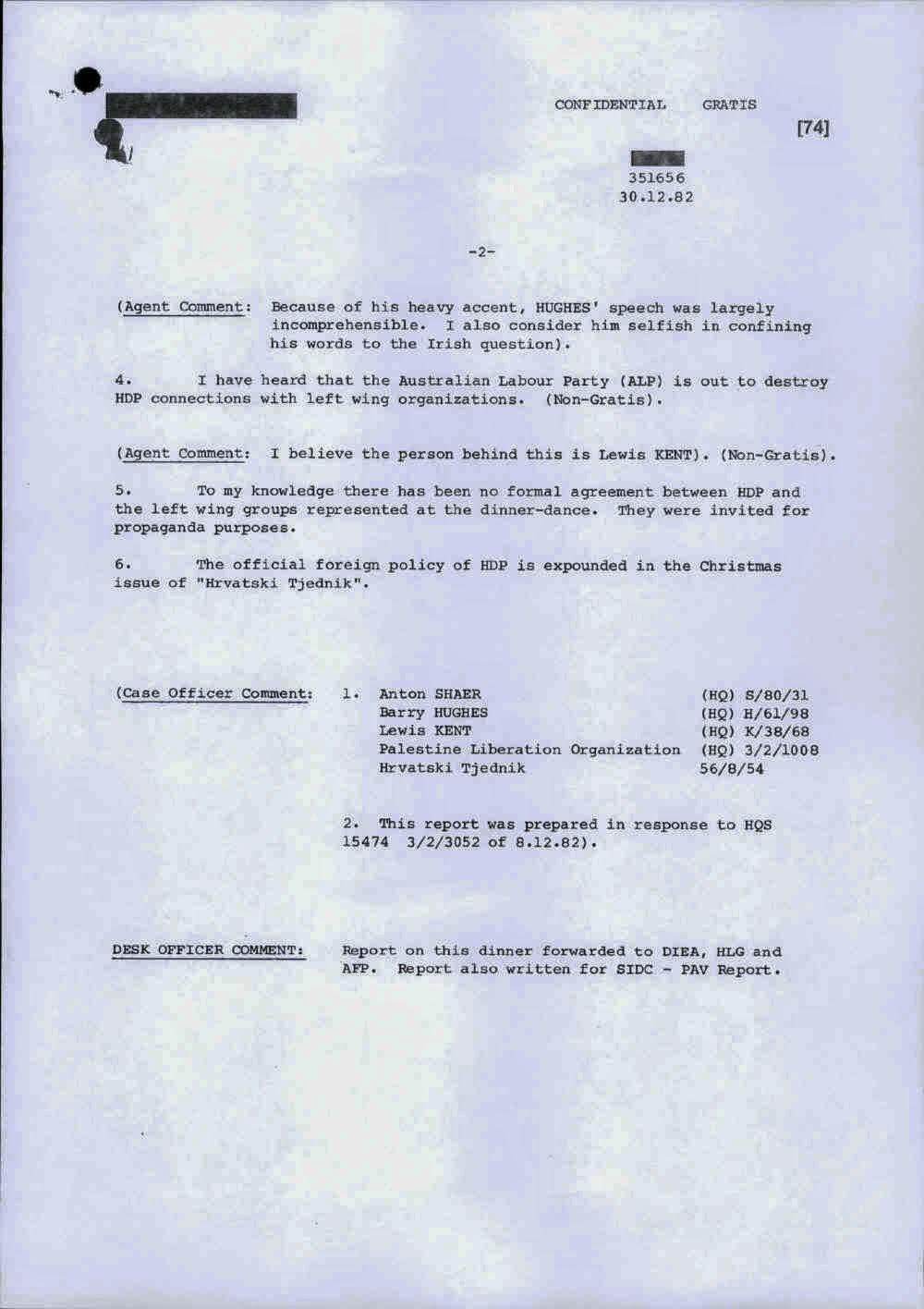 1986 ASIO report: quote: "We now have the extraordinary situation of the AFP doing owner-occupier checks for YIS [Yugoslav Intelligence Service, UDBa/SDB] officers enabling them to carry out intelligence gathering interviews in Aust. [Australia]." 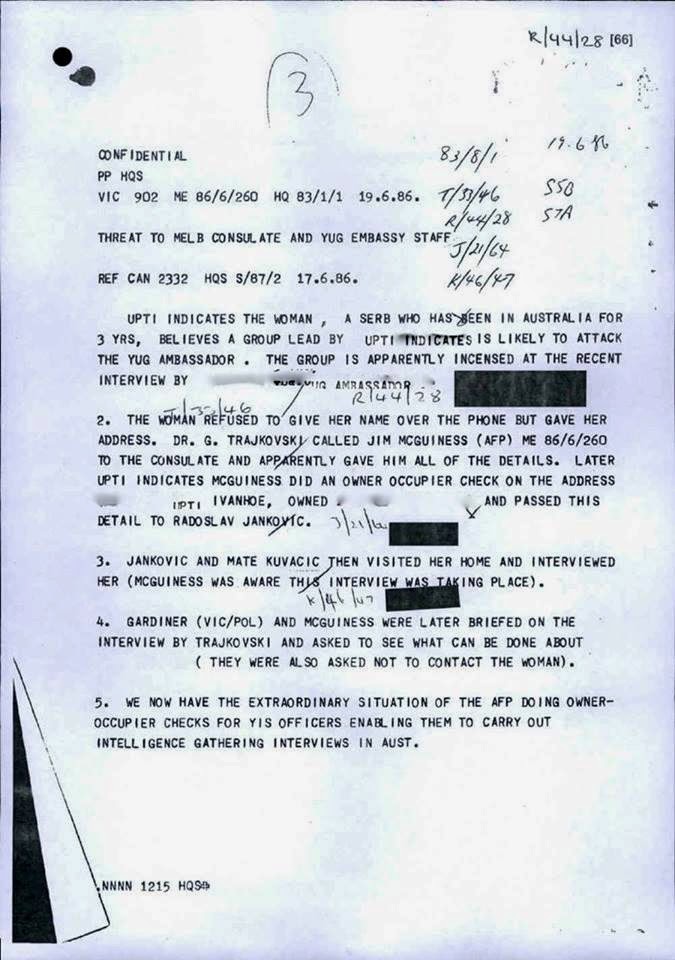 Posted by TEAM UZUNOV at 1:11 PM No comments: