WHAT ASIO DIDN'T TELL YOU 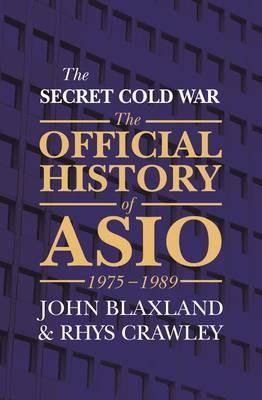 WHAT ASIO DIDN’T TELL YOU


- The Secret Cold War: The Official History of ASIO, 1975-1989 -  Dr John Blaxland & Rhys Crawley.
by Sasha Uzunov
The latest volume of the official ASIO history has been met with enormous interest over its revelations that Australia's counter-intelligence organisation was penetrated by Soviet moles during the Cold War but what ASIO doesn't tell you is that another foreign intelligence service was able to penetrate the Australian Labor Party's Socialist Left faction via the wife of a federal parliamentarian.
Author and academic Dr John Blaxland in Volume 3 of the ASIO history, The Secret Cold War (1975-89) briefly touches upon Yugoslav intelligence (known as UDBa or SDB) operations directed against Australia’s Croatian community, including the infamous Croatian Six case, where six local Croats were set up by an undercover agent posing as a Croat, and were convicted of bogus terrorism in 1981. A travesty of justice. link here and here
Blaxland admits that it was a wrongful conviction, however, the Croatian Six have never been pardoned. Once of those involved in the case included New South Wales detective Roger Rogerson, now discredited as corrupt and in jail for murder over a drug deal gone wrong.
One name that is mentioned in passing by Blaxland is a Yugoslav intelligence officer by the name of Mate Kuvacic, involved in provokatsiya operations - the planting of bombs to make it appear the work of "terrorists" and thereby discredit the cause of dissidents.
Provokatsiya operations was a technique pioneered by the Tsarist Russian secret police called the Ohrana. It involved the use of bogus dissidents used to infiltrate left wing revolutionaries at the end of the 19th century. After the Bolshevik Revolution of 1917, the Soviet government then perfected the use of Provokatsiya and passed it on to satellite states such as Tito's Communist Yugoslavia, before its split from the Soviet bloc in 1948 at the onset of the Cold War.
My own extensive research, applying for ASIO documents via the National Archives of Australia which are now online for public perusal, reveals that during the 1980s Mate Kuvacic was receiving ALP membership applications, from migrants such as Croats and Macedonians who had originally come from Yugoslavia, from Vera Kent, the wife of a then Federal MP, to vet for any anti Yugoslav sentiment.
Declassified ASIO files, which are online, reveal that Vera “Vladislava” Kent, wife of Lewis “Bata” Kent, Australian Labor Party (Socialist Left faction) and Member of Parliament , for the federal seat of Hotham (1980-90) were both “Yugoslav activists” in Australia.
In 1983 Vera Kent, in her powerful position with the Victorian Ethnic Affairs Commission, also handed over list of Victorian migrant organisations to the Yugoslav consul in Melbourne Antun Buneta to vet for anti-Yugoslavist activities. link here and here
Lewis Kent, according to his ASIO file, threatened to burn down Croatian churches in Melbourne during the mid 1960s and had come to the attention of Australia's spooks.
Mate Kuvacic was a very powerful and feared man in Australia - he even had a fellow Yugoslav diplomat, a Macedonian, Nikola Nesovski, removed in 1988 for being too close to Australia's Macedonia's community as well as trying to reach out to the Muslim Bosnian community.
Communist Yugoslavia was a multi-ethnic federation made up of Serbs, Croats, Slovenes, Macedonians, Montenegrins, Muslim Bosnians, Hungarians, Albanians with Serbia playing a culturally hegemonistic role. In 1991 with the rise in Serbian nationalism, Yugoslavia fell apart and descended into a brutal war which later saw the emergence of independent states of Croatia, Slovenia, Macedonia, Bosnia-Hercegovina, Montenegro, Serbia and Kosovo.
The Communist Yugoslav government kept a close watch on emigre Croats, Macedonians and to a lesser extent Serbs in Australia.
Blaxland in his book reveals that Yugoslav intelligence attempted a number of assassinations which were fortunately thwarted by ASIO in the late 1970s and 80s.
A 1969 murder in the quiet leafy Melbourne suburb of Caulfield still remains a Cold Case with Victoria Police. Gay Croat Yago Despot and his Australian partner Alfred Hughes were murdered excecution style, with a single bullet to the head each. ASIO documents reveal that it might have been a Yugoslav intelligence hit on Despot, a lawyer by training and a private detective in Melbourne, who refused to act as an informer within Croatia’s community.
Despot, prior to his death, had contacted ASIO about concerns to his life. link here
SIDE NOTE:
Not much has been published on Greek and Bulgarian espionage in Australia especially against the Macedonian and Turkish communities. TEAM UZUNOV has uncovered some interesting information.
Links here and here and here

Posted by TEAM UZUNOV at 2:50 PM No comments: