A long-time Special Broadcast Service (SBS) Radio journalist with the Macedonian language program had criminal convictions for illegal gambling and attempted bribery of Victoria Police officers, according to a de-classified Commonwealth immigration file (1966-72) lodged with the National Archives of Australia.

Mr Boris Trajkov, who worked for the Australian public ethnic broadcaster SBS (3EA radio station in Melbourne) from 1975 to 2000, was convicted in 1969 of running a cafe/restaurant in the inner Melbourne suburb of Fitzroy where he permitted illegal gambling, known as gaming, to take place in a back room and sold sly grog (illegal alcohol).

In 1991 an official complaint was lodged by a Macedonian community organisation with SBS Management about Mr Trajkov, but no employee police check was conducted, which is mandatory in the Australian public service.

A previous search with the National Archives of Australia has revealed that the Australian Security Intelligence Organisation (ASIO) opened a file on Mr Trajkov because of his close association with diplomats from the then communist Yugoslavia.

In a previous story, parts which were not published for legal reasons, Mr Trajkov denied he had criminal convictions but claimed he was the victim of "mistaken identity."

Mr Trajkov emigrated to Australia in 1967 from then Yugoslav controlled Macedonia, and opened a cafe/ restaurant in Melbourne. 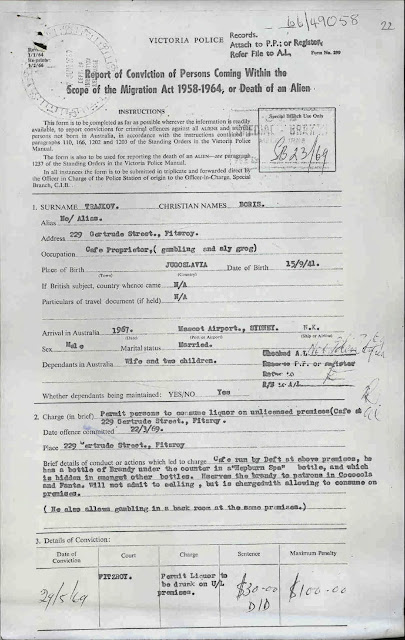 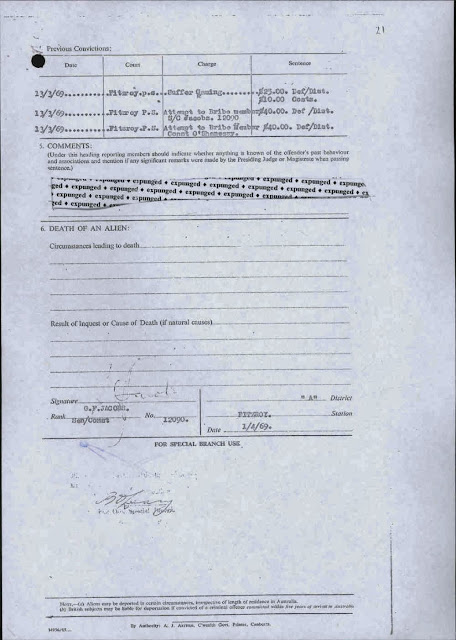 In 1991 The United Macedonians of Victoria organisation wrote to SBS Management and the then Minister for Communications, Kim Beazley, raising concerns about Mr Trajkov's past.

SBS's investigation included asking Mr Trajkov about his past activities, which he denied. No employee police check, which is mandatory for the Australian Public Service, was conducted. Instead Mr Trajkov threatened to take legal action. However, since 1991 no writ for defamation has been lodged with the Victorian Supreme Court by Mr Trajkov.

The letter from SBS Management in response to complaints about Mr Trajkov. 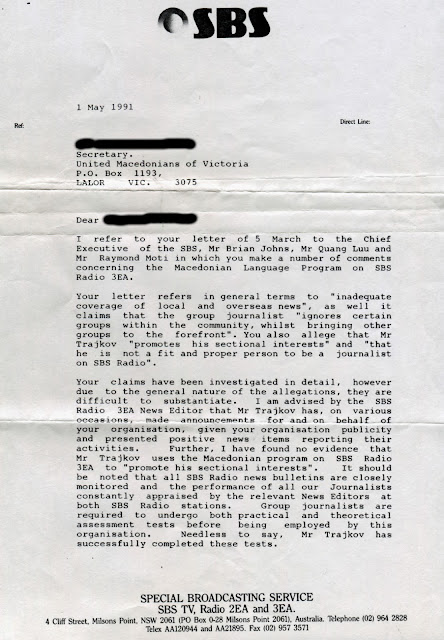 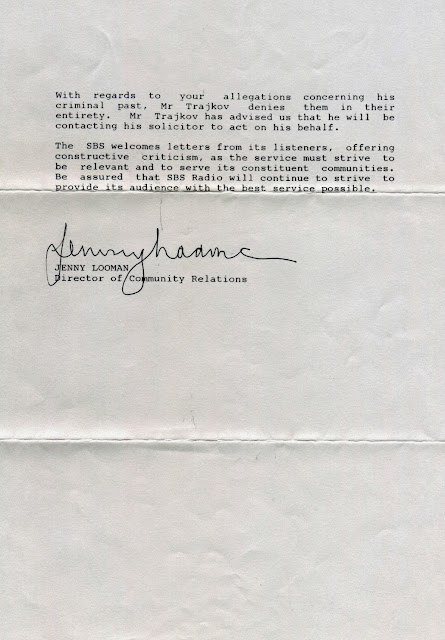 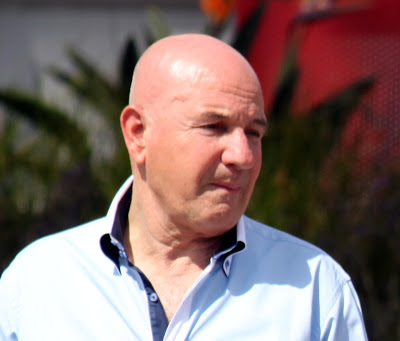 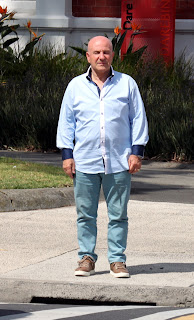 ASIO took an intense interest in Trajkov because of his association with Yugoslav diplomats, including Dr Georgi (George) Trajkovski, the Yugoslav Consul General in Melbourne from 1975-79. 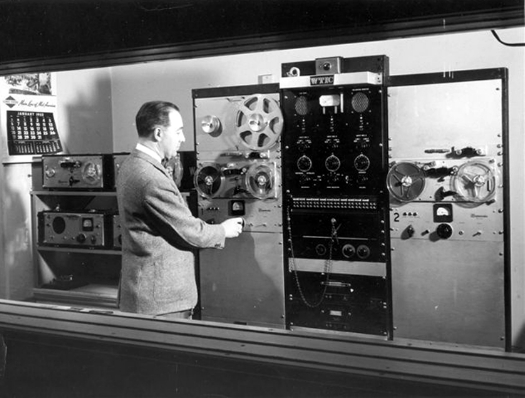 The 66 page file has been placed with the National Archives of Australia and is available for viewing on its website . TEAM UZUNOV applied and was given access to Mr Trajkov's ASIO file after waiting six months. The file covers the period from 1971 to 1983 under the National Archives Act or better known as the 30 year rule.


A sample of the file. 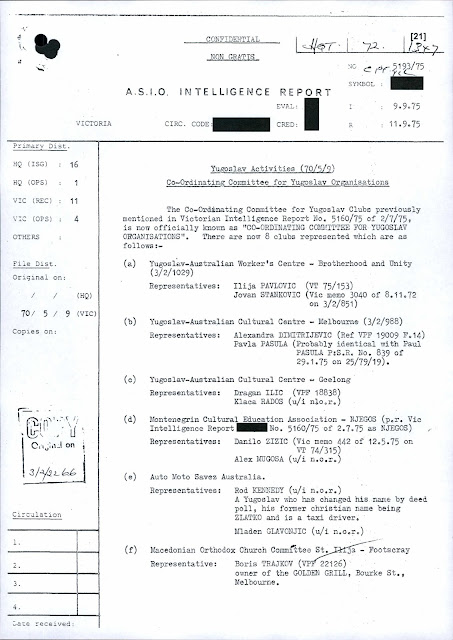 TEAM UZUNOV will be seeking a response from Mr Trajkov and SBS Management.

Tuesday 11 December 2012
MR TRAJKOV's response: THE CONSUL AND I WERE JUST FRIENDS

Mr Boris Trajkov said that he was not surprised that ASIO was monitoring him because of his high profile within both the Macedonian and Yugoslav communities:

"They were doing their job...That was a normal situation...I was one of the most educated people here in Australia when I arrived."

Mr Trajkov, according to the ASIO files arrived in Australia in 1967 from Macedonia, then part of Socialist Federal Republic of Yugoslavia until its independence in 1991.

Mr Trajkov said that ASIO had tried to recruit him as an inside source or informer but had failed.

"I'm sure that I heard that from inside information that they give up because I was too open."

Mr Trajkov was an officer bearer with the Co-Ordinating Committee of Yugoslav Orgainsations, the Australian Yugoslav Welfare Society, and the Sveti Georgi (Saint George) and Sveti Prorok Ilija (Saint Elijah the Prophet) Macedonian Orthodox Churches in Melbourne.  He was also a Macedonian language broadcaster and journalist with SBS Radio (3EA) in Melbourne from 1975 until his departure in 2000.

Mr Trajkov said he was a politician in Macedonia, then within Communist Yugoslavia before migrating to Australia.

Mr Trajkov dismissed claims of anything sinister over his friendship with then Yugoslav Consul General of Melbourne (1975-79), Dr Georgi Trajkovski (pictured below pointing to Yugoslav map on the wall with Australian Prime Minister Malcolm Fraser in 1979) 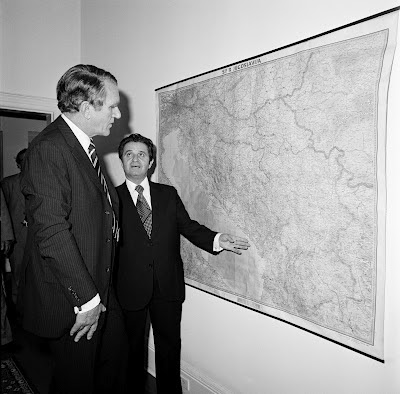 Dr Georgi Trajkovski's ASIO file reveals that he had boasted in 1976 of infiltrating the Croatian and Macedonian communities and putting them under Communist Yugoslav control.

Mr Boris Trajkov said they were good friends who went shopping together but never discussed anything that was not appropriate.

ASIO was interested in Mr Trajkov's restaurant the Golden Grill in Melbourne. 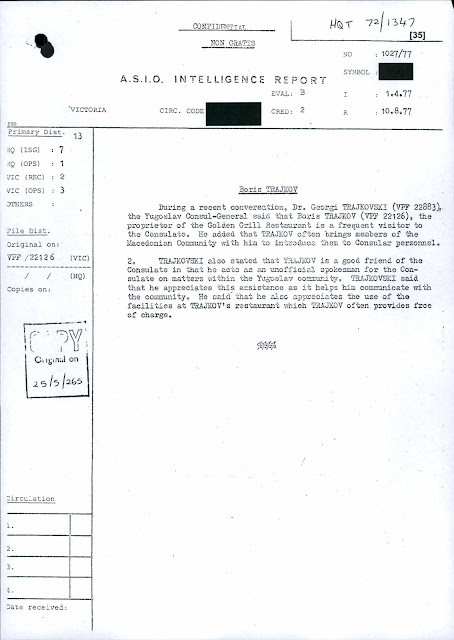 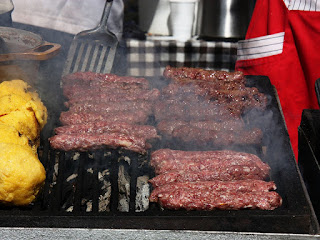 "The restaurant wasn't just a Macedonian or Yugoslav restaurant but a restaurant in general...people coming not just different ethnic groups from Yugoslavia but business people, professional people, many singers from the former Yugoslavia and Macedonia... Many diplomats knew me so they would come for dinner."

Mr Trajkov said he was proud of his achievements both in the Macedonian and Yugoslav communities. He was awarded a Medal of the Order of Australia (OAM) for services to the Macedonian community in 1990.

However, opposition to Mr Trajkov developed in the late 1980s over his driving role, with support from Federal ALP Members of Parliament Dr Harry Jenkins Senior and Lewis "Bata" Kent,  in building an Australian-Yugoslav Welfare Society Childcare Centre in Lalor, in the heart of a large Macedonian migrant population, many of whom were ethnic Macedonians from within the modern borders of Greece and felt marginalised or saw it as a way of dividing the community.

A disillusionment with Yugoslavia began to take hold within the Australian-Macedonian community in the late 1980s as Belgrade was seen as not standing up for Macedonian ethnic rights in Greece. In 1991 Yugoslavia disintegrated into the successor states of Federal Republic of Yugoslavia(Serbia-Montenegro), Croatia, Slovenia, Macedonia, Bosnia-Hercegovina and later Kosovo in 1999. The whole region was racked by war for nearly a decade.

In 1988 The Australian Macedonian Weekly newspaper and its editor Jim Thomev campaigned against Mr Trajkov's Yugoslav Childcare Centre in Lalor as this front page shows: 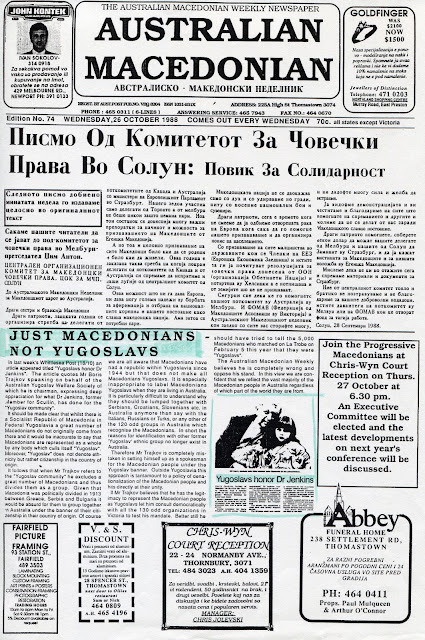 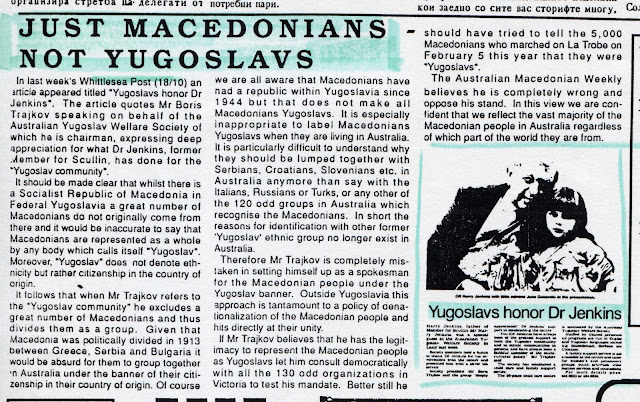 Mr Thomev wrote: "If Mr Trajkov believes that he has the legitimacy to represent the Macedonian people as Yugoslavs let him consult democratically with all the 130 odd organizations in Victoria to test his mandate. Better still he should tried to tell the 5,000 Macedonians who marched on La Trobe [University, in Bundoora, Melbourne] on 5 March this year that they were 'Yugoslav.'" 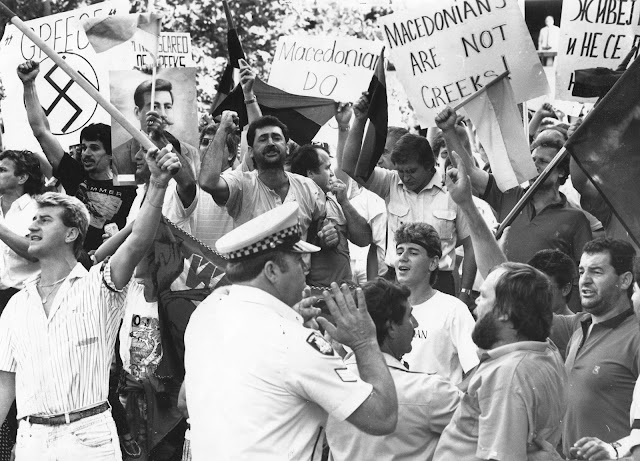 Balkan passions stirred-- the momentous 1988 Melbourne Macedonian community demonstration at La Trobe University against a Greek academic seminar trying to "prove the Greekness of Macedonia. Originally a rallying cry for human rights for ethnic Macedonians living in Greece it also was a turning point in the community's relationship with Socialist Federal Yugoslavia and its refusal to raise the human rights issue with neighbouring Greece.

At a fairwell cocktail party for Dr Georgi Trajkovski in 1979 after completing his term as Yugoslav Consul General in Melbourne, the then Greek Consul toasted the departing Yugoslav diplomat. The ASIO file includes the guest list. 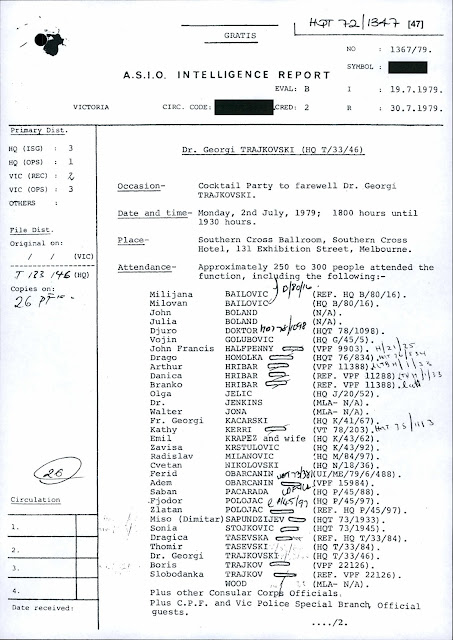 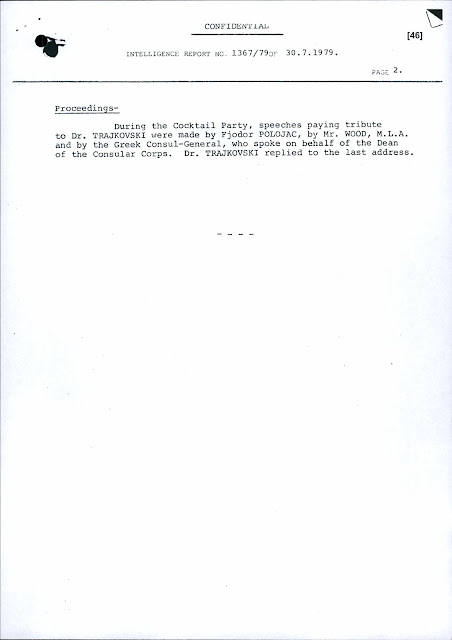 Posted by TEAM UZUNOV at 9:37 PM No comments: