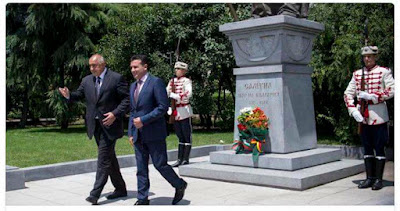 Team Uzunov has invited Dr Chris Popov, a long time Australian-Macedonian human rights activist who has attended a number of international conferences on minority rights and a retired senior public servant with Australia’s Immigration Department to run his expertise over the controversial agreement, being forced upon by Macedonia as condition for Bulgarian support in joining the European Union and NATO, of which Bulgaria is a member. (earlier story at this link). The Agreement, Macedonian version, can be read here in full at this link. 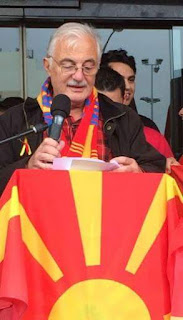 “On 26 June 2017 Macedonian Prime Minister Zoran Zaev (SDSM party) revealed the contents of the proposed Agreement on Good Neighbourliness, Friendship and Cooperation between Macedonia and Bulgaria which will be signed on August 1 in Skopje by PM Zaev and his Bulgarian counterpart Boyko Borissov. In many ways this is less an agreement than a set of conditions that Bulgaria has imposed on Macedonia as the price to be paid for Bulgaria’s support for Macedonia’s ‘Euro-Atlantic Integration’, given Bulgaria’s membership of NATO and the EU. It is an asymmetric agreement between a weak Macedonia and a relatively powerful Bulgaria--powerful only to the extent that Macedonia is willing to accede to its demands--which is prepared to use its muscle to achieve its foreign and internal policy goals. While many of the articles of the Agreement are unremarkable and deal with issues such as trade, commerce, investment and infrastructure, there are several articles which, if implemented in the way that Bulgaria obviously intends, will create the framework for a full-frontal attack on Macedonian identity, statehood, history, culture and language.

"The controversial articles are the following:

"Article 8, clause 2 talks about the formation of a joint multidisciplinary expert commission on historical and educational issues whose goal will be to contribute to an academically based interpretation of historical events which is to be based on “authentic and fact based historical sources”. Given the eagerness of Zaev to appear cooperative, it is hard to imagine that the Macedonian historians serving on this commission will be persons who are willing to vigorously oppose articles of faith of Bulgarian history; namely that Macedonians are Bulgarians and that Macedonian and Bulgarian history are inextricably intertwined. Will this now mean that Macedonian history books for students will be “modified” to exclude language and events which “hinder the new spirit of good neighbourliness?” Will the Bulgarian thesis that Macedonians are in essence ‘‘Bulgarians who are unaware of their Bulgarian roots” or the “product of the Comintern and Tito” now feature prominently in such texts? Will Saints Kiril and Metodij, their disciples (Kliment and Naum etc) and the Old Church Slavonic language be proclaimed as Bulgarian?”

"Article 8, clause 3 prescribes the organisation on the basis of mutual agreement of joint celebrations of historical events and individuals which will contribute to the strengthening of good neighbourly relations in the spirit of European values. Once again given the Macedonian government’s servility and its often expressed belief that “our neighbours can’t be solely to blame for our bad relations” (leaving aside the fact that all of them deny or dispute the existence of Macedonians as a distinct ethnic group), it is quite obvious that Macedonia will be accommodating in this regard as well. Will the Ilinden Uprising be celebrated as a Bulgarian uprising? This will become known in a matter of days with Bulgarian PM Borisov’s presence in Krusevo. Will VMRO [the Ilinden era VMRO], the Ilinden rebellion and the Ilinden leaders and revolutionaries ( Goce Delchev, Nikola Karev, Jane Sandanski, Pitu Guli) also be celebrated as Bulgarian? What of Nazi ally, fascist Bulgaria’s occupation of Macedonia during WWII, during which it committed numerous atrocities and rounded up Macedonia’s Jews and sent them to the Nazi death camps? Will that also be relativised and presented as some form of liberation in order not to prevent the development of “good neighbourly relations

Article 11, especially clauses 3 to 6, represents a dagger in the heart of Macedonia. Clause 4 speaks of the right of each of the parties to defend the rights and interests of its citizens on the territory of the other party, in accordance with international law. Unremarkable enough you would say. However, the so-called “Bulgarian citizens” whose rights are to be defended are overwhelmingly ethnic Macedonians who took out Bulgarian citizenship for economic reasons (and were only granted Bulgarian citizenship if they admitted that they were of Bulgarian ethnic origin). However, in so doing they created a perfect excuse for Bulgaria to meddle in Macedonia's internal affairs and advance the chauvinist thesis that these people are "Bulgarians" who have come back to their roots and, by extension, that all ethnic Macedonians are Bulgars. The trap was set years ago and now Zaev has activated the mechanism whereby Bulgaria will be able to meddle directly in Macedonian affairs by merely defending “its citizens”.

"Point 6 is arguably one of the most damaging parts of this agreement. Namely, the parties are to undertake effective measures to prevent ill-intentioned propaganda by state institutions and agencies and will discourage activities by private persons directed towards the instigation of violence, hate or similar activities which may damage their relations. Hate speech towards Macedonians in Bulgaria is an everyday occurrence as evidenced by the phrase “Macedonians are Bulgarians” which forms the bedrock of Bulgarian political and social opinion regarding Macedonia. There is no definition in the agreement of what constitutes “instigation of violence, hate or similar activities” and this very loose formulation leaves the door wide open to arbitrary interpretations which can be used to censor any type of criticism in Macedonia of Bulgarian policy towards the Republic of Macedonia or the treatment of Macedonians in Bulgaria. It is inconceivable that Bulgaria will take measures to prevent the hate speech represented by the constant denial of Macedonian ethnicity in that country, which has become a mantra of Bulgarian foreign and internal policy or that Macedonia will ask it to do so, given that it is actively courting Bulgaria’s support. So the only logical conclusion is that the Macedonian authorities will use the nebulous definitions in this clause to censure and crack down on opinions by historians, politicians, academics and individuals which Bulgaria finds “offensive”. When asked about this at yesterday’s press conference, Zaev evasively stated that his government would not be engaging in censorship, but would publicly “distance itself” from such opinions. Given his desire to accommodate Bulgarian demands, I suspect such “distancing “may involve something a little stronger than mere statements of condemnation and may include harsher sanctions such as dismissal from work, denial of promotions, fines etc.

“The reason for this was that it allows Bulgaria to continue to refuse to recognise the Macedonian language by in effect being able to state that the language used in the Agreement is Macedonian according only to the Macedonians (or should that be “wayward Bulgarians”?) and their constitution, but not in Bulgarian eyes; all in keeping with their traditional doctrine that Macedonian is merely a Western Bulgarian dialect. Despite the inane and threadbare protestations of Bulgarian Foreign Minister Zaharieva that Bulgaria by using this formulation recognises the Macedonian language, it does not and has no intention of doing so, however this time with Zaev’s (and previously Ljupco Georgievski’s  - Macedonian Prime Minister 1998-2002, VMRO-DPMNE party) official acquiescence.” 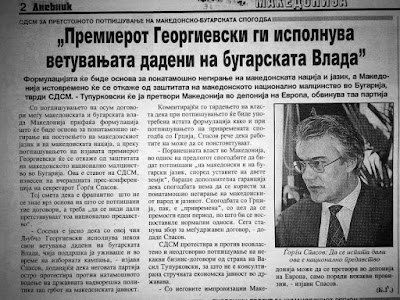 "This Agreement, if ratified with the current reported content, will represent a dagger at the heart of Macedonian identity, language, culture and history and contribute to the weakening of the Macedonian character of the Republic of Macedonia which is under enough pressure as it is from Albanian separatism and Greek nationalist calls for a name change. Nowhere in the Agreement does Bulgaria acknowledge the existence of a distinct Macedonian people, language and identity. Indeed, when Bulgaria recognised Macedonia in January 1992 it explicitly stated that it does not recognise the existence of a separate Macedonian people and language. It will effectively leave the Macedonians in Bulgaria completely defenceless and without any legal protection at all. It will give an emboldened Bulgaria licence to meddle openly in Macedonia’s internal affairs.

"Moreover, given that it represents a shameful capitulation to the interests of Bulgaria, it will embolden Greece, Kosovo and Albania and eventually possibly Serbia to seek further concessions from Macedonia until the state has been reduced to a vassal which compliantly implements the agendas of its USA/EU/ NATO masters and the regional “good neighbours”.

"I have no doubt that this Agreement will be ratified in the Macedonian Parliament, with the active support of VMRO-DPMNE, which has been brought to heel. However, given the vehement opposition of certain Bulgarian extreme nationalist forces which participate in Bulgarian Prime Minister Borissov’s coalition government, there is a chance that Bulgaria may not ratify it. However, once they realise the concessions that Zaev and his government have acceded to and are subjected to arm twisting by the EU and NATO, even these extremist forces may come to the party. Macedonians can no longer rely on any of the major parties and many of the smaller ones to defend their vital national interests. I sincerely hope that they find the strength within themselves to defend their country and identity, as it appears that those internal and foreign forces who wish it ill are preparing to deliver the coup de grace.”
Posted by TEAM UZUNOV at 9:44 PM

I am not sure where you are getting your info, but good topic. I needs to spend some time learning much more or understanding more. Thanks for excellent info I was looking for this information for my mission.
Junk Car Removal