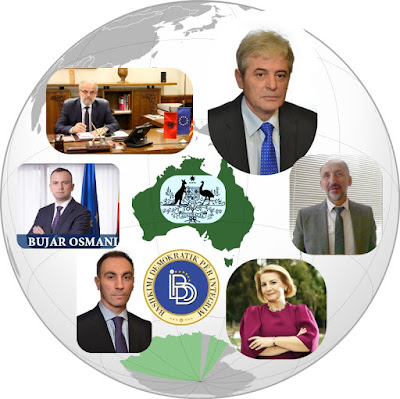 Australia's Home Affairs Department has refused to comment on whether six ethnic Albanian nationalist politicians from Macedonia are prohibited from entering Australia. They belong to the DUI (BDI) party which has supported the building of controversial WW2 Albanian Nazi collaborator statues in Macedonia.

"The Department does not comment on individual cases," a Home Affairs media spokesperson said. And would not elaborate further.

The six are Ali Ahmeti, the leader of DUI, Nevzat Bejta, Bujar Osmani, Deputy Prime Minister in the Zaev coalition government of Macedonia, Artan Grubi, Teuta Arifi, and Talat Xhaferi, the Parliamentary Speaker elected under controversial circumstances in April 2017 which precipitated a riot in the Macedonian Assembly. -more on DUI's extremist ideology at these links here and here and here

Australian authorities have the power to deny an entry visa to individuals it regards as holding extremist views. Holocaust denier David Irving and a variety of US rappers and a host others have been barred in the past - see link

In 2001 the Kosovo Liberation Army’s offshoot, the National Liberation Army led by Ali Ahmeti, invaded Macedonia to take territory for a Greater Albania – when this plan stalled and the terrorists – initially damned by the West - were overnight transformed into aggrieved civil rights activists.

Ahmeti and his crew including NLA field commanders became the genesis of DUI (BDI) as they swapped their weapons and combat fatigues for MP's business suits. Later joined by other commanders such as Nevzat Bejta and Talat Xhaferi.

Bejta as the Mayor of the town of Gostivar and Macedonian government minister built a statue in 2006 to a notorious World War II Albanian Nazi collaborator Xhem Hasa Gostovari who had killed Macedonians and Albanians opposed to fascism during the War. He followed that up with a second Nazi collaborator statue in 2013. Ahmeti has gone on public record that one of his motivations for starting the 2001 war was to ethnically cleanse Macedonians in the west of the country where a large number of Albanians live. Artan Grubi only recently repeated those extremist sentiments. This ideology was shared by Nazi collaborator Xhem Hasa Gostivari.

Because DUI is regarded as pro-US, in fact, a political client which ended up supporting changing Macedonia's name in 2018, the Western media refuse to scrutinise let alone criticise its neo-nazi leanings.

In 2008 courtesy of an amnesty law introduced by the Macedonian government led by Prime Minister Nikola Gruevski who needed to keep coalition partner Ahmeti onside and, no doubt strong-armed by the US in the background, no prosecutions were initiated against the NLA. So Ahmeti who started a war, killed people and set off a chain of evidence that led to other killings, got off scot-free whilst a Macedonian Police reservist Johan Tarculovski did time for war crimes handed down by the International Tribunal at the Hague. It struck many Macedonians as blatantly unfair and selective justice, to say the least.

The interesting thing is a European Court of Human Rights ruling has laid down that war crimes cannot be “pardoned” or “amnestied” yet no Macedonian court is willing to launch an indictment of Ahmeti or any of the NLA leaders in Macedonia. 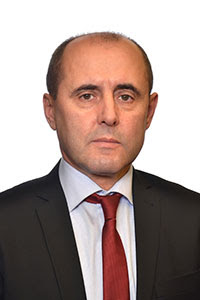 A number of NLA members ended up on various international and US government blacklists relating to terrorism, such as Xhevat Ademi (pictured above) who in 2012 managed to somehow convince or someone else either the Gruevski government or the US behind the scenes managed to convince – the Australian government to allow him entry into Australia as a member of a Macedonian Parliamentary delegation led by the then Speaker, Trajko Veljanoski, a VMRO-DPMNE member. 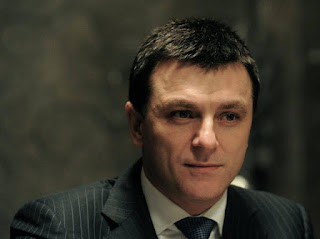 When word reached local community leaders in Australia, it created enormous outrage. Mr Igor A. Aleksandrov (pictured above)  the President now the CEO of the Macedonian Orthodox Community, of Australia, lobbied Australian politicians to ignore Ademi, which they did. Not one Australian State or Federal MP met with Ademi.

It has come to our attention that the Australian Parliament is currently hosting a delegation of the Parliament of the Republic of Macedonia, which includes Djevat (Xhevat) Ademi.

Is the Parliament aware that Mr Ademi was a leader of the racist “National Liberation Army” (NLA), which conducted unprovoked terrorist violence against Macedonian civilian, police and military targets in 2001, and which was described by NATO Secretary-General George Robertson as  “a bunch of murderous thugs whose objective is to destroy a democratic Macedonia and who are using civilians as human shields” in a cynical bid to provoke “another Balkan bloodbath”?[1]

Is the Parliament aware that Mr Ademi has been blacklisted under the US President’s Executive Order 13219, Blocking Property of Persons Who Threaten International Stabilization Efforts in the Balkans, since June 26 2001?[2]  The object of the order was to deal with the threat constituted by “the actions of persons engaged in, or assisting, sponsoring, or supporting extremist violence in the Republic of Macedonia and elsewhere in the Western Balkans region.”  This Order was most recently continued by US President Barrack Obama on June 23 2011, and is still current, with Mr Ademi’s name still on the list.[3]

We understand that the Macedonian Government largely appeased Mr Ademi’s terrorist movement with the “Ohrid Framework Agreement” of 13 August 2001, by caving in to extremist demands for ethnic segregation and privileged positions in all levels of Government and the public service.  However, the Macedonian Australian community almost unanimously condemned that agreement as being racially discriminatory, and as constituting a reward for terrorism that is bound to encourage further use of violence for political ends, including ethnic cleansing and territorial secession.  Our position was consistent with general Australian values of equality before the law, regardless of ethnicity or religion, and with generally consistent Australian policy that terrorist violence must never be tolerated, let alone rewarded.

On August 14, 2001, Mr Ademi was quoted as saying that the Ohrid Framework “agreement was merely an interim solution”,[1]hinting at more separatist violence in future, toward his goal of an ethnically pure Greater Albania.   Mr Ademi’s extremist movement has since obtained further inequitable and unjust concessions from the Macedonian Government by sporadic violence and threats of renewed terrorist attacks.

Mr Ademi has a reputation as a key fundraiser for his extremist movement, including fundraising from abroad.  Given that he has never repented, apologized or been held accountable for his leadership of extremist violence in the past, it would be reasonable to suspect that he would use his Australian visit to incite extremism among the Australian Albanian community, while at the same time gaining legitimacy for his extremist movement by being formally received and honored by Australian politicians.

Over the past four days, there has been growing discontent among the Macedonian Australian community about the fact that Mr Ademi has not only been allowed into the country, but is being received as an honored guest by the Australian Parliament and Australian officials.  We suspect that the Speaker of the Macedonian Parliament has included Mr Ademi in the delegation under duress, in view of his reputation for pursuing political aims by violence or threats of violence. However, that is no excuse for a person blacklisted by the USA for his extremist activity to be received as an official guest of Australia, where we have broad consensus that violent extremists must never be appeased and we even send our soldiers to risk their lives fighting terrorism abroad, as part of a US-led alliance.

We hereby ask you to consider urgent deportation of Mr Ademi from Australia and to ensure that he is excluded from any further meetings or functions with Australian officials.

We have no objections to any Australian officials receiving the remainder of the delegation led by the Speaker of the Macedonian Parliament, Mr Trajko Veljanovski.  In fact, we applaud the efforts towards improved relations between Australia and the Republic of Macedonia. However, we encourage Australian officials to show full respect for the right to self-determination and self-identification of the Macedonian people, by refraining from the use of unwelcome references such as “Former Yugoslav Republic” of Macedonia or “FYROM”.

We look forward to your urgent reply to our community’s concerns.