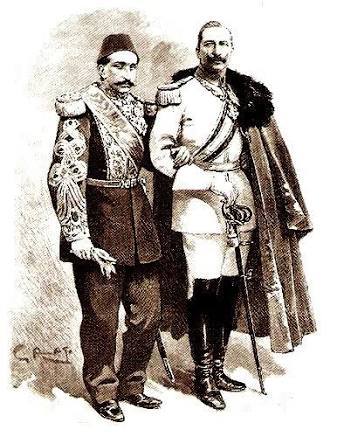 The Ilinden Uprising was a Macedonian rebellion launched on 2 August 1903 - St Elijah’s Day hence the name in Macedonian Ilinden - after nearly five centuries of harsh Turkish Ottoman imperial rule. A number of earlier rebellions had been crushed by the Turks. The Ilinden Uprising threatened Ottoman rule so much so it sent the ruler, the Sultan, into a panic. Imperial Germany sensing an opening in gaining economic and political clout in the Balkans gladly offered its assistance in putting down the rebellion. 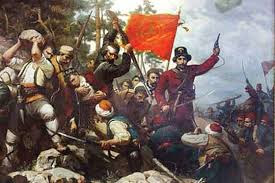 To begin with, it was an asymmetrical war - the numerically superior Ottoman Army against Macedonian insurgents known as komiti (comitadji). With the formation of the Internal Macedonian Revolutionary Organisation (VMRO) in Salonica in 1893 by Macedonian intellectuals, writers, military adventurists, a serious of skirmishes, battles involving the komiti and the Ottoman Army began - ranging from hit and run tactics, ambushing, classic guerrilla warfare to use of “terrorism” such as bombing the Ottoman Bank in Salonica to taking hostages such as American missionary Ellen Stone in 1901 in order to gain funds for VMRO to wage an independence war.

The Second Boer War (1899-1902) pitted Dutch Afrikaner settlers known as Boers against the might of the British Empire. The Boers used mobile guerrilla tactics against a superior but cumbersome British Army which lost the initial battles. British strategists such as Lord Kitchener (pictured below) devised some fiendish tactics to defeat the Boers: 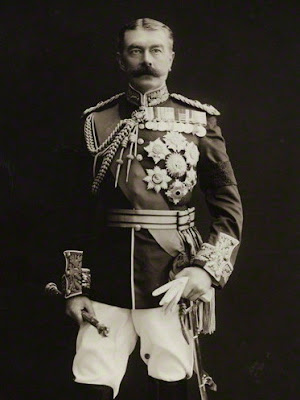 The counterinsurgency techniques and lessons (the restriction of movement, the containment of space, the ruthless targeting of anything, everything and anyone that could give sustenance to guerrillas, the relentless harassment through sweeper groups coupled with rapid reaction forces, the sourcing and coordination of intelligence, and the nurturing of native allies) learnt during the Boer War were used by the British (and other forces) in future guerrilla campaigns including to counter Malayan communist rebels during the Malayan Emergency (1948-60). In World War II the British also adopted some of the concepts of raiding from the Boer commandos when, after the fall of France, they set up their special raiding forces, and in acknowledgment of their erstwhile enemies, chose the name British Commandos. - citation - see link here
----
An Imperial German Army artillery officer by the name of Baron Hugo Von Goeben - then a Captain - resigned his commission and went to fight for the Boers against the British. The tactics he observed employed by the British he later used against Macedonian insurgents on behalf of the Ottoman Empire in 1903. After his tour of duty in South Africa, he rejoined the German army and was sent by the German Kaiser to advise the Sultan of the Ottoman Empire on crushing a Macedonian rebellion, the Ilinden Uprising in 1903 which sought to throw off five centuries of Turkish colonial rule.

Von Goeben was the mastermind of a brutal campaign during the Ilinden Uprising - as mentioned later in the British press in 1915:

"At this critical moment, the German Emperor [Kaiser] stepped in to save the situation. Serving in the Great General Staff at Berlin was a Prussian officer, Captain von Goeben, who, under De Wet, had fought against us [Britain] throughout the South African War, and who therefore had first-hand knowledge of Lord Kitchener’s system of "drives."

"Drives, said the Emperor to the Sultan, might solve the Macedonian problem. Von Goeben, accordingly was despatched at once to the Turkish army headquarters at Monastir [Bitola], where, for all practical purposes, he assumed complete command.

"Drives were duly organised, the Turkish soldiery being strengthened by Arnauts, or Albanian bashi-bazouks, and the riffraff of the Turkish towns. Von Goeben was successful. Failing to catch the comitadjis, who remained in the forests and hills, he arranged to round up their less mobile relatives and friends instead. Villages were destroyed wholesale. Old men, women, and children were mercilessly slaughtered and in the most disgusting manner.” see link here 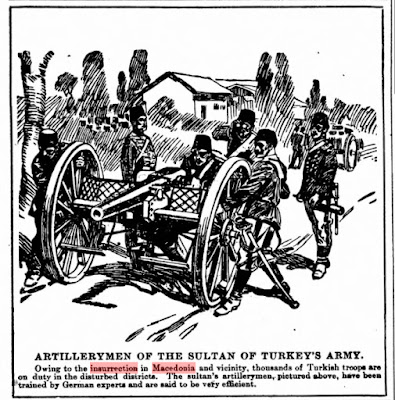 In 1912 an unnamed Western diplomat writing for an American newspaper claimed that he had first hand knowledge of Germany's role in crushing the Ilinden Uprising: "in 1903 the Macedonian insurrection had to be suppressed by the German government," he wrote.

- REPORTS OF THE REPRISALS

Report (above) from The True Republican newspaper, Ilinios, US, 30 September 1903, link here

Women and Children Massacred
Berlin, Aug. 17. —According to a dispatch received by the Frankfurt Zeitung, the river near Monastir [Bitola], Macedonia, is full of the mutilated bodies of women and children who have been massacred by Bashi-Bazouks [Albanian irregular troops in Ottoman Army]. 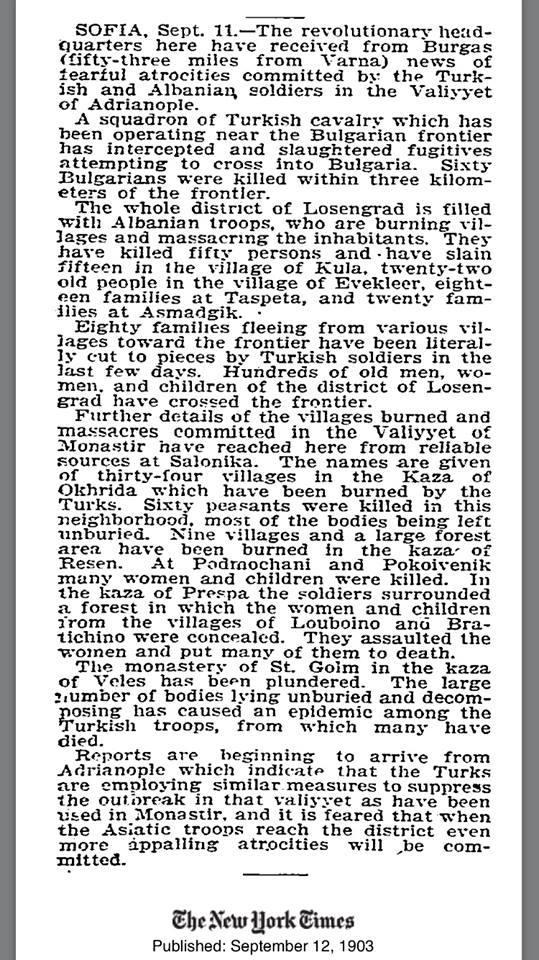 BULGARS?
It was common for British and American pundits and reporters in the early stages of the 20th century to call incorrectly Macedonians as “Bulgars,” which at a later date created much confusion. Bulgar was a generic term meant as a “Christian Slav" who had come under the religious jurisdiction of the Bulgarian Exarchate Church as opposed to the Greek Patriarchate Church. The Sultan had permitted to both these Orthodox Churches to operate in Ottoman-ruled Macedonia. 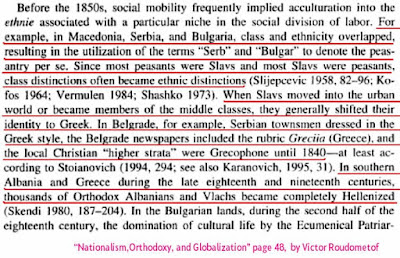 You can find accounts of Ukrainians called as “Little Russians.”

In 1908 Allen Upward led an "expedition" which became a book The East End of Europe, into deep dark Ottoman Macedonia - pardon the Joseph Conrad Congro overtones -and entered a village in which the locals called their language as Macedonian not Bulgarian.

Upward elsewhere in his book claimed that this was part of a secret Bulgarian attempt to annex Macedonia from the Ottomans by creating bogus Macedonians. Such a preposterous conspiracy theory was widely popular at the time but in late Victorian/early Edwardian England and in reality it was based on ignorance and dare I say it racism. 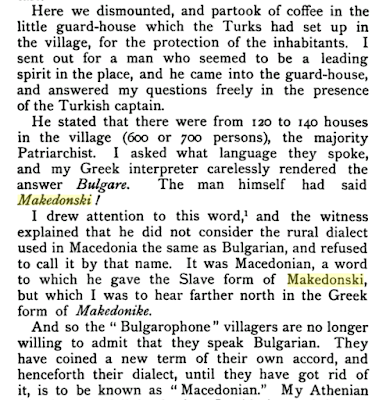 Another -less haughty -British source reveals that Macedonians did not regard themselves as Bulgarians.

A 1926 British Foreign Office report from diplomat RA Gallop who had visited the part of Macedonia which had come under Serbian colonial rule after it was partitioned in the 1912-13 Balkan Wars by Serbia, Greece, and Bulgaria, who had combined to defeat the Ottoman Empire.

Gallop had spoken to some local Macedonians in Skopje who emphatically told him they were Macedonians not Serbs nor Bulgars. 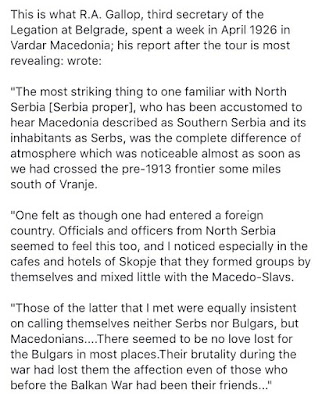 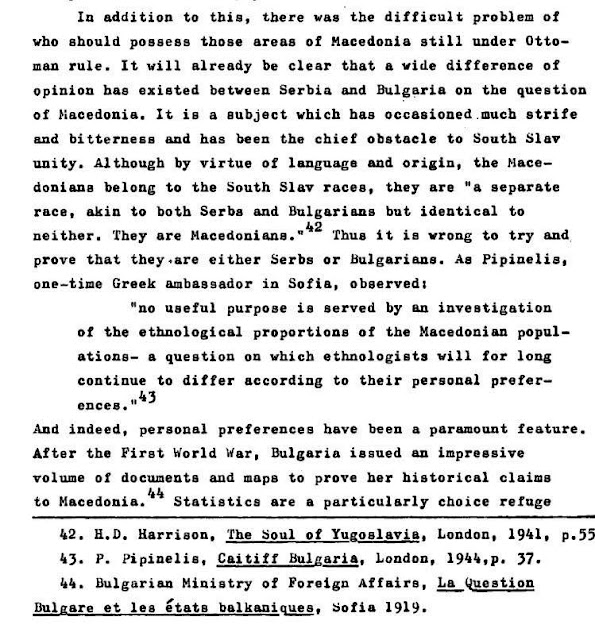 British journalist and author Joseph Swire in his 1939 book, the Bulgarian Conspiracy, page 51, explains that Bugar [Bulgar] denoted serf or labourer and Greek, a wealthy or educated person, and not necessarily meaning an ethnic identity during Ottoman rule in the Balkans

What is clear is the major leaders of the Ilinden Uprising -including the prelude to it - such as Goce Delcev and Dame Gruev made a clear distinction between Macedonian and Bulgarian. In fact Bulgaria played a role in suppressing the Ilinden Uprising. 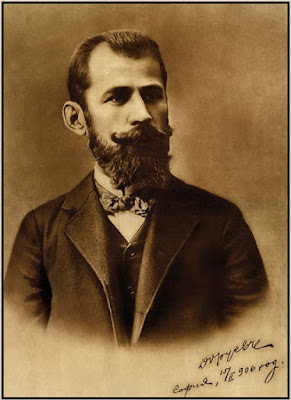 ----
DAME GRUEV -
A1906 American press report had this to say about Dame Gruev (pictured right), one of the leaders of the 1903 Ilinden Uprising:

"They are apostles of a proletarian insurrection that shall establish on Macedonian soil the first socialist republic of the world. Hence they ceaselessly propagate the sentiment of independence from foreign air.

"They decry the help of "kings and bishops" and pin their faith on the organized workingmen of Europe. To the central body of the revolutionists, headed by its chief, Grueff [Dame Gruev], the failure of Europe to institute a thorough-going international control with a European governor-general is a vital blow, for their dream, is to make autonomous Macedonia a nucleus around which will coalesce in time the Balkan United States.

"This body which is now in control maintains an attitude of reserve towards official Bulgaria, being unwilling to receive favors at the price of obligation. it is permanently opposed to any annexation of Macedonian territory by the principality of Bulgaria. This has always been the settled policy of the organization...” 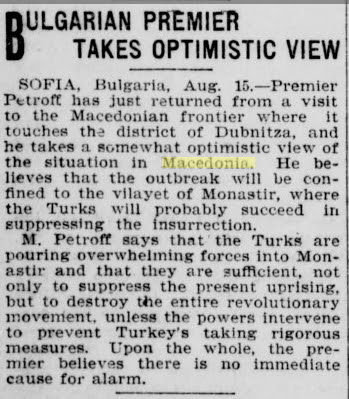 Los Angeles Herald - 16 August 1903 - The Bulgarian Prime Minister of the day looked upon the brutal crushing of the Ilinden Uprising as being “optimistic” and acknowledged that it had been largely confined to the Bitola [Monastir] region in Macedonia - de facto recognising no link to any Bulgarian role in the rebellion. see link 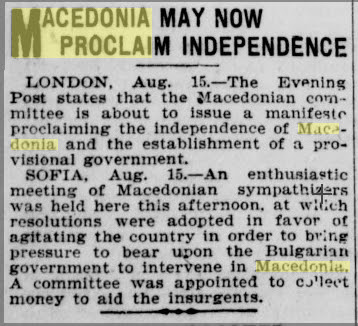 OPPOSED TO PAN-GERMANISM AND PAN-SLAVISM - The Macedonian movement 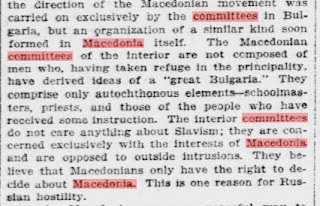 US report spells out that Macedonians in the "interior" are not interested in Bulgaria nor Slavism but are "autochthonous elements" (native).

"The Macedonian committees of the Interior are not composed of men who, having taken refuge in the principality, have derived ideas of a "great Bulgaria.' They comprise only autochthonous elements— schoolmasters, priests, and those of the people who have received some instruction. The interior committees do not care anything about Slavism; they are concerned exclusively with the interest of Macedonia and are opposed to outside intrusions. They believe that Macedonians only have the right to decide about Macedonia. This is one reason for Russian hostility."

1902 -Macedonian revolutionary leader warned that Pan Germanism stood in the way of the upcoming Macedonian Uprising [1903 Ilinden] succeding against the Ottoman Empire ! 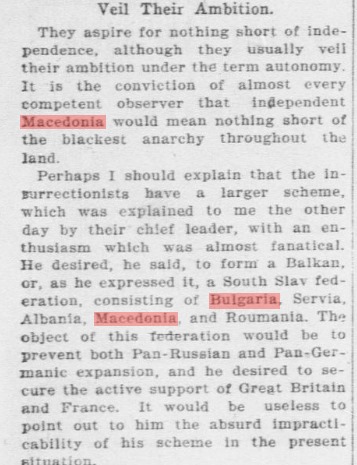 1903 An American eyewitness account - the prelude to Ilinden Uprising 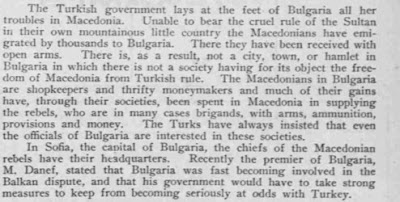 Macedonians who emigrated to Bulgaria to escape Ottoman terror were supporting Ilinden Uprising with cash and weapons, not the Bulgarian government which was staying out of it


A 1939 book review in the Australian press of British journalist and author Joseph S. Swire's book, the Bulgarian Conspiracy:


"For three years Mr. Swire lived in Bulgaria as correspondent of the New York Times and Reuters. He met and talked with terrorists and conspirators, and his book is an attempt to place the famous, or infamous. IMRO (Internal Macedonian Revolutionary Organisation) in its proper perspective. Briefly, this is his history of the IMRO: It was founded near the end of the last century as an organisation of terrorists whose aim was to free the Turkish controlled portion of Macedonia.

"The ruling class in Bulgaria, however, feared that it might struggle for the independence of Macedonians in Bulgaria. So the ruling class gradually gained control of it and, retaining the name, used it us an instrument of terrorism to gain political ends. That meant that it became 'Bulgarian,' rather than 'Macedonian.'"  - Sunday 25 June 1939 - Sunday Mail (Brisbane) link here

In 1908 Von Goeben later met his own grisly fate: he murdered the husband, a fellow German officer, of his mistress before committing suicide to avoid execution. see link here 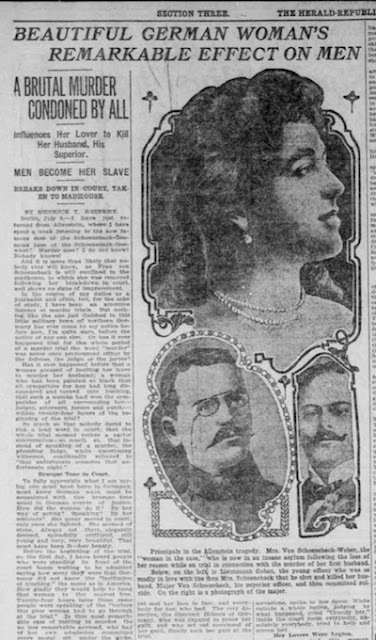