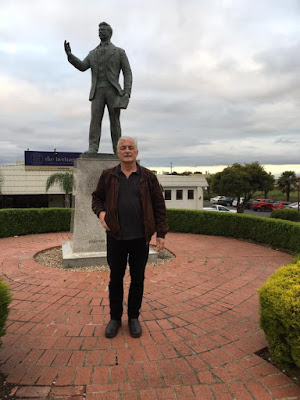 The last week has witnessed a veritable avalanche of statements from Bulgarian officials such as Prime Minister Borisov, Deputy Prime Minister Karakachanov, Foreign Minister Zaharieva, Euro MPs Kovachev and Djambazki, and a panoply of Bulgarian “historians” serving on the Joint Macedonian-Bulgarian Historical Commission (set up as a result of the Agreement on Good Neighbourliness between Macedonian and Bulgaria signed on 1 August 2017 with the express task of revising Macedonia’s history to make it more palatable to the Bulgarian view that “ Macedonians are Bulgarians”) claiming that Macedonia’s greatest national hero and revolutionary, Goce Delchev, is Bulgarian and that the Ilinden Uprising (the foundation stone of Macedonian statehood) was a “ Bulgarian phenomenon”. Yesterday in an attempt to burnish his non-existent reputation as a statesman Borisov stated that “ Goce Delchev is the Bulgarian Che Guevara … who gave everything he had for the freedom of Macedonia”

Not to be outdone Macedonian President Stevo Pendarovski, in a feeble display of servility, stated that “it is indisputable that Delchev identified as a Bulgarian”, whereas Macedonian Foreign Minister Nikola Dimitrov who is known for his slavish, pro-NATO/EU orientation, opined that “I am not a historian who is able to say how Delchev identified."  - More on Stevo Pendarovski at this link here

Dragi Georgiev, the Macedonian historian leading the Macedonian team participating in the joint historical commission, stated last week that “Delchev had a Macedonian political identity”, leaving open the way for Delchev’s Macedonian ethnicity to be speculated upon so as not to anger Bulgaria which has the right to veto Macedonia’s accession to the EU and NATO.

The historical revisionism emanating from Sofia of late and its attempt to misappropriate indisputable Macedonian heroes and historical events are the result of its centuries-long denial of a distinct Macedonian ethnicity, identity and language and its desire to justify its annexation of Pirin Macedonia in 1913. It is also an attempt to stake a claim to territory in the Republic of Macedonia should it be dismembered in the future. 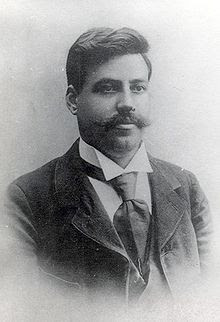 However, back to Delchev. What is indisputably indisputable is the fact that Goce Delchev (1872-1903) was an ethnic Macedonian patriot whose overriding goal was to secure the establishment of an independent Macedonian state by revolutionary means. He did not fight for its union with Bulgaria or subservience to that state. He was fiercely opposed to Greek, Bulgarian and Serbian attempts to subjugate the Macedonian revolutionary movement to the expansionist goals of those monarchies. It is true that Delchev studied at the Bulgarian Military Academy, however, he did not wish to obtain a rank as a Bulgarian officer. He wanted to obtain military skills to use in Macedonia but did not want to be used by the Bulgarians which is why he deliberately connived to be expelled once a month before being awarded his rank. In 1895, in a letter to Efrem Karanov, he wrote that he viewed Macedonian as a “ free little state”. Also in 1895, he stated the following to the Bulgarian Supremacist general Danail Nikolov:
“Let it be known that we do not seek sponsors, and even less do we seek masters."

Moreover, in 1895, the so-called Bulgarian Delchev removed the word “Bulgarian” (as a noun and adjective, which had been included two years earlier) from the Constitution of the Secret Macedonian Revolutionary Organisation and replaced it with Macedonian and Odrinian ( Thracian).  The claim that Delchev is a Bulgarian because he wrote in literary Bulgarian is not only fallacious but bordering on the ridiculous. It is like saying that overseas Asian students in Australia become “Australians” because they study in (Australian) English. In addition, Delchev was born in Kukush in Aegean Macedonia (that part of Macedonia now within the borders of the Greek state) and his spoken language would have been informed by the local Kukush dialect of Macedonian. In addition, the literary Bulgarian language was not codified until 1899, 4 years before Delchev’s death.

Delchev was also concerned about the lack of literature in Macedonian. He would state in this regard: “Is there really no one to write at least one book in Macedonian?”. He encouraged authors such as Atanas Razdolov to write in that vein and Razdolov obliged by writing poetry opposing Bulgarian, Serbian and Greek propaganda and in favour of an independent Macedonian state.

In his letters to Nikola Malesevski, Delchev was emphatic about his Macedonian origin and ethnicity. On 22 April 1897, he would write to Malesevski: “Is there a people which has endured such hardship at the hands of its own sons and traitors as the Macedonian people.?” Bulgarians make much of Delchev’s letter to Malesevski of 5 January 1899 in which he wrote: “But what can we do when we are Bulgarians”. This letter was written at a time of serious conflict between the Macedonian Revolutionary Organisation led by Delchev and the Pro-Bulgarian Supremacists in Sofia and Salonica which included mutual death threats. His ironic use of the word “Bulgarian” was to highlight the  fact that his enemies were Macedonian pro-Bulgarian spies under the influence of Bulgarian Exarchist and Supremacist political propaganda  who wished to harm the movement; what he meant by this is- we are having problems because our people are acting in Bulgarian interests”, not that they were ethnic Bulgarians .

On 12 January 1903 Pero Javorov, Delchev’s fellow chetnik (member of his guerrilla group) recorded one of his (Delchev’s) last messages in his shorthand notes, namely: “We will tear away the black veil which hangs over us and the sun of freedom will shine upon us, but It WILL NOT UNDER ANY CIRCUMSTANCES BE A BULGARIAN SUN”.

Delchev’s wish was for him to be laid to rest in the capital of free Macedonia and in 1946 his remains were handed over to the Republic of Macedonia by Bulgaria in 1946. He was laid to rest in the church Sveti Spas in Skopje, Macedonia after his remains had been kept for many years in a storeroom of an office of the Makedonsko Bratstvo (Macedonian Brotherhood) in Sofia. If he was “Bulgarian” why did he not request that he be laid to rest in Sofia and why did they Bulgarian authorities not afford him a dignified place of burial in Sofia before 1946 if he was a “famous Bulgarian son”?.

The fact that they did not do so signifies that they wanted to keep the lid on Macedonian nationalism and pride.

If Bulgaria so reveres Delchev as one of their most eminent heroes why in 1991 did the Bulgarian authorities consider changing the name of the city named Goce Delchev in Pirin Macedonia to Nevrokop, the name it previously had?

Finally, Borisov’s claim that Delchev is the Bulgarian Che Guevara is ludicrous, anachronistic ahistorical and amateurish in the extreme. Che Guevara, unlike Borisov and the Bulgarian political establishment in the case of Macedonia and Macedonians, did not fight to change the identities and ethnicities of the nations of Latin America, their history, culture or to claim their territory. He fought for the triumph of socialism, true independence for Latin America free from American tutelage and social justice, in the same way, that Delchev, the socialist and anarchist, fought to establish a Macedonian, not Bulgarian, independent state in which the rights of all would be respected. Delchev was and still is the epitome of the Macedonian struggle for independence and statehood and for the rights of the Macedonian people to respect and dignity. Borisov is the antithesis of this. Che Guevara is rather the Argentinian Goce Delchev.

The dispute over Goce Delchev’s ethnicity and national identity is not an obscure historical and diplomatic matter which is irrelevant to current relations between Macedonia and Bulgaria. Bulgaria’s outrageous intervention has definitely made it so  In disputing Delchev’s Macedonian identity and ethnicity Bulgaria wishes to undermine the Republic of Macedonia’s independence, sovereignty and security by imposing its ultranationalist thesis that “all Macedonians are Bulgarians”, a historically fallacious claim which denies Macedonians their basic, inalienable human rights. This is why this outlandish claim and the current quisling Macedonian government’s accommodation of it must be resolutely opposed. It is literally a matter of life and death for the Macedonian people. 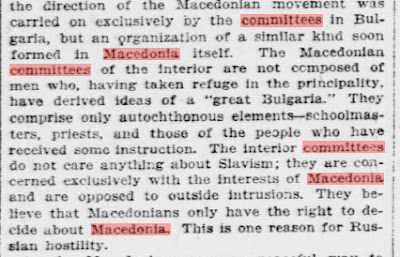 US report spells out that Macedonians in the "interior" are not interested in Bulgaria nor Slavism but are "autochthonous elements" (native).

"The Macedonian committees of the Interior are not composed of men who, having taken refuge in the principality, have derived ideas of a "great Bulgaria.' They comprise only autochthonous elements— schoolmasters, priests, and those of the people who have received some instruction. The interior committees do not care anything about Slavism; they are concerned exclusively with the interest of Macedonia and are opposed to outside intrusions. They believe that Macedonians only have the right to decide about Macedonia..." 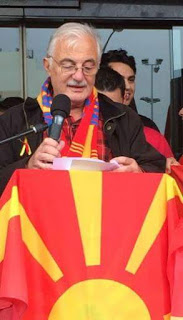 * Dr Chris Popov is a long time Australian Macedonian activist previously involved in a number of international human rights conferences. He is a retired Australian public servant with service in the Federal Immigration Department. Dr Popov is fluent in many languages including English, Macedonian and Spanish and others.
His previous story was on the controversial Prespa Agreement signed between Greece and Macedonia - link here